Commissioned in June of 1942, Roma managed a service life with the Italian Navy just until September of 1943 when she was sunk by the Germans.

Authored By: Staff Writer | Last Edited: 07/10/2017 | Content ©www.MilitaryFactory.com | The following text is exclusive to this site. 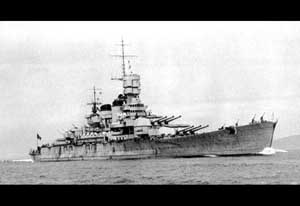 The Italian Fleet in Mediterranean waters was a major concern for the Allies during World War 2 (1939-1945) as it directly impacted operations centered on both North Africa and the European Mainland. Multiple attempts by the British Royal Navy were made to neutralize the force including the famous Attack on Taranto during November 1940 which cost the Italians one battleship (two more damaged) among other vessels. Roma became one of four warships (only three were eventually completed) belonging to the pre-war Littorio-class group of fighting ships. Initially, the class was to number two and marked an Italian step to keep pace with potential enemies in France and Britain concerning the Mediterranean. When it was seen that the original pair might not suffice, an additional pair of warships was added based on the Littorio standard. However, this gap allowed several improvements to be enacted upon Roma and her sister, Impero, prior to their commissioning.

Roma was ordered in 1937 and built by Cantieri Riuniti dell-Adriatico. Her keel was laid down on September 18th, 1938 and she was commissioned for service on June 14th 1942 - by this time, the nation of Italy was fully embroiled in World War 2.

As completed, Roma displaced 45,500 tons under full load. She held a length of 790 feet, a beam of 108 feet, and a draught of 31 feet. Power was served from 8 x Yarrow boilers feeding 4 x Steam turbines developing 128,000 horsepower to 4 x Shafts. Aboard were 1,920 personnel and the warship carried three floatplanes (launched via single catapult) for over-the-horizon and artillery-spotting work. Armor protection ranged from 14" at the main belt to 10" at the conning tower.

Despite being commissioned in June of 1942, Roma could do little in action for the Italians faced resource shortages which left Roma to sit and act as an impressive floating air defense platform denying airspace over strategic areas. Allied bombing missions against La Spezia resulted in considerable damage to the warship in June of 1943 but she did not sink.

When the Italian surrender arrived in September of 1943, Roma left with an Italian Navy contingent for Malta where internment would take place. While en route and at the Strait of Bonifacio (running between the islands of Corsica and Sardinia), she and the fleet were attacked by German bombers (utilizing radio-controlled "Fritz-X" bombs). Suffering damage, Roma pressed on but was eventually done in by additional bombs, one which penetrated her decks and detonated a forward ammunition area resulting in catastrophic damage. She went down in full along with some 1,393 of her crew. Her sisters Littorio and Vittorio Veneto made it safely to Malta where they were successfully interned.

The wreck of Roma was not discovered until June of 2012.©MilitaryFactory.com
Note: The above text is EXCLUSIVE to the site www.MilitaryFactory.com. It is the product of many hours of research and work made possible with the help of contributors, veterans, insiders, and topic specialists. If you happen upon this text anywhere else on the internet or in print, please let us know at MilitaryFactory AT gmail DOT com so that we may take appropriate action against the offender / offending site and continue to protect this original work.
Advertisements

(Not all weapon types may be represented in the showcase above)
3 x Navy Floatplane Aircraft (recoverable), typically Reggiane Re.2000 or IMAM Ro.43 series. 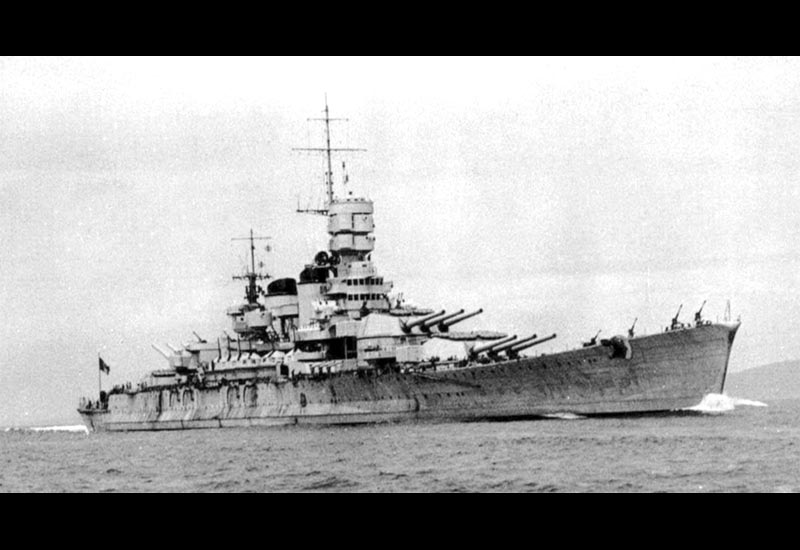