Authored By: Staff Writer | Last Edited: 08/11/2021 | Content ©www.MilitaryFactory.com | The following text is exclusive to this site. 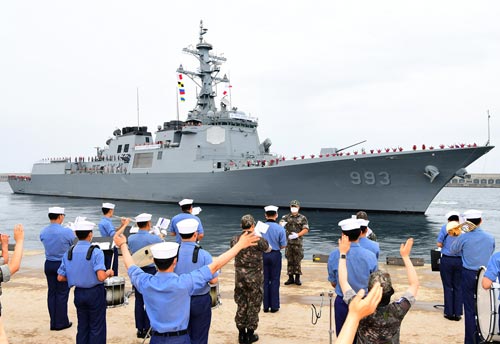 ROKS Seoae Ryu Seong-ryong (DDG-993) forms the third of three active (2021) guided-missile destroyers of the Sejong the Great-class. The class is expected to encompass six total ships built to the design standard and is led by ROKS Sejong the Great (DDG-991) herself. ROKS Seoae Ryu Seong-ryong was constructed by the specialists of Hyundai Heavy Industries (HHI) of South Korea and was launched on March 24th, 2011. She was formally commissioned into the inventory of the Republic of Korea Navy (RoKN) on August 30th, 2012.

The class exists as a multi-mission / multirole warship in the 7,650 ton range, displacement ballooning up to 10,600 tons under extreme full loads. ROKS Sejong the Great represents the first of the Batch I warships concluding with ROKS Seoae Ryu Seong-ryong before the shift to Batch II ships in the class. The type serves as one of the more important surface combatants available to the South Korean Navy in the frontline role, capable of deterring and engaging air, land, sea, and undersea targets with equal lethality. Sejong the Great-class ships are broadly comparable to the American Navy's Arleigh Burke-class if only dimensionally larger with qualities more akin to a cruiser than traditional modern destroyer.

The destroyers are fielded with two other classes, the "Destroyer Helicopter" minded Chungmugong Yi Sunshin-class (six ships) and the older Kwanggaeto the Great-class (three ships).

Like other modern ships in the South Korean fleet, ROKS Seoae Ryu Seong-ryong is the product of the Korean Destroyer eXperimental (KDX) initiative seeking to equip the Navy service with a broad range of destroyer types to accomplish enhanced roles at different displacements. This includes the 3,800-ton "KDX-1", the 5,500-ton "KDX-II", the 11,000-ton "KDX-III" (with Aegis), and finally the 5,500 to 7,500-ton "KDX-IIA" (also with Aegis). The core value is a complete modernization of fighting strength for the service which is regularly tested by neighboring North Korea and China in the region.

As completed, ROKS Seoae Ryu Seong-ryong sports a running length of 544.6 feet, a beam of 70.2 feet, and a draught of 20.5 feet. The propulsion scheme is of COmbined Gas-And-Gas (COGAG) arrangement involving a collection of 4 x General Electric LM2500 gas turbines developing 100,000 horsepower to drive 2 x Shafts astern. This allows the ship to reach speeds in excess of 30 knots while reaching out to a range of 5,500 nautical miles (6,300 miles).©MilitaryFactory.com
Advertisements

Aboard is a crew of 300 and installed systems include the AN/SPY-1D(Y) multi-function radar suite, the AN/SPG-62 fire control radar, and the Sagem InfraRed Search and Track (IRST) system. Two sonar units are provided, the hull-mounted DSQS-21BZ-M and the towed SQR-220K array. The Electronics Warfare (EW) suite is the LIG Nex1 SLQ-200K series. ROKS Seoae Ryu Seong-ryong is equipped with the powerful American-developed "AEGIS" combat system offered by defense powerhouse Lockheed Martin.

The profile of the ship showcases a clean, sleek design appearance. The hull line runs unbroken from bow to stern. Aft of the deck gun is a VLS emplacement followed by the bridge superstructure. THe mastworks are partially exposed in the arrangement atop the bridge superstructure while the section leads to the low-profile, enclosed smoke funnels at midships. Directly amidships is a collection of missile launchers crossed over one another for optimal engagement angles. The aft smoke funnels are integrated as part of the aft superstructure component which then steps down to the hangar / helipad area of the stern. The helipad / hangar can support up to two navalized medium-lift helicopter types equipped for the Anti-Submarine Warfare (ASW) role.

As of this writing (2021), ROKS Seoae Ryu Seong-ryong maintains an active status in the RoKN fleet and would be called upon to answer any aggression from North Korea, China, or other belligerent regional player.©MilitaryFactory.com
Note: The above text is EXCLUSIVE to the site www.MilitaryFactory.com. It is the product of many hours of research and work made possible with the help of contributors, veterans, insiders, and topic specialists. If you happen upon this text anywhere else on the internet or in print, please let us know at MilitaryFactory AT gmail DOT com so that we may take appropriate action against the offender / offending site and continue to protect this original work.
Advertisements

ANTI-AIRCRAFT Onboard systems alert and protect the vessel from airborne, low-flying airborne threats through ballistic and / or missile weaponry.
OVER-THE-HORIZON An Over-the-Horizon operational capability is granted to the vessel, typically through launched fixed-wing / rotary-wing aircraft.
MISSILE ARMAMENT The vessel supports the launching of missiles against airborne, waterborne, or land-based targets at range; typical of modern designs.
TORPEDOES Ability to launch torpedoes against ocean-going targets.
ANTI-SUBMARINE ROCKETS Ability to launch salvo of rockets against submarine threats.

(Not all weapon types may be represented in the showcase above)
1 OR 2 x Medium-lift navy helicopter(s) launched/retrieved from stern helipad; supported through integrated hangar structure; typically AgustaWestland "Super Lynx" or Sikorksy SH-60 "Seahawk" types equipped for Anti-Submarine Warfare (ASW) sorties. 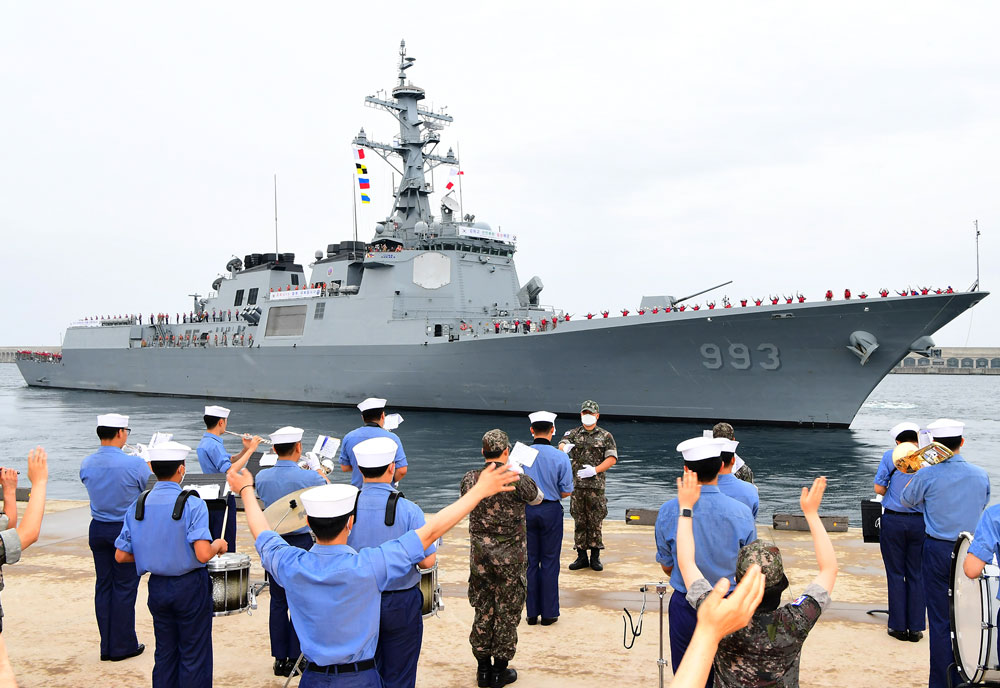 Image from the Republic of Korea Navy; Public Release.