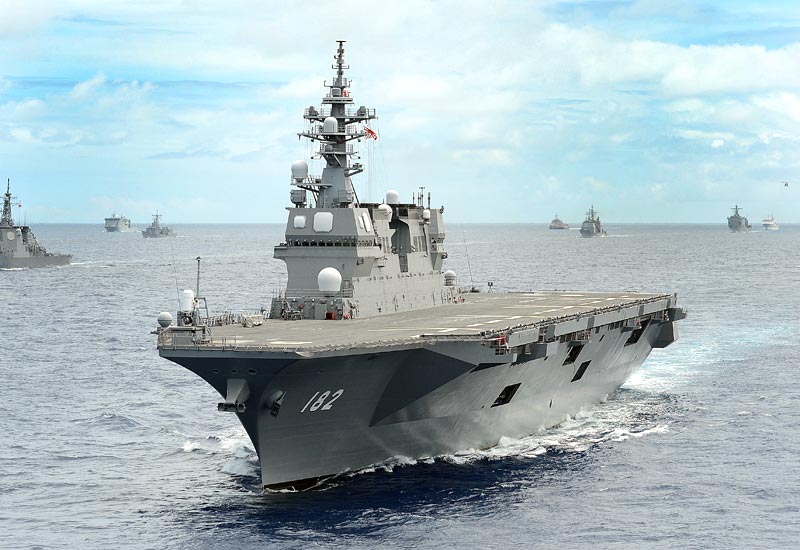 Image from the United States Department of Defense DVIDS network.
2 / 2 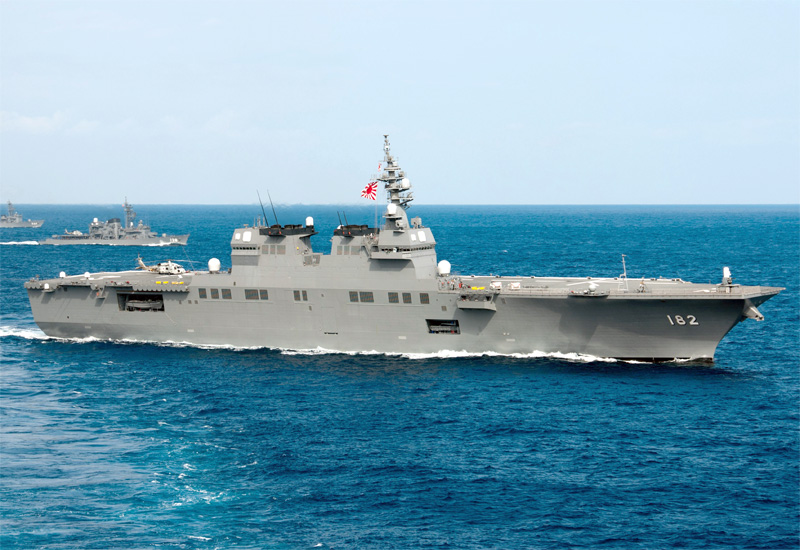 The JDS Ise DDH-182 is the second of two Hyuga-class helicopter destroyers in service with the modern Japanese Navy.

Authored By: Dan Alex | Last Edited: 08/08/2018 | Content ©www.MilitaryFactory.com; the following text is exclusive to this site.
The JDS Ise (DDH-182) serves as a "helicopter destroyer" within the Japanese Maritime Self-Defense Force (JMSDF) - otherwise recognized as the post-World War 2 Japanese Navy. As a helicopter destroyer, the craft exhibits the qualities of both a naval destroyer warship and a helicopter carrier and can, thusly, undertake various roles associated with the Japanese Navy. The JDS Ise forms the second ship of the two-strong "Hyuga-class" which is led by the JDS Hyruga (DDH-181). The Ise saw her keel laid down by IHI Marine United on May 30th, 2008 and she was officially launched on August 21st, 2009. The vessel was formally commissioned on March 16th, 2011 and makes her homeport out of Kure. She is named after the Japanese province of Ise ("Ise Province") located in the south-central portion of mainland Japan. The Ise fights under the motto of "Readiness, Expertness, Integrity".

As built, the Ise displaces at 14,000 tons under standard operating loads and can displace as much as 18,000 tons under full combat load. She features a bow-to-stern length of 587 feet, a beam of 108 feet and a draught of 23 feet. A typical crew complement is 370 personnel. Its physical characteristics include an inline flight deck which is designed to launch and retrieved only Vertical Take-Off and Landing (VTOL) aircraft, primarily navalized helicopters in service with the JMSDF - as such she is not a true "aircraft carrier" by Western standards. To complete this task, the bow, stern and portside sections of the flight deck are clear of obstructions, leaving only the island superstructure offset to starboard. The superstructure is also home to the main mast and a pair of low-profile, fully-enclosed smoke funnels for a reduced radar signature. The Ise typically fields 3 x Sikorsky SH-60K Seahawks and 1 x AgustaWestland AW101 Merlin medium-lift helicopters outfitted for the anti-submarine warfare (ASW) role though it is cleared to field as many as eleven rotary-wing units under full loads. The Ise features a fully-enclosed hangar facility accessed via flight deck hangar elevators.

In terms of armament, the JDS Ise is outfitted with a 16-cell bank of vertically-launched missiles in the Mk 41 VLS (Vertically Launching System). Such launchers have primarily overtaken the large array of deck guns once found on destroyer designs in prior ages. Additional missile armament also includes 16 x RIM-162 Evolved Sea Sparrow Missiles (ESSMs) which were introduced by the United States Navy in 2004 as an advanced medium-ranged, anti-aircraft measure. To counter undersea threats, the Ise is afforded use of 2 x 324mm triple-tube torpedo launchers. Close-in defense is handled by the digitally-controlled 2 x 20mm Phalanx Close-In Weapon Systems (CIWSs), one fitted to the bow and the other at the stern. Extreme short-range defense is then provided by up to 4 x 12.7mm heavy machine guns.
The propulsion system of the Ise is of the COGAG ("COmbined Gas And Gas") arrangement which basically implies a pairing of gas turbines feeding into separate reduction gearboxes which then lead to individual clutches. From there, the drives head into a singular gearbox which, in turn, drives a single propeller shaft system. Such an arrangement allows for multiple engine sources to power a single shaft - either both engines in play or a single unit in use to conserve fuel. The alternative to COGAG is CODAG ("COmbined Diesel And Gas") which mates a diesel engine with a gasoline turbine. However, COGAG systems are generally more compact (at the expense of overall fuel efficiency at optimal cruising speeds) when compared to the CODAG arrangement. In the case of the Ise, the COGAG feature is arranged through 4 x Ishikawajima Harima/General Electric LM2500-30 gas turbines developing 100,000 horsepower to drive its two, five-bladed shafts at maximum speeds over 30 knots.

The JMSDF primarily utilizes its JDS Ise as an anti-submarine platform which is in line with its available armament arrangement and aircraft wing. The vessel can therefore operate independently of the fleet or in conjunction with other vessels and aircraft in locating, tracking and hunting down a potential enemy threat. Its weaponry can also serve to counter incoming aerial enemies including low-flying fixed-wing aircraft, helicopters and cruise missiles. Their advanced, secured and ultra-modern communications suite also allows them to head any JMSDF fleet in a time of war or under exercise conditions. Should Japan continue its commitment to the American Lockheed F-35 Lightning II (in its Short Take-Off and Vertical Landing (STOVL) form (as the F-35B), it is presumed that the aircraft would operate from Japan's fleet of helicopter carriers such as the Ise, further broadening the tactical scope of the vessel. Another potential future adoption is the V-22 Osprey tilt-rotor transport.

(Not all weapon types may be represented in the showcase above)
Up to eleven navy helicopters of various types - transport, anti-submarine warfare (ASW), search and rescue (SAR).