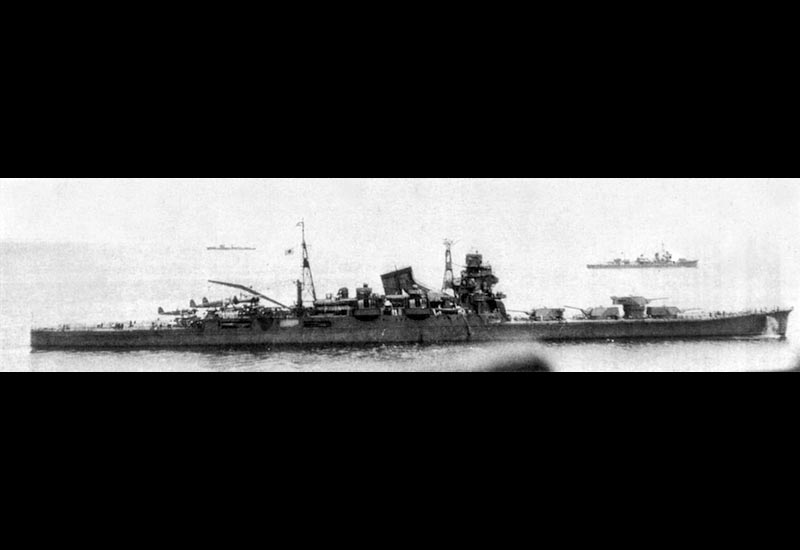 IJN Tone managed a service career spanning most of World War 2 - but she was sunk where she sat during July of 1945.

Authored By: Staff Writer | Last Edited: 05/30/2017 | Content ©www.MilitaryFactory.com | The following text is exclusive to this site.
IJN Tone of the Imperial Japanese Navy (IJN) of World War 2 (1939-1945) was the lead ship of the two-strong Tone-class of light cruiser warships (eventually reclassified to heavy). Her sister ship was IJN Chikuma and both saw combat service in the Second World War. The type was initially set to become part of the existing pre-war Mogami-class cruiser group which numbered four and were commissioned from 1935 into 1944. Instead, limitations realized with this class led to the development of a new limited-number ship group - the Tone-class. This class was an amalgam of design objectives as they were to be outfitted with 12" 155mm turreted main guns as in the Mogami-class while still attempting to adhere to the 8,000 tonnage restriction set forth by international naval treaties of the post-World War 1 world. Before the end of the pre-World War 2 phase, the Tone-class was reworked beyond these restrictions and evolved into a heavy-class cruiser warship design set to take on a main gun armament of 203mm as well as eight reconnaissance floatplane aircraft. In this way, the type was intended for service as a deep water "scout cruiser".

As finalized, she displaced 11,200 tons under standard load and just over 15,400 tons under full load - an obvious breach of naval treaties. The warship was given a running length of 620.4 feet with a beam of 63.7 feet and a draught down to 20.3 feet. Power was generated from 8 x oil-fired boiler units feeding 4 x Gihon geared steam turbines developing 152,000 horsepower to 4 x shafts under stern. Speeds reached 35 knots and range was out to 8,000 nautical miles in ideal conditions. The crew complement numbered between 850 and 875 men and armor protection ranged from 100mm at the belt to 65mm along the deck. The intended eight-strong air wing became five or six Aichi A13E floatplane aircraft in practical service. Two catapults were used for launching and an onboard crane for recovery.
The Tone's armament was led by 8 x 203mm /50 caliber Type 3s guns in four double-gunned turrets. The four turrets were required of the design as Japanese engineers had yet to develop a suitable triple-gunned turret like those common to American and British warships of the period. These guns were all installed in a forward position to relieve the rear of the vessel for its intended aircraft support facilities. Their clustered placement ensured a good, clustered placement of shells against a target in turn but the arrangement was cumbersome and space consuming. The main battery was supported by 8 x 127mm guns and local anti-aircraft services were provided for by 12 x 25mm AA gun installations. The vessel also carried 12 x 650mm (24") torpedo tubes to deal with surface threats at range.

With its origins in the Mogami-class design, the Tone-class mimicked some of the form and function of the earlier ships. Their weight was increased, which reduced their speed and range some, but the vessels shared roughly the same power and firepower. Armor protection was relatively similar as well but the Tone-class benefitted from Japan's turning away of the post-World War 1 naval treaties before her construction had ended (unlike the Mogami-class which were ruled by treaty limits to an extent). Her profile included an angled smoke stack at midships, a bridge superstructure ahead of a mast (and aft of the four primary turrets) and a second mast towering over the aft section of the warship.

IJN Tone was part of CruDiv 8 and joined the attack on Pearl Harbor on December 7th, 1941. Her planes were then used in the second invasion of Wake Island during December and several raids then followed in the Pacific Theater. Her next major commitment came in the Battle of the Java Sea and, from there, further raiding actions - this time in the Indian Ocean against British targets.

The Battle of Midway took place from June 4th until June 7th, 1942 and marked a critical juncture in the Pacific War as Japanese carriers attempted to subdue the American military presence on Midway Island. This involved committing no fewer than four IJN carriers to the task, along with a pair of battleships and lesser ships in tow. All four IJN carriers were sent to the bottom of the sea and the attack resulted in a decisive American victory - stunning Japanese warplanners. Tone continued as part of CruDiv 8 during the attack and left undamaged.

On August 24th, 1942, Tone took part in the Battle of the Eastern Solomons where she launched her reconnaissance floatplanes in support. This led to an attack on the American carrier USS Enterprise which resulted in the warship being bombed by IJN aircraft and severely damaged - but not destroyed. The Japanese lost the carrier Ryujo during the response thanks to aircraft from USS Saratoga. Again, IJN Tone left the battlefield in one piece.

IJN Tone took part in several actions during the Battle of Santa Cruz (October 25th- 27th, 1942) and participated in the Guadalcanal Campaign (August 1942 - February 1943). In February of 1943, her anti-aircraft capabilities were augmented by installation of more 25mm guns as well as Type 21 air search radar. Transport runs then greeted her when supporting the Marshall Islands Campaign before she returned to patrolling. In February of 1944, she was used to rescue Japanese forces from Truk and relocate them to Palau. In March of that year, she undertook more raiding actions in the Indian Ocean and claimed the British freighter SS Behar on March 9th.

During the Battle of the Philippine Sea (June 19th-20th, 1944), IJN Tone made up just one of the ninety Japanese warships facing off against 129 warships of the American Navy. Tone was part of Force C and was given additional 25mm AA guns for self-defense and fleet protection. Type 13 air search and Type 22 surface search radar fits were also added. The battle ended as yet another decisive American victory - three IJN fleet carriers were sunk and over 500 Japanese aircraft destroyed.

The Battle of Leyte Gulf (October 23rd-26th, 1944) marked the last notable wartime actions of IJN Tone. A stout American air presence ensured that the Japanese fleet headed in support of the Philippines Campaign were held in check and eventually driven off. Tone's sister, Chikuma, was hit by a aerial torpedo in the battle and scuttled by her owners on October 25th.

After repairs were enacted and receiving additional 25mm guns as well as updated radar, Tone was moored as a training platform at Etajima. It was here that she took some damage from an air raid o March 19th, 1945 but her end finally came in another air raid, this one on July 24th, 1945 when she was berthed at Kure. Tone was hit by three aerial bombs and sunk where she sat. On July 28th, she took even more damage from bombs and rockets which worsened her condition. The end of the war arrived in August of 1945 and on November 20th of that year, IJN Tone was struck from the Naval Register. Her sailing days now ended, she was raised and scrapped during 1947-1948.

(Not all weapon types may be represented in the showcase above)
Up to 8 x reconnaissance floatplane aircraft (Aichi A13E). 6 x Floatplanes operationally though five proving the service standard. By 1944 two or three were carried.