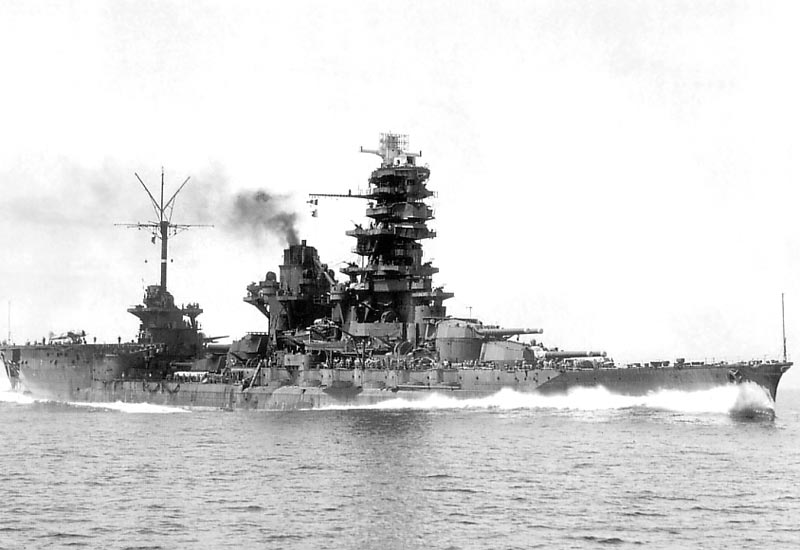 Ise in her post-1943 reconstruction guise; Image from the Public Domain.

IJN Ise was built during the World War 1 period, was rebuilt throughout the 1930s, and met her end in the fighting of World War 2 at the hands of the USN.

Authored By: Staff Writer | Last Edited: 08/08/2018 | Content ©www.MilitaryFactory.com | The following text is exclusive to this site.
During the 1910s, the Japanese Empire laid down what was to become its first true Dreadnought battleships that made up the "Fuso-class". These arrived in examples, IJN Fuso herself and sister-ship IJN Yamashiro. The pair was operated actively during World War 1 (1914-1918) and served into 1944 - the World War 2 period (1939-1945). Both were eventually lost to action.

From this beginning was furthered a new design at about the same pre-World War 1 time to follow the more successful qualities of the Fuso-class. This begat the Ise-class which were mainly modifications of the earlier warships that included the rearranging of the main 14" guns across six twin-gunned turrets as opposed to the Fuso's four triple-gunned arrangement. The rearrangement helped to spread the primary armament about the length of ship so as to avoid a single direct hit knocking out multiple primary gun stations as once. The secondary battery of 6" guns was replaced by a more useful collection 16 x 5.5" weapons, these in single-gunned mountings. To this armament suite was added 4 x 3" guns to serve in the Anti-Aircraft (AA) role and 6 x 21" Torpedo tubes to attack surface combatants at range.

The Ise-class was slightly better armored than the preceding Fuso-class by some 1,000 tons of protection. Armor ranged from 11.8" at the belt to 3.3" along the deck and 10" at the main turrets. Internally, 24 x new boilers promising better performance were installed, these feeding 2 x Steam turbines and outputting 45,000 horsepower to 4 x Shafts under stern. Speeds reached 23 knots and range was out to nearly 9,700 nautical miles.

Kawasaki of Kobe, Japan was charged with the construction of IJN Ise. She was ordered on April 11th, 1913 and saw her keel laid down on May 10th of that year. She was launched to sea for trials and evaluation on November 12th, 1916 and made her way into commissioning on December 15th, 1917. Her sister, IJN Hyuga, was constructed by Mitsubishi at Nagasaki and entered service a year later.

Dimensions of Ise reached 683 feet in length with a 94 foot beam and a draught of 29.3 feet. Displacement was 31,760 tons under standard load and 37,100 tons under full load. The crew complement was 1,198 personnel. In her original guise, the warship held a two-mast profile with a pair of smoke funnels featured at midships. The deck line ran unobstructed from bow to stern. Primary turrets were positioned with two forward, two amidships and two overlooking the stern.
During an overhaul period spanning from 1928 until 1929, IJN Ise had her superstructure expanded some and better support for aircraft was introduced. From 1931 until 1932, the warship was the focus of a greater modernization effort when her AA systems were completely replaced for the better. Again the superstructure was expanded and become more in line with the "pagoda-style" common to other IJN ships. Her aft-section was modified to allow the launching of up to three recoverable biplane seaplanes from the stern from a single catapult system. More extensive reconstruction then arrived in August of 1935 and this lasted until March of 1937 - adding more armor protection and better power output.

When war between the Japanese Empire and the United States broke out with the December 7th, 1941 assault on Pearl Harbor, Hawaii, IJN Ise was held in a reserve support role. Type 21 air-search radar was added in May of 1942 while the ship was undergoing repairs from an accident. Following the disastrous defeat at the Battle of Midway in 1942 against the Americans (in which several prized carriers were lost), the Ise-class was earmarked for conversion to "hybrid aircraft carriers" while retaining some of their Dreadnought battleship qualities. This involved the addition of a complete flight deck over the stern section as well as hangar support facilities which took over the place of the aft turrets. The air wing became twenty-two total aircraft which were all recoverable seaplane types (recovered by way of crane). The aircraft were to be launched by a single catapult system. The work was done before the end of 1943.

Despite their reconstruction, Ise and her sister never carried the air wing in an operational role and thusly never tested as hybrid carriers during the whole of the war. Instead, the pair were primarily reserved as decoy ships during the games of "Cat-and-Mouse" between the IJN and the United States Navy (USN) during the Pacific Campaign. This was the case during the Battle of Leyte Gulf in October of 1944 and Ise was able to use her guns in anger during the Battle of Cape Engano as part of the same campaign. However, owing to shortages of simple resources such as fuel, the pair were seldom used towards the end of the war and languished in port. USN warplanes then affected IJN Ise's wartime tenure when they attacked her where she berthed on July 28th, 1945 - Ise taking two bombs during an assault on Kure that involved some 240 USN warplanes. In a final bid of desperation, Ise was reinstated as a floating Anti-Aircraft (AA) battery positioned between Kure and Kurahashijima and suffered another attack on July 24th, 1945 when sixty USN planes arrived. Additional damage led her to sink where she berthed and subsequent salvage efforts proved fruitless. She lay there until the end of the war in August of 1945 and, in November of that year, she was struck from the Naval Register. Her scrapping took place from 1946 to 1947 bringing about her formal end.

(Not all weapon types may be represented in the showcase above)
As Built (1917):
3 x Floatplane aircraft (recoverable).

1945 Conversion to a hybrid battleship / aircraft carrier:
Up to 22 aircraft to be carried.