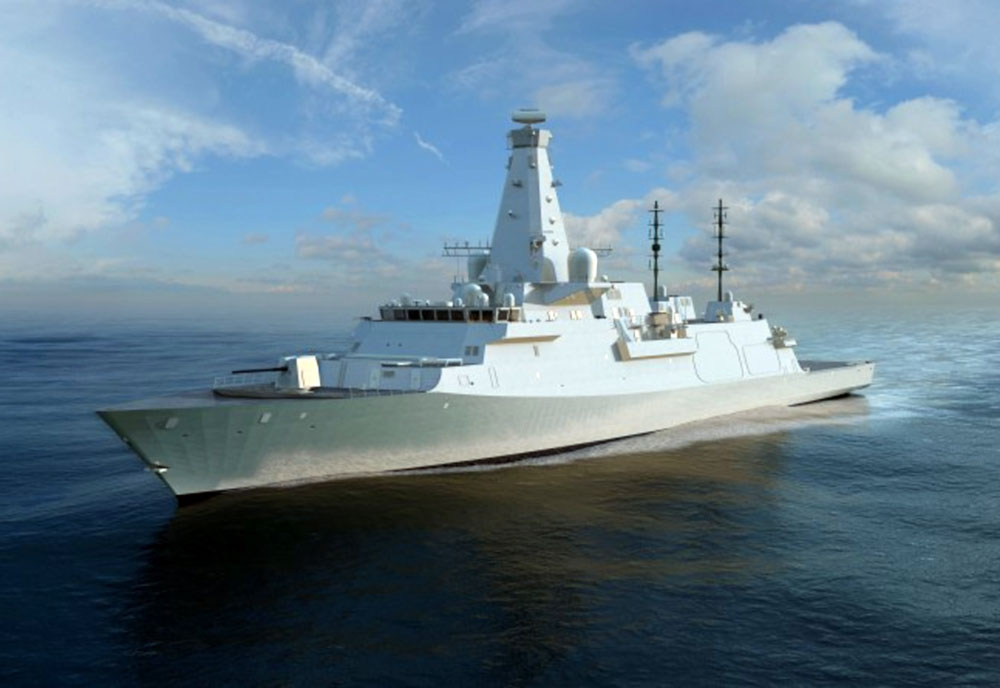 Image from the British Royal Navy; released to the public.

The upcoming Royal Australian Navy Hunter-class guided-missile frigates are based in the British Type 26 design - set to number nine units for the RAN.

Authored By: Staff Writer | Last Edited: 01/11/2019 | Content ©www.MilitaryFactory.com; the following text is exclusive to this site.
As the Royal Australian Navy (RAN) continues to cast an eye to the future for its surface fleet, the "Hunter-class" of fighting frigate has finally come into focus. The class is expected to number nine total units and succeed the aging Anzac-class post-Cold War-era group in same role (ten of these were built). The new Hunter-class ships are expected to enter service between 2025 and 2030. The Hunter-class initiative was born in 2009 in an attempt to modernize RAN surface capabilities to deal with more modern threats - namely those from submarines.

Three of the well-known shipbuilders in Europe were approached with the offer to design, develop, and construct the new ships: BAe Systems of the UK, Fincantieri of Italy, and Navantia of Spain. The contract was eventually awarded to BAe Systems with involvement set to come from Australian-based ASC Shipbuilding Pty Ltd. Construction is scheduled to start in 2020 and first-commissioning is slated for 2027.

The three first ships of the class are named HMAS Hunter, HMAS Flinders, and HMAS Tasman.

The Hunter-class is based in the newer "Type 26" guided-missile frigate design put forth by BAe Systems with changes enacted to suit local Royal Australian Navy requirements. The ship was developed as part of the British "Future Surface Combatant Program" and has since evolved to become the "Global Combat Ship". The Royal Navy reduced their commitment from thirteen of these ships to eight for budgetary reasons.

These warships are classed as "frigates", multi-purpose warships able to operate in "Blue Water" environments either independently or as part of a larger, integrated fighting force. As such, they can be made to carry a mixed armament load out and undertake various mission types including airspace deterrence, fleet support, and anti-submarine actions.

Key to the Hunter-class will be its missile-carrying capability and this involves banks of proven Vertical Launch Systems (VLSs) embedded into the surface of the hull fore and aft, housing potent surface-to-air or surface-to-surface missiles (land-attack cruise missiles). There will be 48-cell and 24-cell banks of the Mark 45 Mod 4 Dual-Purpose type on the ship along with the usual turreted 5" deck gun over the forecastle and a 20mm Gatling-style Close-In Weapon System (CIWS). Other traditional features include a full-service hangar facility and helipad at the stern (to support an MH-60 "Seahawk" or similar navalized medium-lift helicopter). Torpedoes will also figure into the mix as will an advanced submarine-hunting suite involving hull-mounted sonar, a towed array, and a variable sonar system.

Aboard is a crew of about 180 in peacetime and this can be increased to over 200 in war - the internal space also allowing the warship to serve in humanitarian roles as they arise.

Current published structural dimensions include a running length of 492 feet with a beam measuring 67 feet. Displacement will reach around 9,700 tons under full loads. The structure will take on the usual "stealth" approach common to modern fighting ships: slab hull sides, limited surface obstructions/protrusions, an enclosed main mast, and low-profile smoke funnels. To this will be added survivability features in the form of electronic and physical countermeasures. The American "AEGIS" system figures into the mix.

The propulsion scheme will center on a COmbined Diesel-eLectric Or Gas (CODLOG) arrangement involving systems similar to a CODOG scheme but encompass electric motors, diesel generators, and gas turbines. This arrangement is intended to reduce operating and servicing costs and generation maintenance. Estimated performance specs include a top speed over 27 knots and a range out to 8,100 miles.

(Not all weapon types may be represented in the showcase above)
1 x Sikorsky MH-60 Seahawk Anti-Submarine Warfare (ASW) helicopter or similar. Full-service hangar facilities and helipad over stern section.