HTM Bhumibol Adulyadej FFG-471 was formally commissioned into service with the Royal Thai Navy in January of 2019.

Authored By: Staff Writer | Last Edited: 09/23/2020 | Content ©www.MilitaryFactory.com | The following text is exclusive to this site.

HTMS Bhumibol Adulyadej (FFG-471) is a stealth-centric fighting frigate of the modern Royal Thai Navy. The vessel was constructed by Daewoo Shipbuilding & Marine Engineering of Busan, South Korea and saw her keel laid down on May 15th, 2016. Launched on January 23rd, 2017, the warship was formally commissioned on January 7th, 2019. She maintains an active presence in the Royal Thai fleet as of this writing (2020).

The ship is the lead-ship of the Bhumibol Adulyadej-class which currently includes just Bhumibol Adulyadej herself and is part of the "High-Performance Frigate Boat Project" initiative pushed by the Royal Thai Navy for modernization of its fleet capabilities. Its design is based largely in the existing, proven Gwanggaeto the Great-class destroyers of the South Korean Navy though with reduced dimensions to better follow frigate conventions - and maintain a smaller, more stealth-like profile.

The Thai ship displaces 3,700 tons under full load and has a running length of 124.1 meters with a beam measuring 14.4 meters and a draught down to 8 meters. This gives the warship the capability to operate relatively close-to-shore while also maintaining qualities that allow for Blue Water operation.

Power is from a combination diesel-gas arrangement which sees 2 x MTU 16V1163 M94 marine diesels of 8,000 horsepower output installed alongside 1 x General Electric LM2500 gas turbines of 29,000 horsepower. The ship can, therefore, more efficiently call upon either installation to accomplish general cruising or high-speed dashing tasks as needed. Maximum speed in ideal conditions reaches 33.3 knots and endurance is out to a useful 4,000 nautical miles.

Aboard is a complement of 141 officers and sailors.

HTMS Bhumibol Adulyadej is given a most-modern design appearance relying primarily on sloping, slab sides with limited protrusions. This includes a largely plain forecastle seating just the turreted deck gun and missile bay directly aft. Aft of this is the low-profile bridge superstructure which contains an enclosed, pyramid-style main mast seating all manner of sensors, communications, and processing systems. The smoke funnels are full-enclosed and of a low-profile design, integrated into the hull superstructure near midships. At the aft-section of the hull is a combination hangar-helipad which supports up to 2 x medium-lift helicopters - the role currently fulfilled by the Sikorsky S-70B "Seahawk" or Sikorsky MH-60S "Knight Hawk" types

While largely unproven, HTMS Bhumibol Adulyadej is undoubtedly an impressive addition to the Royal Thai Navy ranks at a time when regional stability is of the utmost importance.

(Not all weapon types may be represented in the showcase above)
1 OR 2 x Sikorsky SH-70 "Sea Hawk" or similar navy helicopter supported through stern-based hangar/helipad facilities. 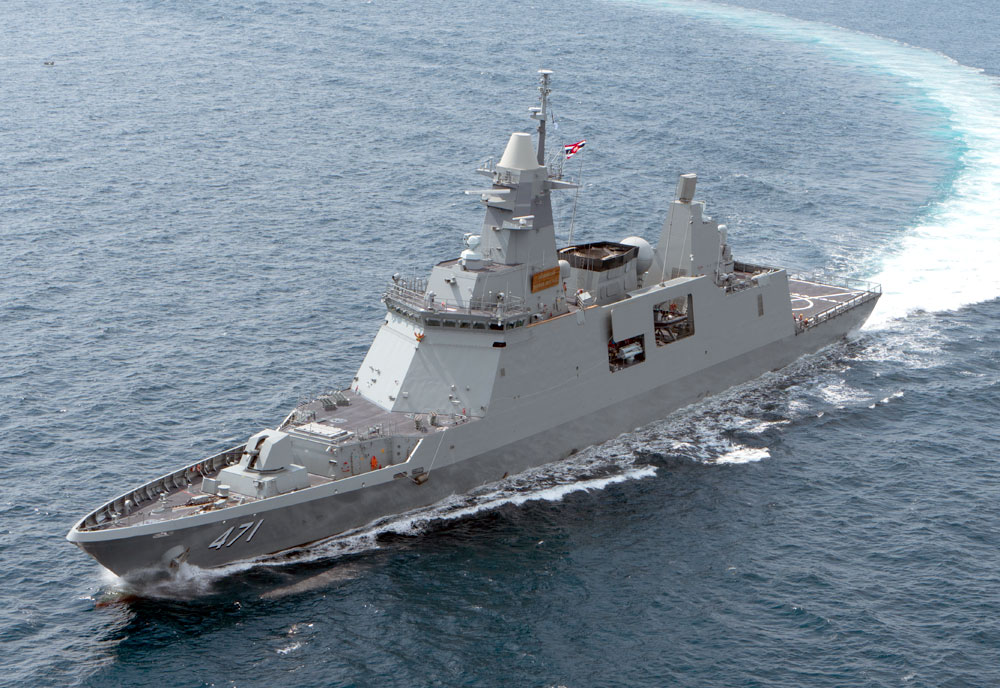