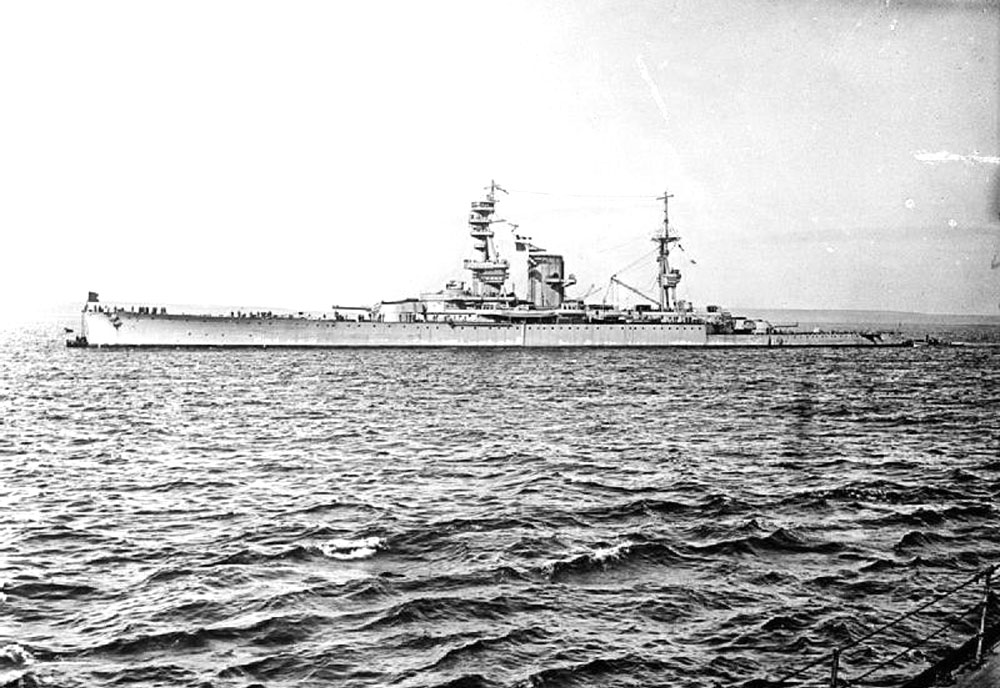 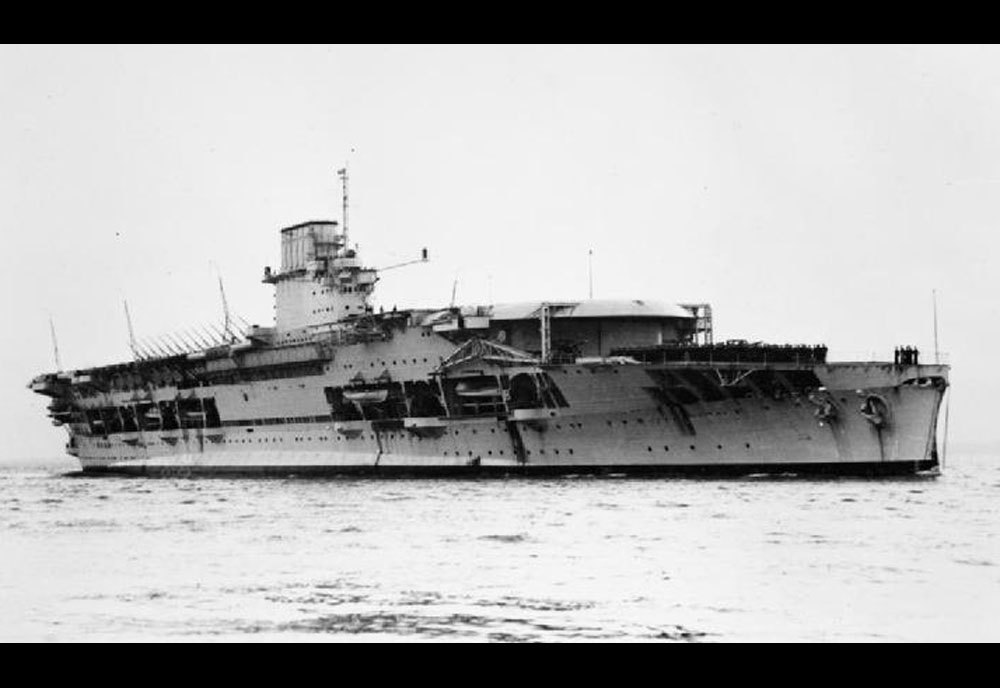 HMS Courageous began life as a light battlecruiser for WW1 and was converted to an aircraft carrier before WW2 - she was sunk by U-29 in September 1939.

Authored By: Staff Writer | Last Edited: 03/30/2020 | Content ©www.MilitaryFactory.com; the following text is exclusive to this site.
HMS Courageous (50) served two distinct lives for the British Royal Navy during her ocean-going tenure. She began as a light battlecruiser and fought throughout World War 1 (1914-1918). In the mid-to-late 1920s, she was selected for conversion into an aircraft carrier and, while retaining her name, she took on an all-new function. She served into World War 2 (1939-1945) but was lost to a German submarine attack in during the first month of the war.

While its roots were laid down considerably earlier, World War 1 began in the summer of 1914 with the first shots fired that August. With the need for more modern surface combatants, the Royal Navy ordered a new warship class - the Courageous-class - on March 14th, 1915 to strengthen its ranks of light battlecruisers and better match German naval strength.

The Courageous-class consisted of three warships led by HMS Courageous (50) and joined by sisters HMS Glorious and HMS Furious (the latter as part of the "Furious" subgroup). All three would eventually be converted to aircraft carriers before the end of their service lives.

HMS Courageous was built by Armstrong Whitworth at Yard No. 895 and saw her keel laid down on March 26th, 1915 as the war continued to ramp up. She was launched on February 5th, 1916 and formally completed for service on November 4th, 1916. Her hull number was "50".

As a light battlecruiser, the warship was charged with several tasks, namely hunting and scouting in deep seas. Because of British wartime shipbuilding restrictions, an improved form of the Renown-class battlecruiser could not be had so a reduced-armor form was used instead, giving rise to the Courageous-class. This group retained the firepower of a true battlecruiser at the expense light armor protection to maintain needed performance in deep sea work.

As built, Courageous was given a standard displacement of 19,500 tons under normal load and 23,000 tons under full load. Overall length reached 786.8 feet and the beam measured 81 feet while the draught was down to 25.9 feet. Installed power became 18 x Yarrow small-tube boilers deeding 4 x Geared steam turbines developing 90,000 horsepower to 4 x shafts under stern. This gave the vessel a top ocean-going speed of around 32 knots with a range of 6,000 nautical miles when traveling at a controlled 20 knots in ideal conditions.

The ship's crew totaled 842 officers and sailors. Armor protection reached up to 3" at the belt, 3" at the deck, 7" at the barbettes, 9" at the main turrets, and 10" at the conning tower.

Armament constituted 4 x 15" Mark I main guns set in two twin-gunned turrets with one positioned fore and the other aft. This was backed by 18 x 4" Mark IX guns in six triple-gunned mountings and 2 x 3" guns used for air defense. Like other warships of the period, HMS Courageous was outfitted with 2 x 21" (533mm) torpedo tubes as an added counter to surface threats at range.

In this form, the vessel struck out to sea but took on damage while still in trials which delayed her formal entry into World War 1. She then became flagship of 1st Cruiser Squadron before the end of 1916 and took on mine-laying duties in April of 1917 (after being properly equipped for the role). Additional torpedo tubes were added in 1917. In October of that year, she missed out on engaging a German raiding party in the North Sea that sunk a convoy en route to Norway.
HMS Courageous was present at the Second Battle of Heligoland Bight fought between the British and German navies on November 17th, 1917. The battle proved indecisive for both sides with the British receiving damage to a single light cruiser while the Germans had one damaged light cruiser and lost a minesweeper. She ended the war on patrols across the North Sea and, in 1918, added gear to launch Sopwith biplane fighters. On February 1st, 1919, with the war over by way of the Armistice of November 1918, she was set in reserve.

During the ensuing Interwar period, and the rise of the aircraft carrier as a prominent piece in naval warfare, HMS Courageous proved a perfect candidate for conversion to such a type. From the period spanning 1925-1928, she was completely reworked for her second life as the Royal Navy continued to operate under the restrictions of the 1922 Washington Naval Treaty. The ship's profile changed to include an starboard-set island superstructure and smoke funnel with a two-piece, straight-through flight deck replacing the main gun turrets and hull superstructure of old. Over the forecastle was had a short-length "fly-off" deck while a longer deck was positioned over the mass of the ship covering the hull from ahead of midships to just short of the stern's extreme edge. Hangar facilities constituted two full levels within and a total of forty-eight combat aircraft could be carried into action.

Her original hull shape could still be made out under all of the new work and her performance more or less remained intact. The crew complement now involved 814 total men as well as 403 additional personnel dedicated to the air arm. Speed was only slightly reduced to 30 knots and range was 5,860 nautical miles under steam at 16 knots. Armament was strictly for air defense duties, made up of 16 x 4/7" (120mm) Mark VIII Anti-Aircraft (AA) guns in single-gunned mountings about the hull structure.

The work on Courageous ended in February of 1928 and the vessel undertook a period of trials and training. She was first assigned to Mediterranean waters and gained upgrades throughout the 1930s. At the start of World War 2 on September 1st, 1939, she was assigned to the British Home Fleet and operated Fairey Swordfish biplane torpedo bombers.

On September 17th, 1939, HMS Courageous was hunted by the German U-boat U-29. As the carrier turned to launch its aircraft into the wind (and present a juicy target to the German commander), U-29 seized the opportunity and launched three torpedoes into the side of Courageous. Two of the trio hit their mark which cut electrical power to critical systems. In just twenty minutes, the carrier went under with 519 of her crew. In this action, HMS Courageous became the first British warship to be lost to the Germans in the war.

(Not all weapon types may be represented in the showcase above)
After conversion to Aircraft Carrier: