HMAS Brisbane is the second of three guided-missile destroyers belonging to the Hobart-class of the RAN - it was commissioned in 2018.

Authored By: Staff Writer | Last Edited: 10/26/2021 | Content ©www.MilitaryFactory.com | The following text is exclusive to this site. 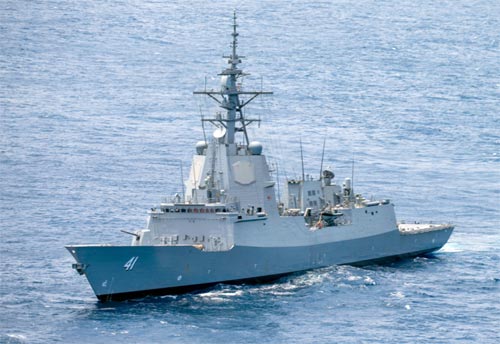 HMAS Brisbane (DDG-41) is the second of three guided-missile destroyer warships commissioned by the Royal Australian Navy (RAN) for the Hobart-class. Led by sister-ship HMAS Hobart (DDG-39) herself, the class plays an important role in surface warfare operations for the service. Brisbane was ordered on October 4th, 2007 and began construction on February 3rd, 2014. Its design was through Navantia of Spain while construction was headed by ASC, Forgacs Group (Forgacs Marine & Defence), and Bae Systems.

The warship was launched on December 15th, 2016 and formally commissioned into service on October 27th, 2018. Today (2021), she homeports out of Fleet Base East (Sydney) and fights under the motto of "We Aim at Higher Things". She is known as "The Steel Cat" and has taken on three existing Battle Stars by name for prior service in the RAN.

The vessel is built to the Hobart-class standard and thus displaces 7,700 tons under full load and showcase a running length of 482.10 feet, a beam of 61 feet, and a draught of 17 feet. Power is through a COmbined Diesel-Or-Gas (CODOG) arrangement which encompasses 2 x General Electric Marine 7LM2500-SA-MLG38 gas turbines of 23,500 horsepower each with 2 x Caterpillar 3616 diesel engines of 7,580 horsepower each. This drives power to 2 x Shafts under stern, these assemblies being of controllable pitch for more precise handling. All told, the warship can make headway in ideal conditions at over 28 knots and range out to 5,800 miles.

Aboard is a complement of 202 personnel which includes an air arm of sixteen to manage the function of a Sikorsky MH-60R "Seahawk" helicopter launched and retrieved from the stern. The helicopter can provide Anti-Submarine Warfare (ASW) protection as well as undertake Search & Rescue (SAR) and general ferry duties as needed.

After being commissioned in 2018, the warship undertook its weapons trials in 2019 including time spend in American waters off the coast of California. Beyond this, the warship has been undertaking general patrolling and exercise duties for its time at sea and has yet to have its baptism of fire.©MilitaryFactory.com
Note: The above text is EXCLUSIVE to the site www.MilitaryFactory.com. It is the product of many hours of research and work made possible with the help of contributors, veterans, insiders, and topic specialists. If you happen upon this text anywhere else on the internet or in print, please let us know at MilitaryFactory AT gmail DOT com so that we may take appropriate action against the offender / offending site and continue to protect this original work.

October 2021 - A helicopter launched from the flight deck of HMAS Brisbane crashed soon after take-off in the Philippine Sea. All crew survived.

ANTI-AIRCRAFT Onboard systems alert and protect the vessel from airborne, low-flying airborne threats through ballistic and / or missile weaponry.
OVER-THE-HORIZON An Over-the-Horizon operational capability is granted to the vessel, typically through launched fixed-wing / rotary-wing aircraft.
MISSILE ARMAMENT The vessel supports the launching of missiles against airborne, waterborne, or land-based targets at range; typical of modern designs.
TORPEDOES Ability to launch torpedoes against ocean-going targets.

(Not all weapon types may be represented in the showcase above)
1 x Sikorsky MH-60R Seahawk navy helicopter outfitted for the Anti-Submarine Warfare (ASW) role. 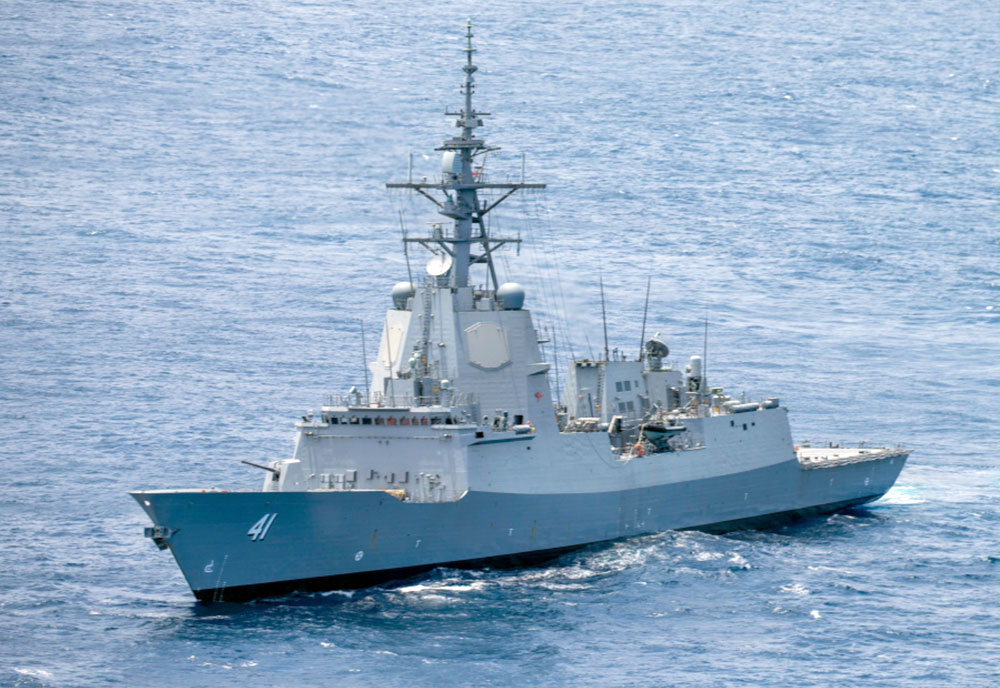