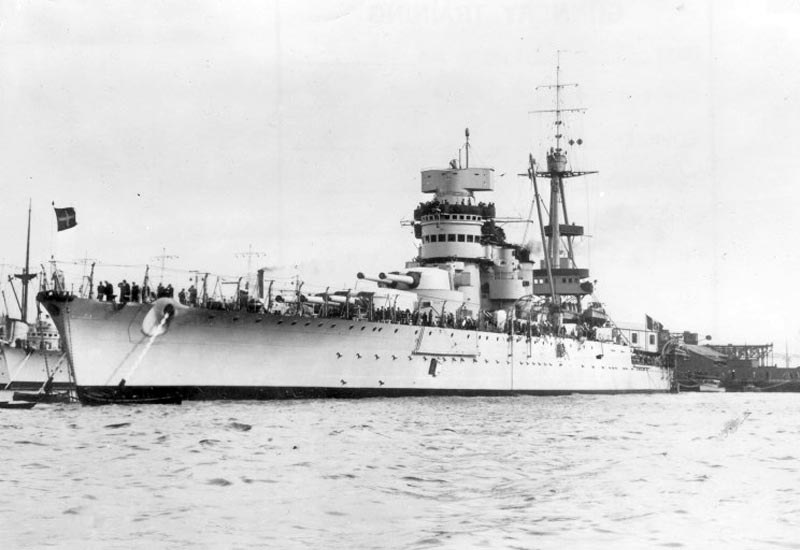 Giulio Cesare became a veteran of both World War 1 and World War 2 - though eventually handed over to the Soviet Navy following the latter as a war reparation.

Authored By: Staff Writer | Last Edited: 11/11/2020 | Content ©www.MilitaryFactory.com; the following text is exclusive to this site.
Giulio Cesare ("Julius Caeser") was one of three Dreadnought warships constructed by Italy for the Italian Navy to the Conte di Cavour-class standard. Sisters included Conte di Cavour herself and Leonardo da Vinci. The class was built in the pre-World War 1 (1914-1918) period and all managed to see action into World War 2 (1939-1945). Giulio Cesare, the focus of this article, was laid down by the builders of Gio. Ansaldo & C. of Genoa on June 24th, 1910 and launched on October 15th, 1911. She was formally commissioned into service on June 7th, 1914 - while this placed her in a position to participate in the various naval engagements of the World War 1 period, she did not see combat in the conflict.

As built, the warship displaced 23,500 tons under standard load and up to 25,500 tons under full load. Dimensions included a running length of 577.4 feet, a beam of 91.9 feet, and a draught down to 30.5 feet. Installed power consisted of 24 x Babcock & Wilcox boilers feeding 4 x Steam turbines driving 4 x Shafts under stern. The vessel could make headway at 21.5 knots in ideal conditions and ranged out to 4,800 nautical miles.

Aboard was a crew complement of about 1,000 including thirty-one officer-level personnel. Armor protection reached 9.8" at the waterline with 1.6 inches at the deck, 9.1" at the gun turrets, and 11" at the conning tower. Her original configuration saw five primary turrets set about her deck - two forward, two rear and one at midships. The midships mounting was straddled by a fore and aft smoke funnel. The bridge superstructure was integrated into the design aft of the second forward main turret. Two slim masts were positioned just inside of the two smoke funnels at midships.

Giulio Cesare did not see direct combat with the enemy in all of the fighting of World War 1. In 1923, she took part in supporting the Italian position during the Corfu Incident which pitted Italy versus Greece following the murder of an Italian general on Greek soil (an agreement, arbitrated by the League of Nations, was eventually signed).

Between 1933 and 1937 (the pre-World War 2 period), Giulio Cesare was rebuilt to keep her a viable naval asset to the Italian Navy service. Changes included major revisions to her propulsion scheme: the 24 boiler units were replaced by just 8 x Yarrow boilers and these now fed 2 x Geared steam turbines driving 2 x Shafts under stern. In turn, the warship's top speed increase to 27 knots and range out to 6,400 nautical miles. Her crew complement also increased to 1,260 personnel. Armament now became 10 x 320mm (12.6") main guns in two triple-gunned turrets and two twin-gunned turrets, 6 x 120mm guns in twin-gunned emplacements, and 4 x 100mm (4") /47 caliber Anti-Aircraft (AA) guns in twin-gunned mountings. Armor at the deck reached 6.5" in thickness and the barbettes carried up to 11" of protection.

The resulting ship was faster, ranged out farther, carried higher-power guns, and more armor than before. The work rewrote her profile silhouette, chief changes noted at midships where the central turret was deleted and the new smoke funnels installed. The mast works were also redrawn with the forward one minimized and the aft one now supported away from the aft smoke funnel.
World War 2

Her most notable actions took place during the Second World War and, more specifically, during the Battle of Calabria on July 9th, 1940. This indecisive engagement saw the Italian Navy take the stage against elements of the British and Australian navies during the Mediterranean Campaign. HMS Warspite managed a hit on Giulio Cesare causing fire and smoke near the rear smoke funnel. With reduced speed, the warship and its accompanying fleet pulled away to safety - as did the Allied fleet. After repairs before the end of August 1940, she was stationed in the Mediterranean in an effort to support Axis convoys and, in turn, stop Allied ones.

Giulio Cesare was one of the vessels present in Taranto harbor during the British surprise air raid on November 11th, 1940. Sister ship Conte di Cavour was sunk by torpedo where she lay but Giulio Cesare managed to survive the attack unscathed. The Battle of Cape Spartivento followed on November 27th, 1940 but the warship recorded little during the fracas. British bombers then delivered light damage to her in January of 1941.

The First Battle of Sirte took place on December 17th, 1941 at the Gulf of Sidra in the Mediterranean and ended another inconclusive naval battle of the theater. Again Italian forces were pitted against British and Australian units this time joined by Dutch elements. Two allied destroyer were slightly damaged (with one sailor killed) in the limited fighting.

Into early 1942, Giulio Cesare was returned to Taranto and made a training platform for the foreseeable future. The Italian surrender to the Allies in September of 1943 made her a target to the Germans, who proceeded to attack the vessel (unsuccessfully) in March of 1944. She remained in Taranto waters throughout the rest of the war and several years thereafter - her fighting days in Italian service no officially over.

In the post-war period, she was given to the Soviet Navy as reparations on February 6th, 1949 after which she was christened "Novorossiysk". She was, again, used as a training platform - this time for a new generation of Soviet seamen - and modernized with local systems and weapons as time and funds allowed. On October 28th, 1955, an explosion (perhaps from a German wartime naval mine) caused her to sink while berthed in Sevastopol, taking 608 souls with her.

The warship was officially struck from the Naval Register on February 24th, 1956. Once raised, she was stripped of her military value and sold for scrapping in 1957.