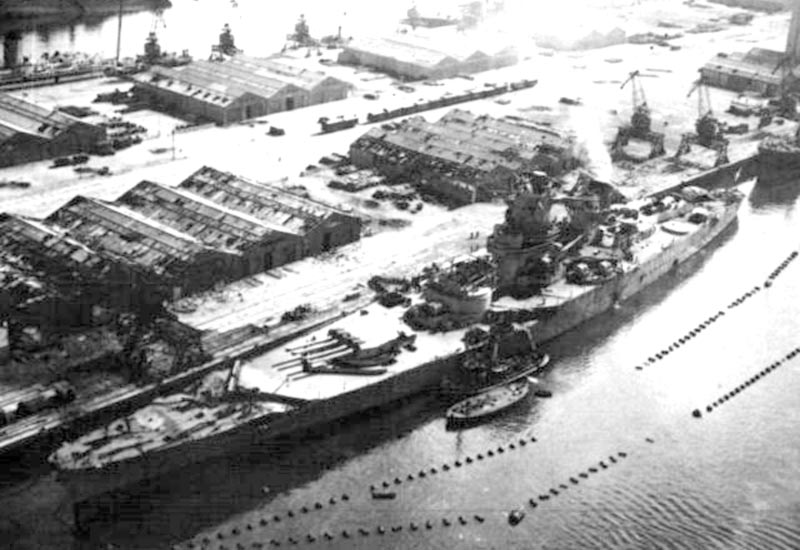 The French warship Jean Bart followed Richelieu into service but lay unfinished by the time of the German invasion of 1940.

Authored By: Staff Writer | Last Edited: 11/09/2018 | Content ©www.MilitaryFactory.com; the following text is exclusive to this site.
FS Jean Bart made up the second of the two-strong class of battleships known as the Richelieu-class. The group was accordingly led by Richelieu herself who became a veteran of the fighting of World War 2 (1939-1945). Jean Bart was laid down during the lead-up to World War 2 and launched during the early phase of hostilities, remaining incomplete during the pivotal Battle for France in 1940. She was not commissioned until after the war in 1949 and managed an active service life that ran until 1970.

FS Jean Bart was named after the French naval officer and privateer Jean Bart (1650-1702), a veteran of the Nine Years' War as well as the Battle of Dogger Bank (1696).

The birth of the Jean Bart was in a French Navy response to new Italian warships that threatened French power on Mediterranean. This led to the investment of the Richelieu-class which were more or less evolved from the existing two-strong Dunkerque-class appearing during the early part of the 1930s. Like these earlier ships, the Richelieu-class carried a unique main battery of 8 x 330mm guns fitted as four guns to two turrets - these turrets were all fitted forward as opposed to a balanced approach seeing the guns fore and aft. The new class was authorized by the French government in 1935 as 35,000-ton vessels and Jean Bart saw her keel laid down in December of 1936.

Beyond their unique main armament fit, the two new vessels were dimensionally larger, heavier and better-armed than their predecessors. The smoke funnel had a distinctive rearward-canted shapeand located aft of midships. With the two primary turrets well-spaced ahead on the forecastle, the bridge superstructure was set some distance aft and found closer to amidships than normal. This organization also brought the two main masts closer together. Propulsion machinery included six Indret Sural boilers feeding 4 x Parsons turbines and developing 150,000 horsepower while driving 2 x shafts. Performance included speeds of 32 knots and an endurance out to 7,670 nautical miles. Designed for operations in the Mediterranean (to directly counter the presence of the Italian Fleet), the ship held modest range but this proved acceptable considering the distances in the Mediterranean to be covered by the ship.

Dimensions were a length of 248 meters with a beam of 35 meters and a draught of 9.5 meters. Displacement was 35,000 tons under standard load and up to 49,000 tons under full load. A typical crew complement numbered 911 though this numbered ballooned up to 1,280 personnel during wartime. Armor protection measured 330mm at the belt, up to 170mm along the upper deck and up to 40mm along the lower deck. Heavier armoring was a key consideration of the new design when compared to the lighter Dunkerque-class.

Beyond its main battery of 8 x 380mm (14.96") main guns, Jean Bart carried 9 x 152mm (6") Anti-Aircraft (AA) guns as three three-gunned turrets. 90mm and 37mm guns were used for close-in air defense as were 4 x 13.2mm heavy machine guns.
With the German invasion of Poland in September of 1939, France and Britain entered the war as Allies. Jean Bart was formally launched on March 6th, 1940 while things turned for the worse May of 1940 as France itself was invaded while Jean Bart lay incomplete. The French surrender came in June while Richelieu and her sister fell under the control of Vichy French rule. Jean Bart was sailed from Saint-Nazaire to Casablanca - still in an unfinished state.

Once at Casablanca, some of her AA guns were taken to reinforce the Casablanca air defense network. In 1941, she was finally outfitted with gunnery equipment and navigational aids and during April of 1942, 4 x 37mm canons following on her design. Additional gun support came in June. In October, radar functionality was finally fitted and more guns added in November.

"Operation Torch" began the Allied landings in North Africa and this took place from November 8th until November 16th, 1942. A contingent of Free French forces made up the commitment that included the United States, Britain, Canada, Australia, and the Netherlands. Jean Bart lay under the control of Vichy French forces during this time which meant that her guns were used against French brothers as well as Allies though only one of her giant turrets was actually functional. Dive bombers responded from USS Ranger and the guns of USS Massachusetts were also brought to bear on the French warship, disabling Jean Bart's lone main turret.

After quick repairs during the landings, Jean Bart's guns were back in action and dive bombers from USS Ranger once again called to strike at the ship. This assault delivered considerably more damage to the warship - enough to sink her in shallow water but take her out of the fight nonetheless. With Allied containment of the beachhead and progress inland to follow, the battleship was ultimately taken over by the Allies. Her main guns were stripped and reused in Richelieu to replace her old fittings.

It was intended that the vessel should be relocated to the skilled shipbuilders of the United States for completion which would have included increased armament and added support for limited aircraft launching. However, this initiative fell through and the vessel spent her wartime period in Casablanca. It was only after the cessation of hostilities in 1945 that she went on to be finished.

Initially, authorities had decided to scrap the ship rather than commit the finances to completing her. Then there was a push to finish her off as a converted aircraft carrier but ultimately it became a matter of cost and material - the vessel would be completed as originally intended, a battleship. The war had also made the aircraft carrier the undisputed king of the seas which played against the need for a steel, big-gunned capital ship from a bygone era.

During August of 1945, Jean Bart was sailed from Casablanca to the French West Coast to begin her work. One of her more notable changes was in the aircraft protection scheme as the original 40mm Bofors and 20mm Oerlikon guns being substituted for 24 x 100mm guns and 28 x 57mm guns. Finally readied, she was officially commissioned into French Navy service on January 16th, 1949 and began her sailing career on May 1st, 1955. Her first few journeys were goodwill tours to various friendly nations. Her first real actions were during the "Suez Crisis" of 1956 where she was used to support the coalition involving French, British and Israeli forces against Egypt.

After this, Jean Bart was placed in reserve status from August 1st, 1957 on though she served as a gunnery training platform for a time. Efforts to convert her to a more useful platform failed and she was decommissioned during 1968 and sold for scrapping in 1970, bringing an end to her relatively short ocean-going career.