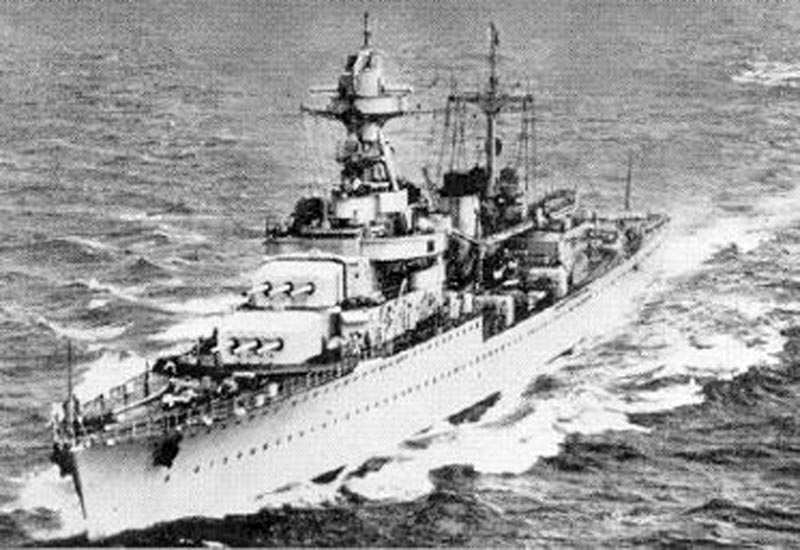 The French light cruiser Georges Leygues was a pre-World War 2 design and saw service throughout the conflict and into the Cold War decades.

Authored By: Staff Writer | Last Edited: 11/09/2018 | Content ©www.MilitaryFactory.com; the following text is exclusive to this site.
Georges Leygues served the French Navy prior to, and during, World War 2 (1939-1945) and managed an active service record in the years following the grand conflict. Based on tonnage and armament, she was classified a light cruiser and formed a portion of the La Galissonniere-class of surface ships, a six-strong group laid down during the 1930s. These vessels were fast, deep water warships with reasonable firepower that included three main turrets, a collection of anti-aircraft guns for local defense, and torpedo tubes enabling the class to engage surface, as well as aerial, threats as required. Georges Leygues was born during the military build-up preceding World War 2 and a product of the period that followed World War 1 (1914-1918). After the Great War, the French Navy was saddled with a collection of aging light cruiser types, including several gained as war reparations from both Germany and Austria-Hungary, and because of the limitations placed on naval powers in regards to heavy cruiser construction, the rebuilding French Navy was forced to continue the light cruiser trend and several classes emerged as a result.

Laid down on September 21st, 1933 by shipbuilder At & Ch de St. Nazaire-Penhoet of St. Nazaire, France, Georges Leygues was launched on March 24th, 1936 and formally commissioned on November 15th, 1937. She carried the namesake of Georges Leygues (1857-1933), a French politician who served for a time as the French Minister of Marine.

The warship Georges Leygues was given a largely conventional side profile as cruisers go - featuring a pair of smoke funnels at center and these protrusions flanked by a fore and aft superstructure. The bridge and communications systems were contained in the forward structure which, itself, sat aft of the two forward main gun turrets. The third main gun installation was installed well aft and fitted with an overhead floatplane launching catapult. A crane found at the stern allowed recovery of any aircraft launched - these aircraft landing in nearby water and awaiting pick-up. The onboard aircraft facilities allowed the vessel to support up to four Goudou-Leseurre GL-832 HY reconnaissance floatplanes or, later, up to two Loire 130 series flying boats. These aircraft provided a much-needed "eye-in-the-sky" quality for the ship crew, aiding in general naval tactics as well as gunnery accuracy at range. Her full crew complement numbered 540 persons made up of officers and sailors and armor protection included up to 105mm thickness at the main belt, 120mm along her sides, 100mm at the primary turrets, and as much as 95mm at her tower.

Georges Leygues displaced at 7,600 tons under standard load and up to 9,120 tons under full load. She measured a length of 587 feet with a beam of 57 feet with a draught down to 17.5 feet. Her machinery included four Indret boilers tied to a pair of single reduction geared turbines outputting 84,000 horsepower to twin shafts held under stern. The vessel could make headway at up to 31 knots in ideal conditions and ranged out to 7,000 nautical miles - giving her a fairly good reach.

Her primary battery consisted of 9 x 152mm (6") /54.3 caliber main guns set across three turrets, these fitting three cannons apiece. Two of the primary turrets were fitted forward and a single emplacement was found aft. The guns held a listed range out to 23,000 yards and could serve in the engagement of both surface threats as well as inland targets. Aircraft defense was through 8 x 90mm (3.5") /50 caliber guns set in four double-barreled turrets, two of which lay to either side of the central superstructure area for maximum coverage. These could ranged out to 13,000 yards. Additional firepower for dealing with surface threats came from 4 x 550mm (21.7") torpedo tubes, a single twin-tube launcher fitted to either side amidships.
France declared war against Germany on September 3rd, 1939 following the German invasion of Poland. Her first actions involved Atlantic patrols to hunt German raiders but the vessel only managed to accidentally assail another French warship - the submarine "Casablanca" - during this period. Because of the threat posed by the powerful Italian Fleet in the Mediterranean, it was decided to relocate Georges Leygues and other French naval assets to Mers-el-Kebir i (Algeria) during April of 1940. France fell to the German invasion in June of 1940 after a month-and-a-half-long campaign.

In July, the British Navy attempted to destroy the French Fleet at Mers-el-Kebir for fear of these warships eventually being used against them. The French fleet was largely neutralized during the action but Georges Leygues managed to survive and was relocated at Toulon in the south of France. On September 9th, 1940, the warship departed with sister ships Montcalm and Gloire and traversed the Strait of Gibraltar despite a British presence overlooking entry/exit into the Mediterranean/Atlantic. She then anchored at Casablanca (Morocco), taking on fuel and supplies, before arriving at Dakar (Senegal) on September 14th. While en route to Libreville (Gabon) the trio was met by a British naval force which forced them to return to Dakar. The British, joined by the Australians and Free French forces, enacted "Operation Menace" in an effort to take Dakar. This lasted from September 23rd to the 25th but the operation came up short.

Following the success of the Allied landings in North Africa (Operation Torch - November 1942) and the occupation of Vichy France by the Germans, French naval elements, including Georges Leygues, Montcalm, and Gloire joined the Allied cause. The operation proved critical as it marked the beginning of the removal of Axis forces from the African continent while also restricting enemy movement across the Mediterranean. With her commitment in the operation complete, Georges Leygues was reassigned to patrolling the Atlantic and managed to run down, and scuttle, the German ship "Portland". After this action she was sent to Philadelphia, USA for a needed refit which lasted from July until October 1942. She received improved anti-aircraft armament and lost her ability to launch and recover aircraft.

Georges Leygues was present during the Allied invasion of Normandy in Northern France during D-Day (June 6th, 1944) and her guns were used in the massive bombardment leading up to the formal amphibious landings by ground forces. By August, she was relocated south to support further Allied actions in France as the Normandy beachhead grew and forces managed their way inland. The warship entered Toulon once again for September 1944 and was used in bombarding Italian positions at and near Genoa. She remained in the area until March 1945, marking her last notable commitment in World War 2 fighting. German leader Adolph Hitler committed suicide in late April and the war in Europe was over in May of 1945.

In the post-war years, Georges Leygues underwent a refit from May of 1945 to January of 1946 and she joined Montcalm in supporting French military actions across Indochina during 1954. Two years later, she was part of the contingent supporting the war against Egypt marking the "Suez Crisis" (October-November 1956). This became her last notable combat service as the vessel was officially decommissioned on May 1st, 1957 and her hulk sold for scrap in November of 1959.

(Not all weapon types may be represented in the showcase above)
Early:
4 x Gourdou-Leseurre GL-832 HY floatplane aircraft