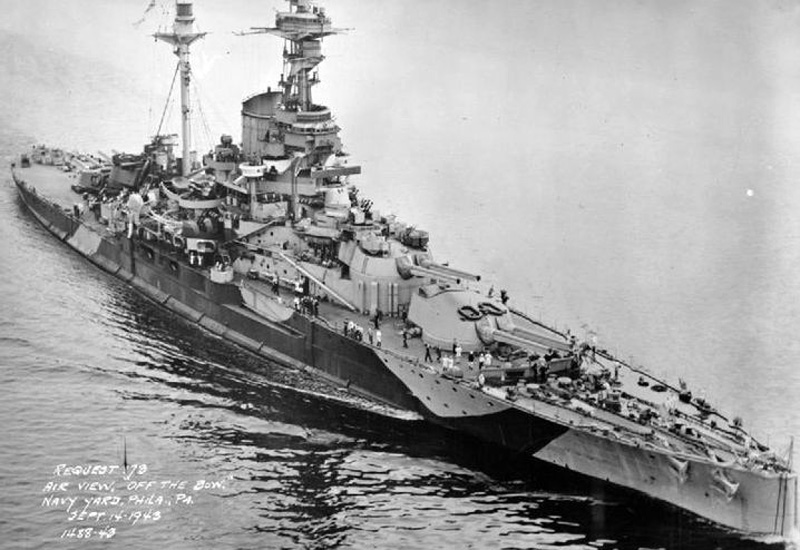 HMS Royal Sovereign, a battleship of World War 1, served the Soviet Navy during the latter half of World War 2 as the Arkhangelsk.

Authored By: Staff Writer | Last Edited: 03/09/2017 | Content ©www.MilitaryFactory.com | The following text is exclusive to this site.
In 1941, the Soviet Navy could claim just three battleships to its name and the fleet was comprised largely of torpedo boats, submarines, and destroyers as well as seven cruisers (of which only four could be considered modern types). As its commitment to the fight against the Axis powers grew following the German invasion of the Soviet Union through "Operation Barbarossa" in June of 1941, the Navy became the recipient of foreign assistance. HMS Royal Sovereign (05), formally of the British Royal Navy and commissioned for service during the First World War in 1916, was handed over to the Soviet Navy (on loan) on May 30th, 1944. Once acquired, the vessel was renamed to "Arkhangelsk".

The Soviets changed little of the Royal Sovereign's plan and, as such, she retained her 4 x 15" main guns set in four twin-gunned turrets (two forward, two aft). Other armament included 6" guns and 20mm Oerlikon AA guns. Armor protection ranged from 13" at the belt and 4" along the deck to 13" at the main turrets and 6" at the bulkheads. A single funnel was based at midships and the superstructure was mainly concentrated around it with two main masts being featured. Power was from 18 x Babcock & Wilcox boilers feeding 4 x steam turbines developing 40,000 horsepower to 4 x shafts under stern. The crew complement numbered 1,240 men and speeds reached 23 knots with ranges out to 7,000 nautical miles.

The warship journeyed from British home waters as part of Convoy JW59 in August of 1944. She arrived and was berthed at Kola in Murmansk Oblast, Russia where she survived several German Navy attacks directed at her. The warship was officially commissioned into Soviet Navy service on August 29th, 1944 and went on to serve as flagship operating in the Arctic Ocean where convoys from Britain continually ran to and fro to help supply the Soviets. She served in this capacity until the end of the war in 1945.

In 1947, the vessel ran aground but recovered and, in February of 1949, Arkhangelsk was hesitantly handed back over to the British. In return, the Soviet Navy claimed the Italian battleship "Giulio Cesare" (detailed elsewhere on this site) and this warship was assigned to the Black Sea Fleet. Arkhangelsk / Royal Sovereign, now under British ownership, was found to be in poor condition and ultimately scrapped.