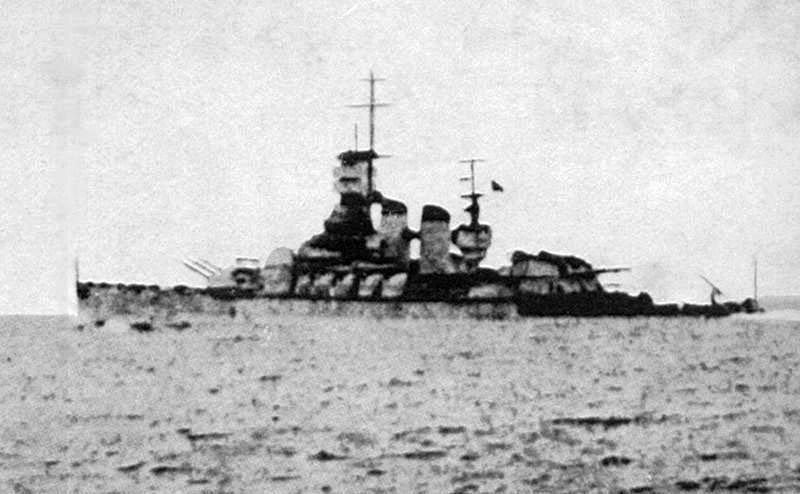 Fast and well-armed, the Italian battleship Vittorio Vento and her sister ships were short on endurance.

Authored By: Staff Writer | Last Edited: 04/24/2018 | Content ©www.MilitaryFactory.com; the following text is exclusive to this site.
From 1934 to 1942, the Italian Navy (the Regia Marina) funded construction of a four-strong class of new battleship known as the Littorio-class consisting of Littorio, Vittorio Veneto, Roma, and Impero. Of the four planned, only three were completed as Impero, launched in 1939, had her construction stopped with a shifting Italian focus placed on escort warships. The remainder of the class became a key contributor to Italian naval operations of World War 2 where each managed to play a own role in the conflict. For Vittorio Veneto, its wartime service was one of merciless action, being severely damaged on several occasions by Allied warplanes.

Vittorio Veneto was ordered on June 10th, 1934 and saw her keel laid down by builders on October 28th of that year. She was launched on July 25th, 1937 and formally commissioned for service on April 28th, 1940. She was named after the Battle of Vittorio Veneto (October-November 1918), an Italian victory over the Austro-Hungarian Empire during World War 1.

Vittorio Veneto featured a conventional three-turret arrangement for its main guns, two located forward and one aft of the central superstructure. The main mast was the tallest protrusion of the warship in profile as well as the operating bridge. The rear mast bookended the twin smoke funnel arrangement at midships. The forward deck area was largely unobstructed as was the stern area. A crane was featured at the extreme end of the ship and used for recovery of floatplanes of which up to three could be carried. Launching of these aircraft was through a single catapult set over the stern to which the airplanes could provide for eyes-in-the-skies and aid in gunnery accuracy. The complete crew complement numbered up to 1,950 personnel. Armor protection reached 14 inches at the main belt with her decks covered in 6.4 inches of plate, her turrets up to 13.7 inches, and her conning tower at 10 inches. Dimensions of the vessel included a length of 780 feet, a beam of 108 feet, and a draught of 31 feet. Displacement was 41,376 tons (short) under normal loads and up to 46,000 tons (short) under full loads.

Her machinery was led by 8 x Yarrow boilers feeding 4 x steam turbines which drove 4 x shafts under the ship through 128,000 shaft horsepower output. Maximum speed reached 30 knots in ideal conditions with a range out to 3,920 miles. Crew supplies also limited the vessel's endurance.

Armament, the key to most any successful battleship, centered on 9 x 15" (381mm) /50 caliber main guns set across three triple-gunned turrets. This was supported by 4 x 6" (152mm) /55 caliber guns in triple-gunned turrets. 4 x 4.7" (120mm) /40 caliber guns were carried for illuminating targets in low-light engagements. Anti-aircraft defense was through a network of 12 x 90mm /50 caliber single-gunned turrets, 20 x 1.5" (37mm) /54 caliber guns (twin- and single-gunned turrets), and 10 x 0.79" (20mm) cannons in twin-gunned turrets.
In June of 1940, the Italians entered the war on the Axis side and in August Vittorio Veneto were pressed into service. From August 31st to September 2nd the battleship was used on patrol actions in the hopes of meeting up with British convoys from Gibraltar to Alexandria, Egypt. At this point in the war, the Italian Navy held a distinct advantage in firepower and overall presence in Mediterranean waters - certainly enough to threaten British movements now that France had fallen. The battleship and her accompanying forces failed to meet up with any enemy during this period which ended in October. On November 10th-11th, the British enacted their famous air raid on the Italian naval base at Taranto. The resulting attack netted three Italian battleships damaged but left Veneto Vittorio largely untouched. The vessel was named flagship of the Italian fleet when she arrived at Naples.

Her next action was in the Battle of Cape Spartivento near Sardinia during November 1940 which again pitted the Italians against the British. The Italians could field only two of their battleships, including Vittorio, along with six heavy cruisers and fourteen destroyers against a sizeable British force that featured one aircraft carrier and several other warships of varying capabilities. Results of this battle were inconclusive as each side claimed just a damaged warship.

Vittorio was present during the Battle of Cape Matapan near Greece during March 27th-29th, 1941. A combined Australian-British force, which included an aircraft carrier and three battleships, tangled with an Italian force featuring a sole battleship, six heavy cruisers, two light cruisers, and seventeen destroyers. Three torpedoes launched from HMS Formidable's Fairey Swordfish biplane bombers ended close to Vittorio though only one scored a direct hit, this above the portside outboard propeller. Sea water began flooding her compartments and this gave the vessel a noticeable list. Nevertheless, the battleship was able to make headway and retreat to safety. She underwent repairs at Taranto from late-March 1941 to July and was not activated again until August. The battle was crippling to the Italians with the loss of 2,400 men, three heavy cruisers, two destroyers, and the Vittorio left heavily damaged.

After having been repaired, Vittorio's fortunes did not improve. She was targeted by the Royal Navy attack submarine HMS Urge while in the Straights of Messina between Sicilia and Calabria. The submarine sent three total torpedoes her way with one managing to find Vittorio's portside. The hull was ripped open and flooding ensued, forcing the Italian battleship back to Taranto for repairs which kept her out of the war until the early part of 1942.

During June of 1942, Vittorio joined other Italian warships in attempting to intercept an Allied convoy targeting Alexandria. American bombers managed successful strikes on the Italian warship during a scuffle though no serious damage was reported by Vittorio. In November, the battleship made her way from Naples to Taranto and survived a torpedo attack from HMS Umbra. The Italian fleet was then moved to La Spezia for protection against Allied air raids though, on June 5th, 1943, the battleship was the recipient of Allied bombs during a raid which left her severely damaged once again. The warship was then sent to Genoa for repairs. With the Italian surrender in September of 1943, Vittorio was relocated to Malta for its surrender and unsuccessfully attacked by German warplanes while en route.

Vittorio made it to Malta and remained there until September 14th, 1943. She was directed towards Alexandria and was later moved to the Suez Canal where she was laid up until October 1946. Upon allowed entry back into Italian waters, she was handed over to the British as a war prize and stricken from the naval register on February 1st, 1948. Her hulk was then sold for scrapping between 1948 and 1950 and her naval history officially ended. Some of her guns were used as coastal batteries by Yugoslavia and survived until the 1990s.

(Not all weapon types may be represented in the showcase above)
3 x Floatplane aircraft (typical).