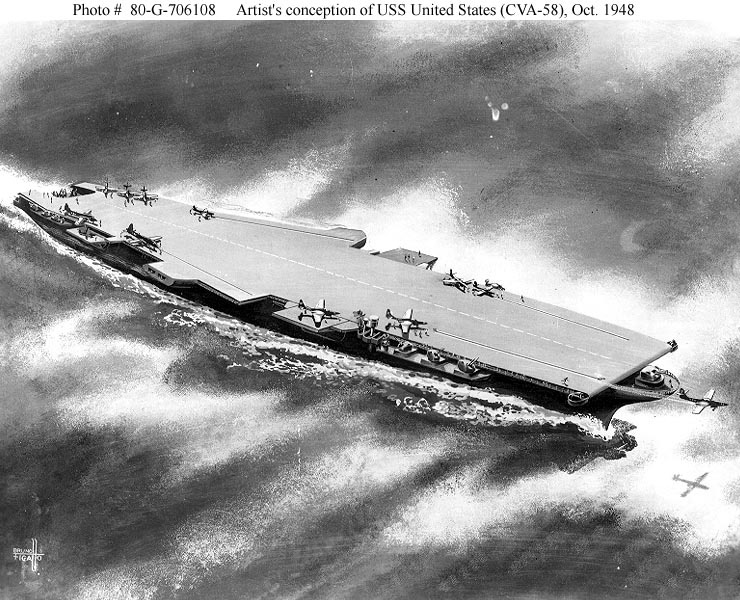 The USS United States was to lead a five-strong class of nuclear bomber carriers but was doomed by post-World War 2 politics.

Authored By: Staff Writer | Last Edited: 04/14/2016 | Content ©www.MilitaryFactory.com | The following text is exclusive to this site.
The modern United States Navy carrier fleet owes much to the combat experience garnered by officers, sailors and airmen during World War 2 (1939-1945). A slew of carriers were used in wrestling control of the Pacific from the Japanese Empire and countless operations were based on the success and availability of the American carrier force in the region. Indeed even the success of the Japanese attack on Pearl Harbor in December of 1941 hinged on the American carrier force being in port at the time (it was not).

At the end of World War 2 the new enemy for the Free World became the Soviet Union which began the Empire's phase of propaganda and power projection that took it as a recognized global superpower into the late 1980s. By this time, conventional warfare had evolved to include atomic and nuclear weapons and spurred development of various delivery methods which eventually included high-level bombers, submarine-launched missiles, and Intercontinental Ballistic Missiles (ICBMs) themselves.

Before more advanced delivery methods could be had, the conventional bomber was what was available to American warplanners. The idea arose to combine the go-anywhere qualities of a newer, more powerful "supercarrier" with the capabilities of large bomber types launched from its flight deck. Because of the size of bomber the vessel was to take on, it was decided to develop a carrier with a "flush deck" meaning it was to lack a true island superstructure common to the wartime designs (and modern designs for that matter). This would allow unfettered access to the deck by bombers managing considerable wingspans.

Five vessels were planned for the new "United States-class" based on the 1949 Naval Appropriations Act and these were to succeed the post-World War 2 Midway-class ships. The lead ship would become USS United States (CVA-58).

Beyond cost ($189 million per unit in 1949 dollars) there were several immediate problems to come from the proposed design: lack of a dedicated island superstructure restricted onboard communications and sensors generally held on a high-reaching mast. Additionally, the conventionally-powered nature of the warship would require smoke funnels that would not interfere with the flush deck design approach. To this was added the simple fact that there was to be no hangar elevators nor below-deck hangar space for large bombers. As such they would have to permanently reside on the deck regardless of the conditions outside - subject to being tossed about in violent weather and exposed to the corrosive effects of sea spray. There would be a contingent of jet-powered fighters held under the flight deck to serve as bomber escorts. Planning saw up to 18 bombers carried along with 54 fighters giving an air wing strength of over seventy fixed-wing aircraft.

Despite these limitations, construction of USS United States proceeded as far as her keel being laid down by Newport News Drydock and Shipbuilding on April 18th, 1949. However, just five days later, then-Secretary of Defense Louis Johnson cancelled its construction and all hope for the USN "bomber carrier" ended - leaving nuclear delivery squarely in the hands of the United States Air Force.

As finalized, the United States-class was to feature a displacement of 83,200 tons under full load, a length of 1,090 feet, a beam of 190 feet, and a draught of 37 feet. Power was to come from 8 x Foster-Wheeler boilers feeding 4 x Westinghouse steam turbines through 280,000 horsepower driving 4 x shafts under stern. Maximum speed in ideal conditions was listed at 33 knots. The total crew complement was 3,019 personnel and a further 2,480 persons making up the air wing. Standard armament (for local defense) was 8 x 5" (127mm) /54 caliber guns, 16 x 76mm /70 caliber guns in eight twin-gunned turrets, and 20 x 20mm Oerlikon cannons.

(Not all weapon types may be represented in the showcase above)
Up to 54 fighter- and 18 strategic bomber-type jet-powered aircraft making up the proposed air wing.