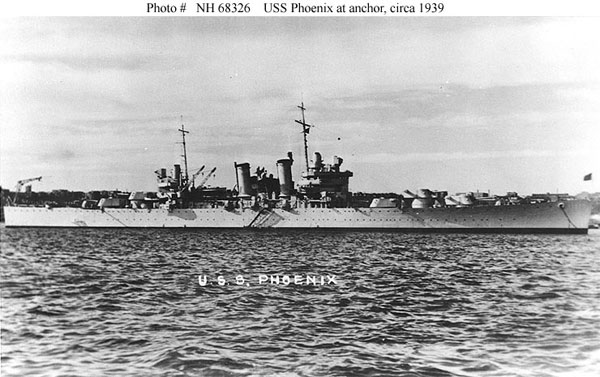 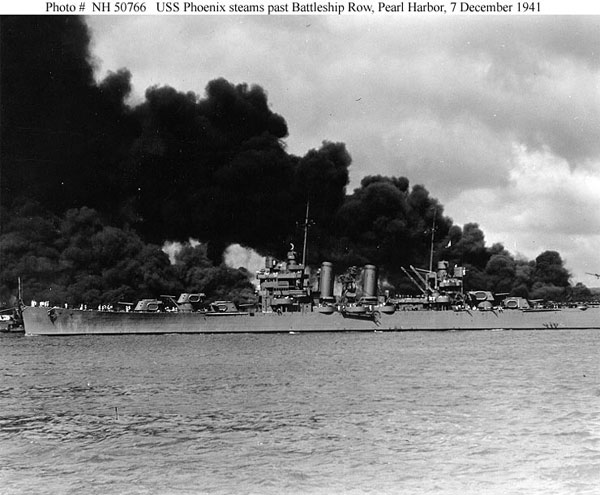 The USS Phoenix survived the rigors of World War 2 under the flag of the USN only to meet her demise in the Falklands Conflict under the banner of the Argentine Navy,

Authored By: JR Potts, AUS 173d AB | Last Edited: 04/02/2019 | Content ©www.MilitaryFactory.com; the following text is exclusive to this site.
USS Phoenix (CL-46), was number five of seven built of the Brooklyn-class light cruisers and was commissioned on 10/03/1938. All served in World War II and were armed with five 6 inch gun turrets, three forward and two aft. The Brooklyn Class was developed from the conditions of the London Treaty of 1930 that limited the size of warships to 10,000 tons after World War I. In this case heavy cruisers and gun sizes over 6 inches were not allowed. The US Navy was concerned about the restrictions but found the Brooklyn class was equal to the new Japanese Mogami class cruiser launched with fifteen 6 inch guns. A number of gun sizes were used to satisfy the treaty, the main armament was the 6 inch 47 caliber guns mounted (5x3) the new MK 16 that fired a 130 lb shell 14.5 miles or 26,100 yds (23,900 m). Eight 5 inch 54 caliber (127 mm) guns in mounts (8x1) used for close in shore bombardment and anti aircraft protection. For additional anti-aircraft protection were twenty 20 mm (10x2) mounts and twenty eight 40 mm (4x4 & 6x2) mounts were preferred. The class proved to fit the role needed for the light cruiser duty including convoy protection, and shore bombardment. The majority of cruisers built in WWII were similar to this successful Brooklyn design.

During the pre war years USS Phoenix patrolled the United States West coast and was later based in Pearl Harbor in 1941. On December 7, 1941 she was anchored next to the hospital ship Solace southeast of Ford Island. Phoenix was not a primary target of the attack, Japanese planes were focused on Battleship row, so as the planes flew by the crew of the Phoenix opened fire. Phoenix like the mythical bird she was named after rose from the ashes and by noon was underway. She was ordered out of the harbor to join the small task force of ships who escaped from Pearl who unsuccessfully searched for the enemy fleet. After some convoy duty between Pearl Harbor and the main land she departed for Australian waters with a force of ships. For some time she escorted troop ships and provided convey protection, her main sailing was in and around Australian waters. In February 1942 Phoenix was sailing towards Ceylon in convoy duty with the USS Langley a seaplane tender and the HMS Sea witch. The three ships were ordered to change course towards Java at top speed due to the Japanese invasion in the East Indies. Langley was sunk by IJN planes but Phoenix and Sea witch survived.

Through 1944 Phoenix continued on convoy duty and troop support landings. On Biak Island she was assigned to cover MacArthur's landing and destroyed shore batteries that had fired on and hit two U.S, Navy destroyers. Before American forces landed on Noemfoor Island Phoenix had been assigned shore barrage duties and after recon was completed it was found that Phoenix had neutralized troops and aircraft in her assigned bombardment zone. In the battle of Leyte Gulf Phoenix was assigned to Admiral Oldendorf's fleet that was assigned to protect the Surigao Strait. The Japanese Southern Force sailed towards the Strait with the Battleship Yamashiro screened by two cruisers and destroyers. In this night attack Phoenix using her radar targeted an approaching ship and fired broadside salvos with all of her fifteen 6 inch guns. The target was later identified as the Yamashiro, which sank in 27 minutes of fire in the classic "Crossing the T" engagement. Phoenix and the rest of Oldendorf's fleet also destroyed the cruisers Fuso, three destroyers and damaged the cruiser Mogami which was sunk the next day. In route to Lingayen Gulf to support the invasion of Luzon, Phoenix sighted a submarine in the Mindanao Sea; the Japanese sub fired two torpedoes at Phoenix. Expecting this she began zig zaging and the torpedoes missed. The destroyer USS Taylor operating in the area attacked the midget sub forcing her to the surface with depth charges and rammed her. While in route to Pearl Harbor for refit Japan surrendered, sent home through the Panama Canal Phoenix joined the Atlantic fleet. Phoenix and her brave crew earned eleven battle stars during her World War II service.

(Not all weapon types may be represented in the showcase above)
4 x OS2U King Fisher recoverable seaplane reconnaissance aircraft.