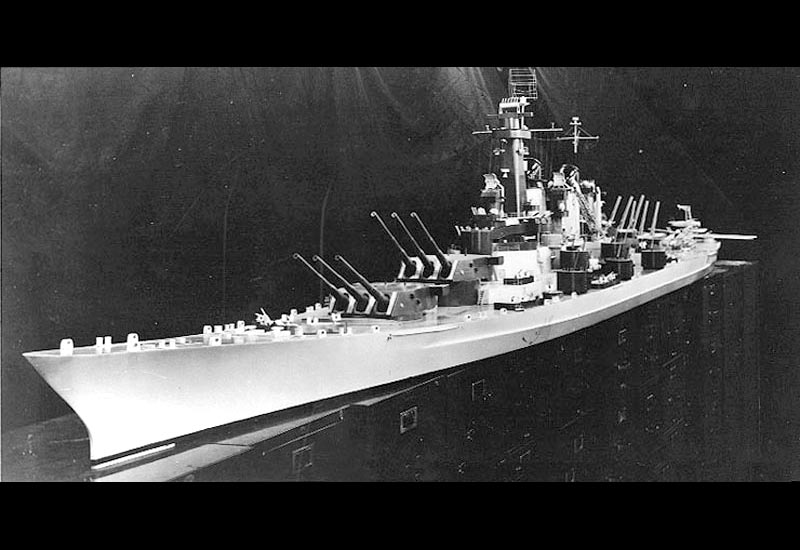 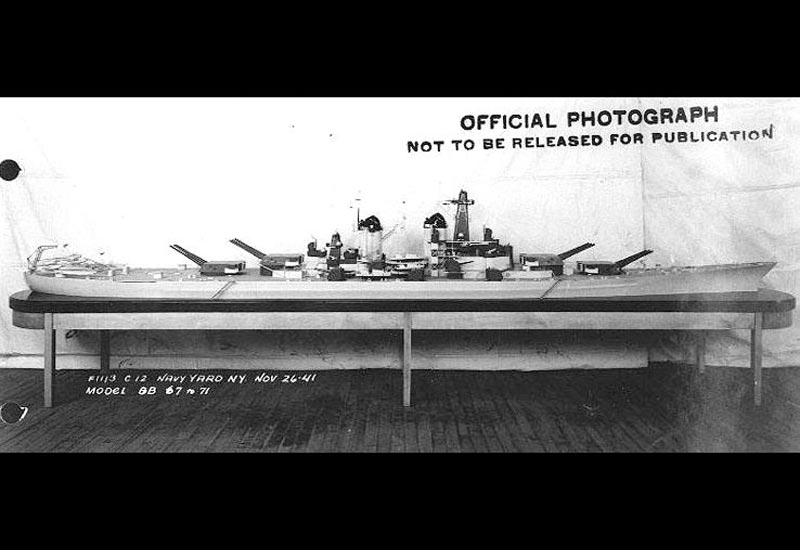 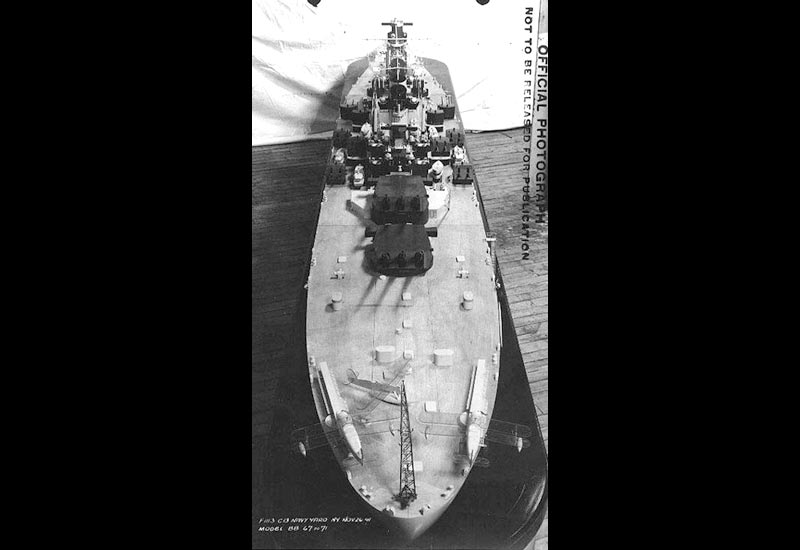 USS Montana was to have been the most powerful battleship ever devised for the USN but the emergence of the aircraft carrier during World War 2 sealed her fate.

Authored By: Staff Writer | Last Edited: 09/07/2018 | Content ©www.MilitaryFactory.com; the following text is exclusive to this site.
To counter the growing threats posed by Japanese warships, particularly the mighty IJN Yamato battleship - considered by most to have been the most powerful battleship ever built - the United States government authorized the construction of a new class of fighting surface ship on July 19th, 1940 to follow the preceding Iowa-class into service and further strengthen American naval power against what looked to be an imminent war with the Empire of Japan. The new breed, built around firepower and stout armor protection (though at the expense of speed), became the Montana-class and would entail the construction of five total ships. At least three shipyards were contracted with their manufacture - the New York Naval Shipyard, the Philadelphia Naval Shipyard and Norfolk Naval Shipyard.

The Montana-class of battleships would go on to become the last battleships to be authorized for production by the United States Navy - not only in World War 2, but in its storied history. The USS Montana (BB-67) would naturally become the lead ship the class and her proposed sisters were designated as follows: USS Ohio (BB-68), USS Maine (BB-69), USS New Hampshire (BB-70) and USS Louisiana (BB-71). However, by this time in naval history, the aircraft carrier had proven its worth for the American Navy, particularly during and after the Battle of Midway, and priority in the American war effort had now shifted to design and production of more aircraft carriers. This shift inevitably signaled the end to the battleship era and her reign as undisputed queen of the sea. The United States Navy had learned - and effectively shown the world along the way - that future battles at sea would be decided by air elements and not so much by big-gunned surface warships as in decades past. The lean towards aircraft carriers meant that no part of any of the Montana-class ships was ever produced or laid down - the USS Montana herself would exist only in drawings and scale models.

The design profile of the Montana was a rather conventional effort as battleships of the time went. The differentiating factor between it and the preceding Iowa-class was its additional aft turret emplacement. All main gun weaponry was housed in large armored turrets that stood stories tall from their roof to their bases, requiring dozens of gunnery crew to manage. At amidships there was contained the bridge and major superstructures for the various required warfare and logistics departments. A pair of smoke funnels was noticeable between the forward and rear superstructures. A bevy of antenna and arrays dotted her vertical reaches. The bow deck was relatively featureless and rose out of the water to cut through rough seas. A massive support crane could be seen at amidships, designed to take on the large amounts of stores needed to feed and house the crew. The vessel would have been home to approximately 2,355 standard personnel though this number could balloon to 2,780 if needed - either in wartime or when she would be fielded as a flag ship of the fleet.

Montana's proposed standard displacement was estimated at 66,000 tons on a standard load and some 71,000 tons with a war load. Her running length was over 920 feet with a beam of exactly 121 feet and draught of just over 36 feet.
Power for the USS Montana was slated to be no fewer than 8 x Babcock & Wilcox brand boilers delivering to 4 x Westinghouse geared steam turbines powering 4 x propeller shafts at 43,000 horsepower. Performance specifications were estimated with a top speed of 28 knots in ideal conditions through a range equaling some 17,000 miles (the IJN Yamato rated at 27 knots and 8,286 miles).

Armament was the heart and soul of any battleship and, had she been completed, the Montana would have been the most powerful USN vessel of her time. Montana (and her sisters) would have sported a main battery consisting of 12 x 16" (406mm) /50 caliber Mark 7 series guns held in four traversing turrets - each could be elevated individually and fired individually or synchronized. In comparison, the IJN Yamato fielded nine guns of 18.1 inch caliber - the largest ever fitted to a naval vessel. Three 16" gun barrels would have been fitted to each turret emplacement with two held forward of amidships and another two rear of amidships. This allowed the power of twelve full large-caliber guns to be brought to bear in a full broadside or have at least six guns apiece attack targets to the front or to the rear. The guns could be used to attack surface targets at sea or deliver powerful off-shore shelling against targets inland. Additional firepower was to come from the fitting of 20 x 5" (127mm) /54 caliber Mark 16 series gun emplacements fitted about her decks - these could also be used against surface targets or inland targets within range. Anti-aircraft support was an impressive network of up to 40 x Bofors 40mm cannons and a further 56 x Oerlikon 20mm cannon systems - such defense allowed battleships to provide umbrella support for fleet ships such as the lesser-defended aircraft carriers.

Like other battleships in the American Navy, the Montana would have sported a pair of floatplane aircraft for reconnaissance purposes. These aircraft were launched via a catapult system fitted to the stern deck of the vessel. Once airborne, the aircraft could be used to radio back enemy positions for coordinated assault or assist in spotting for the main gun batteries. Floatplane aircraft could then land on water, near the stern of the Montana, and be collected by way of a heavy duty crane installed between the twin catapult rails. The aircraft could then be maintained and readied for future sorties.

The future of the Montana-class was in doubt by July 21st, 1943 when a formal suspension of the program was issued amidst the changing war in the Pacific. The Empire of Japan was increasingly losing ground to the Allied push and the aircraft carrier played an ever increasing role in her demise. The aircraft carrier had essentially rendered "big gun carriers" at sea a rather novel fixture for they proved large, plodding targets that required thousands of personnel to operate and her use of fuel and oil meant that a single battleship was expensive to operate. While some of these detrimental qualities transferred to carriers themselves, their ability to send aircraft aloft and strike at the heart of the enemy or defend the fleet was more than what the battleship offered at this stage in the war. As more and more navies would commit to the construction of their own aircraft carriers, the future for the battleship was now marked. With such a vast departure from the preceding norm, the Montana program fell to the pages of US Naval history - no longer would nations commit such a vast amount of resources to their construction and operation. Even the fable American Iowa-class were eventually retired and mothballed from active service, becoming museum ships for the going public to peruse. In contrast, the aircraft carrier - finding her purpose in World War 2 - remains the true symbol of naval power for any nation, even today with the US Navy appropriately leading the way by fielding nearly a dozen such ships.

(Not all weapon types may be represented in the showcase above)
3 OR 4 x Vought OS2U Kingfisher OR Curtiss Seahawk floatplanes.