The supercarrier USS Gerald Ford was expected to join ranks of the United States Navy sometime in 2015 - delays have pushed her commissioning date. 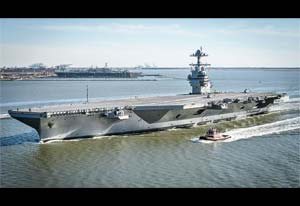 As of mid-2017, USS Gerald R. Ford (CVN-78) is the newest, full-sized aircraft carrier to be contracted by the United States Navy (USN) and represents a next-generation "supercarrier" featuring advanced systems, subsystems and onboard facilities to make her the most powerful surface warship on the high seas. As the leas ship of the Ford-class, USS Gerald R. Ford headlines a group of fighting ships that currnetly (2017) includes USS john F. Kennedy (CVN-79) and USS Enterprise (CVN-80). The Ford saw its keel laid down on November 13th, 2009 and she was launched to sea in November of 2013. Formal commissioning followed on July 22nd, 2017.

She marks the first all-new aircraft carrier design for the United States Navy in some forty years and directly replaces USS enterprise (CVN-65).

The USS Gerald Ford was afforded her namesake after former US President Gerald Ford, who passed away in 2006. The former president served with the U.S. Navy during World War 2 (1939-1945) as an officer on the aircraft carrier USS Monterey (CVL-26).

Newport News Shipbuilding (Northrop Grumman) became the contracting activity for USS Gerald Ford in July of 2003 with follow up contracts granted in 2004 and 2008 and the project eventually ranging in the billions of dollars (the Ford alone is tagged at an estimated $11.5 billion).

Outwardly, the Gerald Ford-class of ships sports a design look akin to the existing Nimitz-class nuclear-powered aircraft carriers with a few notable exceptions. The flight deck makes up most of the ship's surface area and there are four aircraft launching positions, two at the bow and two at portside near amidships. The angled retrieval deck is retained, running from the stern to the portside though the key difference in the Gerald Ford-class is the relocation of the island superstructure to a more aft position along the starboard side. This results in the relocation of the aft starboard side hangar elevator closer to amidships. This hanger is further joined by a second starboard side hangar elevator as well as a single portside hangar elevator (Nimitz-class carriers make use of four such hangars - three to starboard and one to port). The new configuration is said to make for higher mission turnaround times than achieved in previous American carriers based on decades of operational experience. In all, the class will be able to consistently launch at least two aircraft simultaneously while retrieving one during full combat operations. The hull follows traditional design contouring though a greater emphasis is placed on making the vessel more inherently "stealthy" - the initiative is consistent with other next-generation US Navy warships such as the advanced destroyer USS Zumwalt (DDG-1000). Ford's displacement is 110,000 tons (short) under load with an overall running length of 1,106 feet with a beam (flight deck included) equal to 256 feet and a draught of 250 feet.

The flight deck is constructed with the island (or flight command center) some 140 feet farther aft and three feet outboard and some 20 feet taller than previous American carrier designs. This new design allows the Ford-class carrier to have an estimated 25% increase in flight missions-per-day compared to the previous Nimitz class carriers - and this also accomplished with fewer crew members committed. The ship has required 10 million feet of electric cable and 4 million feet of fiber optic cable for its various systems and subsystems. To support the crew and ship's needs she has the capacity to produce 400,000 gallons of fresh water daily and the kitchen can supply 15,000 meals a day.
Advertisements

The conventional steam catapults used for launching aircraft found on other American carriers will give way to a new General Atomics-developed "Electromagnetic Aircraft Launch System" (EMALS) that relies on a linear drive motor to achieve maximum acceleration. EMALS promotes lower maintenance requirements and lower stress levels - the latter on aircraft and flight deck alike. On the other side of the flight deck, arrestor gear technology (AAG = Advanced Arrestor Gear) used to "reel in" incoming aircraft will be further improved upon over that of current level technology. The Ford-class will also make use of additional facilities that will overtake traditional crew roles thus reducing the number of specialized personnel required on board at any one time. Her total crew complement is expected to exceed 4,660 personnel including the required air wing and may reach in excess of 5,000. Comparatively, the Nimitz-class of fighting ships requires some 5,600 personnel to manage their various facilities and accompanying air wing.

Power is derived from a pairing of new-generation A1B nuclear reactors produced by Bechtel Marine Propulsion Corporation and these succeed current-generation A4W nuclear reactor series that have powered the preceding Nimitz-class of ships to this point. The reactor fits will allow the vessel to reach maximum speeds exceeding 30 knots in ideal conditions and the nuclear-nature of their design offers essentially unlimited travel range, capable of reaching any part of the world containing a connected body of water that allows her draught. The reactors hold a service life of approximately 20 to 25 years.

Defense is a modest, though advanced, network of improved RIM-162 "Evolved Sea Sparrow" surface-to-air missiles, a Rolling Airframe Missile (RAM) installation and a digital Close-In Weapon System (CIWS) as well as the AN/SPY-3 radar suite and active search-and-tracking features. Communications, search-and-tracking is managed through a composite mast atop the island. However, the vessel will still rely on its extensive support fleet for both ranged and point defense against inbound enemy aircraft, missiles, surface threats and undersea threats.

The heart-and-soul of USS Gerald Ford is her air wing comprised of modern and advanced fighters, strike aircraft, special mission aircraft, transports and helicopters - no competing foreign design can match the air arm of USS Gerald R. Ford by any stretch. The warship can carry up to 75 aircraft during its deployments and will make use of the newer Lockheed F-35 "Lightning II" (F-35C variant) once the strike fighter passes its requisite evaluations and certifications. For the foreseeable future, the stable will include the venerable Boeing F/A-18 "Super Hornet" multirole fighter for the fleet defense, direct interception and strike roles.

As it stands (2017), USS Gerald R. Fold represents the most powerful surface warship in the United States Navy arsenal, able to respond to actions in any part of the world and unleash its air arm on enemies as USN carrier groups have done so effectively in past wars.

November 2013 - On November 9, 2013, the United States Navy christened USS Gerald R. Ford (CVN 78) at the Newport News Shipbuilding facility. Adm. Jonathan Greenert, Chief of Naval Operations in charge of the ceremony was accompanied by the ship's sponsor, President Ford's daughter, Susan Bales Ford. Ms. Ford performed the ceremonial by breaking a special magnum bottle of Founder's beer against the ship's bow on Saturday morning. Before the christening Ms. Ford was given the opportunity to make welds on the ship and work on different ship systems giving a family personal touch to the construction process.

February 2016 - It is expected that USS Gerald Ford will be commissioned for service into the U.S. Navy sometime in 2016 and not in 2015 as originally planned. As of this writing (2016), she has been launched for evaluation and the requisite sea trials.

August 2016 - Continuing issues with the Ford has resulted in a Pentagon-ordered review of the $13 billion project. The Ford remains unfinished as of this writing (2016) and is awaiting commissioning.

April 2017 - USS Gerald Ford began builder's trials, utilizing her own propulsion system to get underway for the first time.

May 2017 - USS Gerald Ford has completed her acceptance sea trials in a major step towards becoming a commissioned warship in the United States Navy inventory. The trials were completed on May 28th, 2017.

July 2017 - USS Gerald Ford was officially commissioned into service with the USN on July 22nd, 2017.

March 2019 - It was announced that USS Gerald Ford faces delays in reaching complete operational readiness and capability (for final delivery to the USN). This latest delay centers on the nuclear powerplant and required adjustments to it.

January 2020 - USS Gerald Ford is undergoing compatibility testing of various platforms including the E-2D, C-2A, EA-18G, and T-45 series. Flight Deck Certification is tentatively scheduled for March 2020. Scheduled first-deployment for the Ford is in 2022.

February 2020 - USS Gerald Ford has been officially cleared to launch and retrieve aircraft from its decks using the new Electromagnetic Aircraft Launch System (EMALS) with Advanced Arresting Gear (AAG) recovery component. Testing on the equipment ended on February 11th, 2020. The EMALS system relies on a linear induction motor (with electromagnets) over the tried-and-true steam piston approach which has been in service for decades. The AAG is similar in its electromagnetic approach to bring an inbound aircraft to a halt, replacing the older hydraulic catching system.

March 2020 - USS Gerald Ford has achieved Flight Deck Certification - meaning it can begin qualifying naval airmen for both the USN and USMC.

June 2020 - A failure of its Electromagnetic Aircraft Launch System (EMALS) has forced USS Gerald R. Ford to return to port for review.

(Not all weapon types may be represented in the showcase above)
At least 75 aircraft of various makes and models including both fixed- and rotary-wing types as well as support for UAVs. 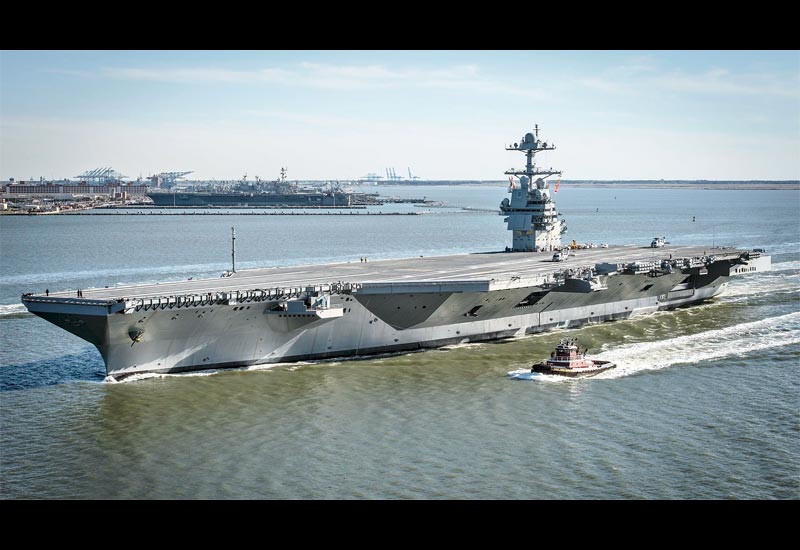 Image from the United States Navy.
2 / 3 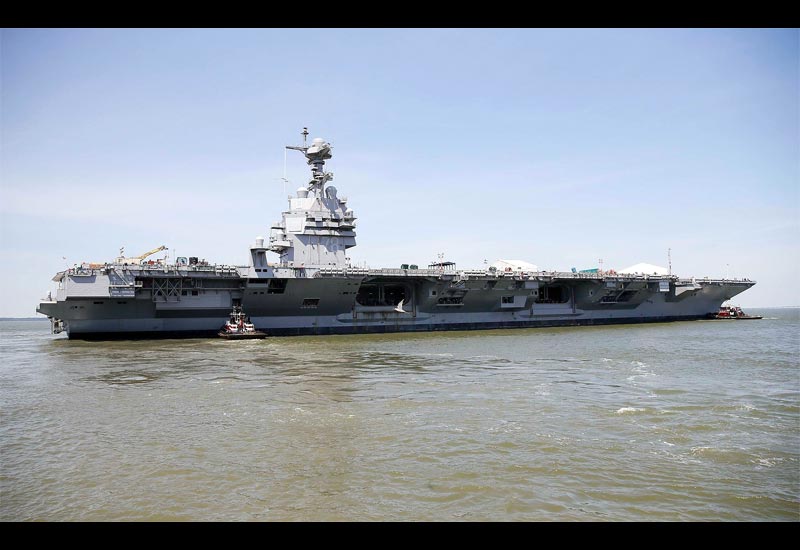 Image from the United States Navy.
3 / 3 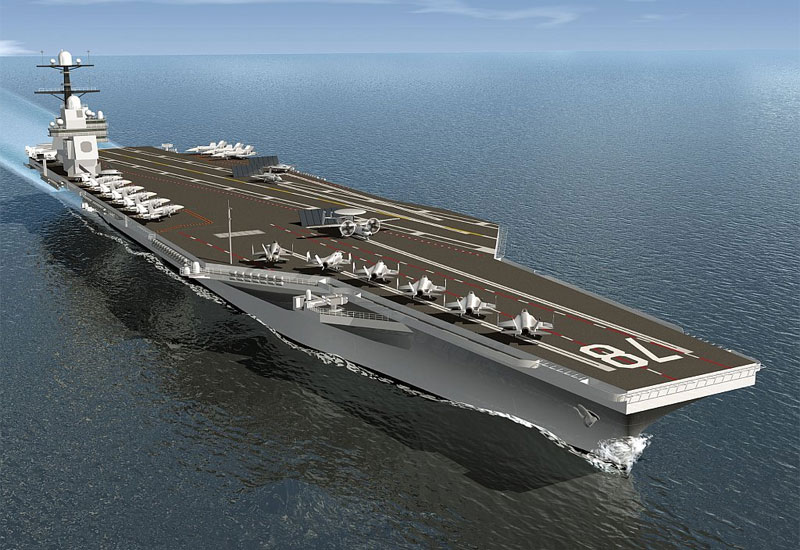