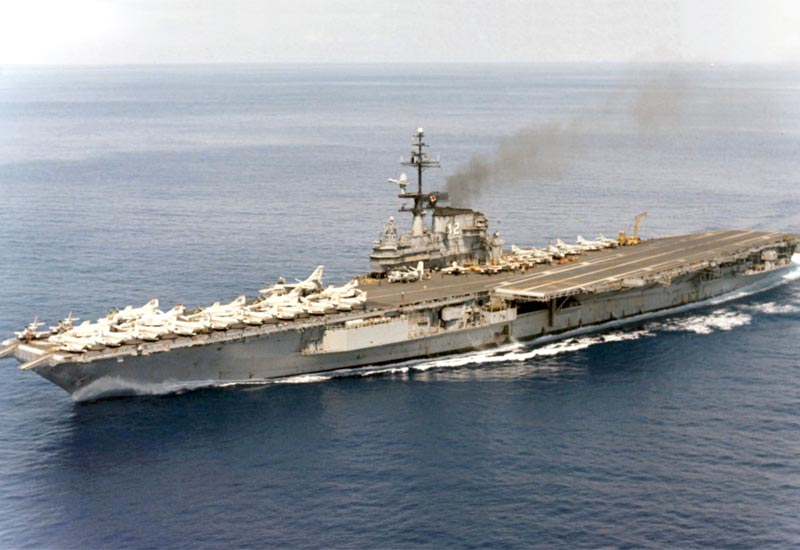 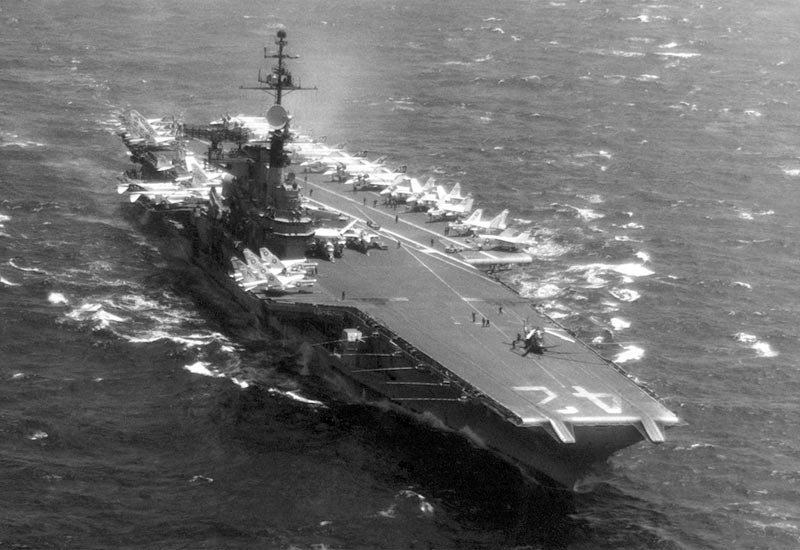 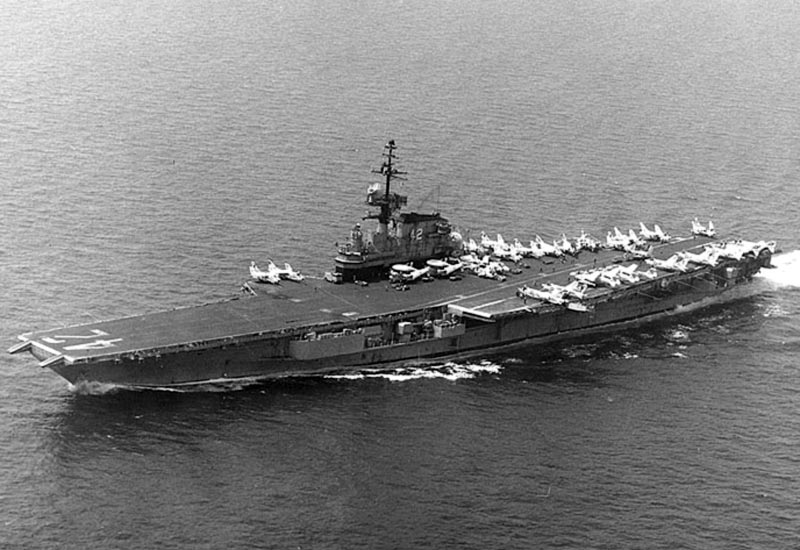 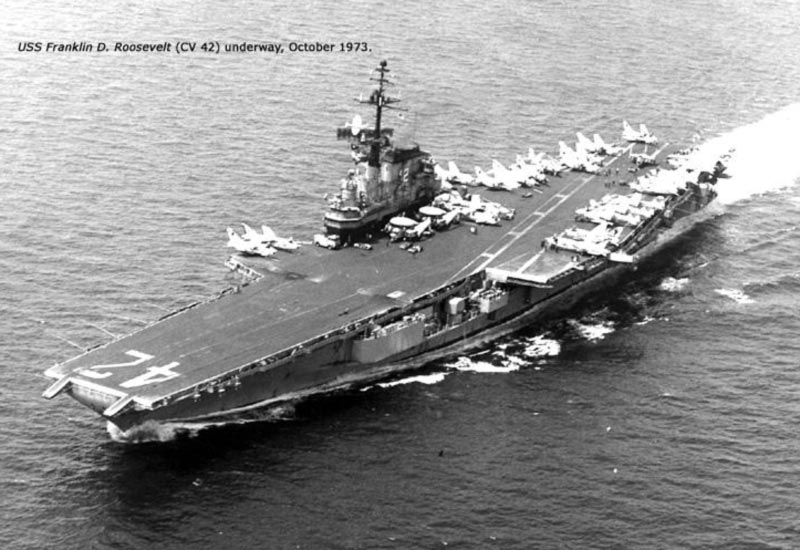 Ordered and built during the latter half of World War 2, USS Roosevelt failed to see combat in the conflict but still managed an operational existence until 1977.

Authored By: Staff Writer | Last Edited: 05/04/2021 | Content ©www.MilitaryFactory.com; the following text is exclusive to this site.
Even before the situation in the European Campaign of World War 2 (1939-1945) had settled, American war planners were concentrating on forcing the Japanese surrender in the Pacific. This meant that valuable aircraft carriers would be required in some number to traverse the vast expanses of ocean to bring the fight directly to the enemy. Progress was being made on the atomic program that would eventually lead to the Japanese surrender of August 1945 but more conventional routes were still being pursued and modern aircraft carriers were built as quickly as possible to shore up losses and improved regional strength.

On December 1st, 1943, the New York Naval Shipyard began construction of a new United States Navy (USN) aircraft carrier as the USS Coral Sea. The vessel would form part of a three-strong class (Midway-class) of carrier led by USS Midway (CV-41). Her construction period was such that the vessel was not launched until April 29th, 1945 and her sea trials spanned through the formal Japanese surrender meaning that the vessel was to arrive too late to see service in World War 2. Renamed as USS Franklin D. Roosevelt (CVB-42) when commissioned on October 27th, 1945 (to honor the late great wartime president who passed away on April 12th), the carrier was to have a greater impact on the world stage during the uneasy Cold War decades that followed.

The Roosevelt therefore become the second of the Midway-class which was put to sea during the period spanning 1945 to 1946. The third ship eventually carried the Coral Sea name (as USS Coral Sea (CV-43)). Originally six ships were planned though only these three were completed with the end of the war. The line was adopted to succeed the earlier 24-strong Essex-class ships and were themselves overtaken by the upcoming four-strong Forrestal-class carriers.

Roosevelt displaced at 45,000 tons and held a length of 968 feet with a beam of 113 feet and a draught of 35 feet. Her machinery was conventional, utilizing steam turbines that generated upwards of 212,000 horsepower and allowed for a maximum speed of 33 knots to be reached. Her crew complement was approximately 4,100 personnel and her early air wing numbered nearly 140 aircraft (this was reduced over the years as dimensionally larger jets were taken on - down to about 45 aircraft). Armament was decidedly influenced by American naval combat experience in World War 2 for it was primarily a network of guns made up of 18 x 5" /54 Mark 16 Anti-Aircraft (AA) guns backed by 21 x 40mm /60 caliber Bofors AA cannons (missiles would factor into later American carriers as that technology proved more adaptable for naval service). Armor protection measured 7.6 inches at the belt with decks protection in up to 3.5 inches.
One of CVB-42's first order of business was completing her requisite "shakedown" cruise to train personnel and prove her own systems viable for USN operation. She was present during the early part of 1946 in Rio de Janeiro as the new Brazilian president was sworn in to office. From there, she conducted several low-key operations in Caribbean waters before being dispatched to the Mediterranean from August to October. Once there, her services were used in support of the current Greek government attempting to stave off advances by Communist forces. Beyond that, the vessel also served as a show-of-strength in the region to the new world foe - the Soviet Union. Roosevelt was then relocated to the American East Coast until July of 1947 to which she then headed into harbor at the Norfolk Naval Shipyard for a much needed overhaul. This work lasted until September 1948 and modernized some of her critical components. The vessel then returned to Mediterranean waters and patrolled the region until recalled home for February of 1949. On October 1st, 1952, USS Roosevelt CVB-42 was reclassified as CVA-42.

Roosevelt then made several return tours to the Mediterranean in the years following. On January 7th, 1954, she set sail for conversion at Puget Sound Naval Ship Yard along the American West Coast. Unable to traverse the restrictive lanes of the Panama Canal, the Roosevelt instead rounded Cape Horn in the south of South America to reach her destination. She arrived at Puget Sound on March 5th and was decommissioned on April 23rd, 1954 for the work ahead (this included an angled flight deck, new steam catapults, and a revised bridge structure). With the conversion work completed, USS Franklin D. Roosevelt was reinstated for service in 1957. She was relocated to the Gulf of Maine to test out her various new systems (including tests of her new "Regulus" guided missile units). This then led to several sorties into the Mediterranean of which the last wrapped up in 1960. By this point, many of her AA guns had been removed. Back in 1958, Roosevelt served in the humanitarian role as it collected Americans and allies from Cuba as the "Cuban Revolution" took a turn for the worse. During the late-1960s, her air wing had advanced to carry fewer, but more technologically advanced, aircraft like the McDonnell F-4 Phantom II. She participated in actions concerning the Vietnam War (1955-1975) from 1966 to 1967, earning a single Battle Star for her contributions. A near-year-long overhaul then followed which modernized and improved fire prevention systems aboard the carrier. She was back in service on May 26th, 1969. While in Mediterranean waters, Roosevelt was placed on station (for possible humanitarian assistance) in the Middle East during the Yom Kippur War of 1973. On June 30th, 1975, Roosevelt's designation was changed for the last time to CV-42. During June of 1976, she took on a stock of Marine Hawker Siddeley AV-8A Harrier VTOL strike aircraft.

Soldiering on into the latter part of the 1970s, the 1940s-era carrier had seen her best days. Her final cruise was recorded during February of 1977 and saw Marine AV-8A Harriers approach her deck. Her services no longer needed (and her structure in decidedly terrible condition), she saw formal decommissioning on September 30th, 1977 - becoming the first of her class to see retirement. Her name was struck from the Naval Register soon after and her hulk was sold off for scrapping on April 1st, 1978. Only USS Midway survived the group to become a preserved floating museum ship (today residing in San Diego). USS Midway was not decommissioned until 1992 while USS Coral Sea was decommissioned some years earlier during 1990.

During her tenure of the seas, the USS Roosevelt served under various nicknames that included "Swanky Franky", "Foo-De-Roo", and "Rosie". Beyond her Battle Star, the ship was awarded the Meritorious Unit Commendation, the Navy Expeditionary Medal (three stars), the Navy Occupation Service Medal, the Vietnam Service Medal (five stars), the Navy "E" Ribbon (Battle "E" Device), and the Republic of Vietnam Meritorious Unit Citation (Gallantry Cross).

(Not all weapon types may be represented in the showcase above)
Up to 137 aircraft of various types (early service); Reduced to 45-55 aircraft as more modern types were taken on.