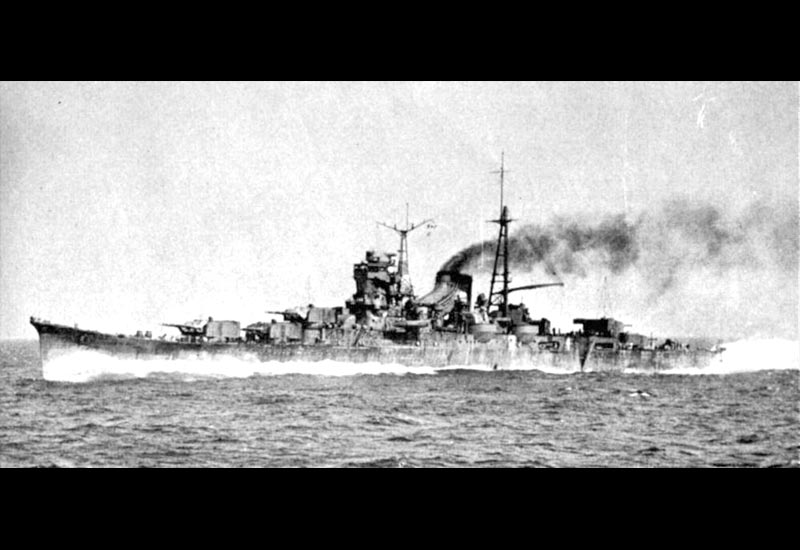 The Battle of the Surigao Strait on October 25th, 1944 cost the Imperial Japanese Navy the valuable Mogami Heavy Cruiser - which was reworked as a floatplane carrier by that time.

Authored By: Staff Writer | Last Edited: 08/29/2018 | Content ©www.MilitaryFactory.com; the following text is exclusive to this site.
During its naval modernization prior to World War 2 (1939-1945), the Mogami-class cruiser warship was added to the inventory of the Imperial Japanese Navy (IJN) fleet. This group consisted of four big-gunned fast cruisers that were originally categorized as "light cruisers" to acquiesce to the London Naval Treaty limitations. In time, however, the Japanese government discarded the limitations, up-gunned their cruisers and the warship were thereby categorized as heavy-class cruisers by the time of the fighting of World War 2.

Generally regarded as a design failure due to several inherent deficiencies from the get-go, the Mogami-class, led by IJN Mogami herself, succeeded the Tako-class heavy cruisers of 1930-1931 and were themselves succeeded by the Tone-class. In fact, the two ships of the Tone-class were to become the fifth and sixth vessels of the Mogami-class but the class proved such a disappointment in the early-going that the remaining pair were redrawn and completed as a whole new class.

The Mogami-class was constructed from 1931 until 1937 and entered commissioned service from 1935 to 1944. IJN Mogami was ordered in the 1931 budget and assigned to the Kure Naval Arsenal with her keel laid down on October 27th, 1931. On March 14th, 1934, she was launched to sea for trials and formally commissioned on July 28th, 1935 to begin her pre-war service.

She was named after the Mogami River of Yamagata Prefecture.

Her profile was typical of warships of the period: Primary armament was held in separate turrets with relatively excellent firing arcs offered about the front, rear, and sides hull of the ship. Midships carried most of the mass of the vessel and one of the main masts was set forward and the other aft of the centralized smoke funnel structure. Internally, power was from 10 x Kampon boilers feeding 4 x Geared impulse turbines developing 152,000 horsepower to 4 x Shafts under stern (with twin balanced rudders). This provided the warship with a maximum speed of 37 knots and a range out to 8,000 nautical miles. Aboard was a crew of 850 personnel. Dimensions included an overall length of 646 feet with a beam of 59 feet and a draught down to 18 feet. Displacement was 8,500 tons with electric welding and aluminum featured as a weight savings measure. Armor protection ranged from 125mm at the belt to 60mm at the deck and 25mm at the turrets.

The Mogami was also given an aircraft-launching and -recovery capability with its initial load being 3 x Aichi E13A series floatplane aircraft. The aircraft were crucial to the value of the ship in that the provided a much-needed eye-in-the-sky, over-the-horizon capability and assisted in directing gun fire.
As completed, the Mogami was a fast and well-armed cruiser warship for her time, utilizing the latest in naval construction but, on the whole, still limited by the London Naval Treaty. Her start immediately saw the warship suffer through a period of mechanical issues and defects in her construction quickly showed through. Her design showcased a poor seaworthy vessel that was top-heavy, a horrible quality for a large warship to have - particularly in rough seas. Her deficiencies were such that a complete overhaul of the class was eventually ordered to "right-the-wrongs", leading to a much improved warship before the end.

Mogami's first actions of World War 2 were in the invasion of French Indochina during the middle of 1941. The invasion of Sarawek in December of that year then followed and the warship was then featured in several high profile naval actions that included the Battle of Sunda Straight (February 1942), the Indian Ocean Raids (April 1942) and the Battle of Midway (June 1942). She took damage from American aerial bombs on June 6th.

Following this, she was earmarked for conversion as an "aircraft cruiser" which increased her fleet air arm to eleven Aichi floatplane aircraft, losing turrets No.4 and No.5 in the process. Type 21 air-search radar was also installed as were 10 x Type 96 triple-gunned AA guns (these replaced the original AA protection scheme). The changes led to an increase in overall length to 650 feet, beam to 66 feet and draught to 19.3 feet. Displacement followed by increasing to 13,670 tons. However, the major losses of aircraft carriers of the IJN at the hands of the Americans required such drastic conversions to be made.

American Navy torpedo boats closed in on her and accompanying IJN ships but Mogami survived this initial attack only to be later hit by gunfire from USS Portland which destroyed her bridge section, killing senior officers in the process. After colliding with Nachi during her retreat, Mogami began taking on water and her situation only worsened when onboard fires ignited several of her torpedoes in storage - this took out one of her engines. More Allied gunfire raked the warship until USN torpedo bombers moved in to finish her. Mogami remained afloat for two hours as crews abandoned her. IJN Akebono was called in to provide the death knell and sent her to the bottom of the sea with a torpedo hit. About 192 of Mogami's crew went down with her on October 25th, 1944 - bringing about her wartime tenure.

All four ships of the Mogami-class were sunk during actions in World War 2 - a fate seen with other ship and submarine classes fielded by the IJN as well.