HMS Queen Elizabeth became a veteran of World War 1 and served the Royal Navy throughout the interwar years and, ultimately, World War 2, before being sold off.

Authored By: Staff Writer | Last Edited: 06/26/2017 | Content ©www.MilitaryFactory.com | The following text is exclusive to this site. 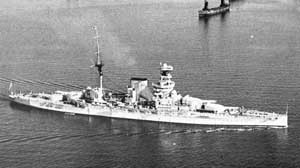 The British Royal Navy was the most powerful sea-going force by the time of World War 1 (1914-1918) and this was well-understood by the enemy - namely the German Empire who attempted to match the force pound-for-pound through their own naval build-up. It was up to Royal Navy to protect the British mainland and her overseas interests and much funding and work was put into keeping the group well-ahead of its foes. One of the products ultimately developed during the pre-war years became HMS Queen Elizabeth, a warring vessel taken from the mold of HMS Dreadnought of 1906. HMS Dreadnought rewrote the naval book of warships by introducing a uniformed, "all-big-gun" pattern with steam propulsion, adequate armor protection and speed. The ship eventually created an entire class of warships known simply as "dreadnought" while all previous battleships became obsolete, rendered as "predreadnought" vessels.

HMS Queen Elizabeth herself, something of a "Super Dreadnought", was laid down on October 21st, 1912 and launched on October 16th, 1913. She was formally commissioned on December 22nd, 1914 - this just as World War had come to Europe in August of that year and the battlefields of France bogged down into trench warfare. The naval side of the conflict would become just as important as the trench warfare and air war that ensued - epitomized by the classic Battle of Jutland, the largest naval action of the entire war (and the only to include numerous battleships on both sides).
Advertisements

As built, Queen Elizabeth displaced 31,100 tons and featured a length of 646 feet with a beam of 90.5 feet and draught of 33.9 feet. Her total crew complement numbered between 950 and 1,300 depending on peacetime/wartime requirements. Her profile included four main gun turrets (two forward, two aft), twin smoke funnels, and twin masts while her general shape was that of the classic steel warship of the period.

HMS Queen Elizabeth offered a naval "first" when introduced with her oil-burning boiler propulsion system (as opposed to coal-fired). Some questioned the design direction due to the reliance on such a volatile resource, typically pulled from faraway lands like Persia, as opposed to the readily-available, tried-and-proven, method of coal-fired boilers. Nevertheless, HMS Queen Elizabeth was given 24 x boilers which were mated to 4 x direct drive turbines managing 4 x shafts at 75,000 shaft horsepower. Coupled with her streamlined hull, the vessel was a fast warship able to make headway at 24 knots. Her range reached out to 8,600 nautical miles when cruising at 12.5 knots. She carried 3,300 tons of oil.

Her armament, as built, included 8 x 15" BL Mk I main guns set across four primary turrets with two guns to a turret. Turrets One and Two sat ahead of the bridge superstructure with turrets Three and Four aft of the aft mast, overlooking the stern. This allowed for attack angles both forward and behind the vessel with at least two turrets as well as a full broadside bringing all four turrets in play. The main guns were supplemented by 16 x 6" BL Mk XII guns for additional firepower support. There was also 2 x 3" QF 20 cwt Anti-Aircraft (AA) guns for local defense, 4 x 3-pdr salute cannons, and 4 x 21" (530mm) torpedo tubes - the latter submerged under the waterline.

HMS Queen Elizabeth was quickly placed into active wartime service during January of 1915. Due to the Ottoman Empire's (Turkey) entry into the war on the side of the Central Powers (Germany, Austria-Hungary), and at the behest of the Russians to provide another front in the East, HMS Queen Elizabeth joined a fleet of older warships in their cruise to the Dardanelles from the Mediterranean waters where she had trialed. The Battle of the Dardenelles was part of an over-lying campaign enacted on February 19th into March 18th, 1915 and saw a combined British-French force were sent to overtake Ottoman defensive forts along the mined waterway leading to the Sea of Marmara and, ultimately, Istanbul (Constantinople). Along with the forts, the force would have to contend with mines, torpedo boats, and mobile offshore guns fielded by the Ottomans.

The action proved a failure with seven Allied vessels sunk, four damaged, and 700 killed in the fighting. The Ottomans lost a pair of predreadnoughts in the clashes as well as a minelayer and counted 40 persons killed and a further 78 wounded. The operation went down in naval history as an Ottoman victory and forced the ill-fated invasion of Gallipoli (April 25, 1915 - January 9th, 1916) - an Allied disaster in its own right. During the Gallipoli Campaign, HMS Queen Elizabeth served as flagship for General Sir Ian Hamilton who presided over the Mediterranean Expeditionary Force (MEF).

Her availability during the famous Battle of Jutland (May 31st - June 1st, 1916) was naught as she lay in harbor undergoing a wartime refit. During 1915-1916 she lost four of 6" guns at the stern and these were offset by gaining 2 x 6" guns at the forecastle deck. Additional work in 1916 saw her lose the forecastle deck guns. Jutland proved tactically indecisive with warship losses and crew deaths on both sides but nonetheless allowed the British Navy to keep control of North Sea waterways, further hampering the German war effort.

With the internal political and societal pressures on Germany as well as the external military pressure on the nation and its allies, the war ended in an Armistice during November 1918. HMS Queen Elizabeth soldiered on into the interwar years where she served as flagship for the Atlantic Fleet. She served in this capacity from 1919 into 1924 and was then granted commission as flagship of the Mediterranean Fleet from 1924 to 1929. During the span of 1926 to 1927, her hull was widened to include torpedo bulges and her smoke funnels were now "trunked". She also gained 4 x 4" guns and a revised foremast. With the work done, she returned for service with the Mediterranean Fleet during 1927 and then rejoined the Atlantic fleet in 1929. Back in Mediterranean waters by late 1929, she operated there until 1937 - the lead up to World War 2 (1939-1945).

From 1937 to 1941, HMS Queen Elizabeth underwent a major rebuild. Her original bridge arrangement was replaced by a more modern "tower" bridge design which changed her profile some. She lost all of her original 6" support guns and replaced these with 20 x 4.5" QF Dual-Purpose (DP) guns in ten twin-gunned turrets. Her propulsion system was all replaced as well and deck armor improved. The armament was addressed with a new Fire-Control System (FCS) and armor protection added. One key installation were catapult systems for the launching of floatplane spotter aircraft - offering the vessel an important over-the-horizon vantage point.

By the time HMS Queen Elizabeth put out to sea again, Britain was fully enveloped in another World War in Europe. She was ordered to the Mediterranean to support ongoing British operations there and served in the Allied evacuation of the island of Crete during June 1941. In December of that year, still operating in Mediterranean waters and berthed at Alexandria, Egypt, HMS Queen Elizabeth and HMS Valiant were attacked by Italian special forces using Maiale ("Pig") midget submarines, killing nine and sending the vessels to rest on the shallow harbor floor. This left no true Allied battleships operational in the Mediterranean which proved great cause for concern. The shallow harbor floor did provide the needed perception that HMS Queen Elizabeth still retained her fighting form as temporary repairs were being carried out in secret.

One viable for ocean-going travel in June of 1942, Queen Elizabeth was sent to Norfolk, USA to complete her full schedule of repairs and she arrived there for September. The lengthy work was completed by the Americans in June of 1943 and the vessel was sent back to home waters for July through to the end of 1944. For January 1945, she joined up with the Eastern Fleet and supported Allied actions in the Pacific Theater, providing air defense and offshore shelling of key enemy positions - particularly across Indonesia. She ended her wartime exploits in the Indian Ocean until set in reserve status during August of 1945. The war was over in September which led to her being struck from the Naval Register a few years later on July 7th, 1948 and sold to Arnott Young to be scrapped in Scotland for 1949.
Advertisements 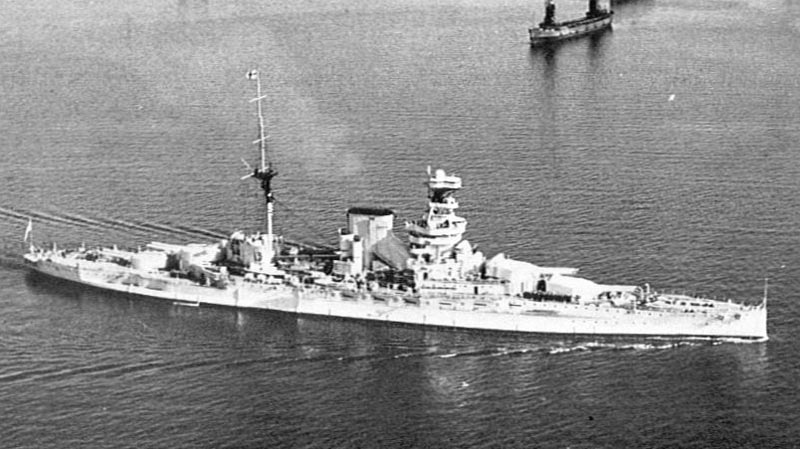