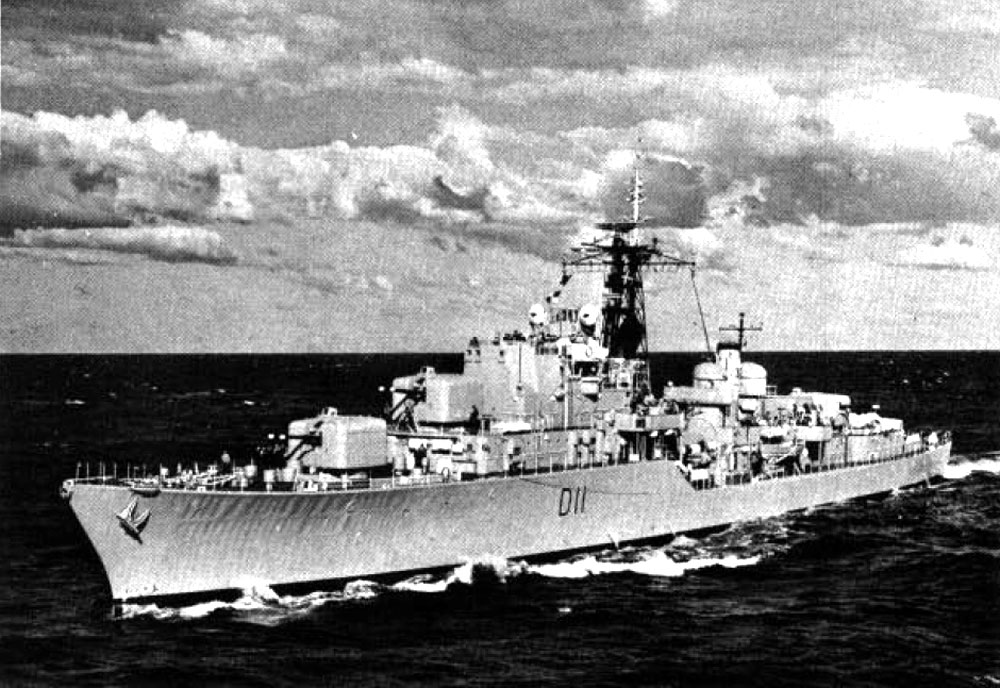 HMAS Vampire D11 destroyer served the Australian Navy from 1959 to 1986 and lives on as a floating museum ship.

Authored By: Staff Writer | Last Edited: 01/08/2021 | Content ©www.MilitaryFactory.com; the following text is exclusive to this site.
Daring-class destroyers were a British naval initiative of the Cold War period (1947-1991) immediately following the close of World War 2 (1939-1945) and built through eleven total units, these destined to serve with the British Royal Navy (8 units) and the Royal Australian Navy (3 units). A total of twenty were initially planned with sixteen set to be delivered to the former and four to the latter. The class succeeded the aging wartime Battle-class types and were themselves succeeded by the County-class in British service and the Perth-class in RAN service.

The Daring-class was constructed from 1949 until 1949 and in commissioned service from 1952 to 2007. They represented the dimensionally largest destroyers ever built for either service when they were brought online. One of the warships falling to the RAN was HMAS Vampire (D11), laid down on July 1st, 1953 by Cockatoo Island Dockyard. The vessel was launched on October 27th, 1956 and formally commissioned into service with the RAN on June 23rd, 1959. She fought under the motto of "Audeamus" (translating to "Let Us Be Daring") and was known by several nicknames alluding to her formal name - "Bat", "Batty", and "The Bat Mobile".

Vampire displaced 2,800 tons under standard loads and this ballooned to 3,560 tons under full operating loads. Her dimensions included a running length of 388.11 feet with a beam measuring 42.11.4 feet and a draught down to 42.11 feet. Power was from 2 x Foster Wheeler boiler units feeding English Electric (EE) geared-steam turbines developing 54,000 horsepower to drive 2 x Shafts under stern. The warship could dash at speeds exceeding 30 knots under ideal conditions and ranged out to 3,700 nautical miles (4,300 miles).

Aboard was a crew complement of 320 encompassing twenty officer-level personnel with some 300 enlisted.

The ship's profile was consistent with post-war design of the period; the turreted main guns were stepped ahead of the bridgeworks and an exposed main mast followed. The smoke stacks were contained near midships with a second hull superstructure integrating the secondary mast. The hull line angled down aft of the forecastle and continued unbroken up to the stern.

The warship was outfitted with the requisite systems of the day including various sonar installations, gunfire directors, air-search radar, and surface-search radar.

All told, the Daring-design was effective and capable of tangling with most any at-sea threat.

For her time at sea, Vampire sortied across the Southeast Asia Theater and served under the banner of the Far East Strategic Reserve for some of her career. She participated in the Indonesia-Malaysia Confrontation (1963-1966) as an ally to Malaysia and supported allied actions during the Vietnam War (1955-1975), particularly in the escort/deterrence role. She provided security during the Royal Family's visit to Australia in 1977 and, in 1980, she was relegated to training ship status - completing her career on August 13th, 1986 when she was formally decommissioned after nearly 30 years of faithful service.

The Australian National Maritime Museum was gifted the warship and displayed from 1990 onwards, the museum coming into full ownership of the warship in 1997. In 2009, she was retroactively honored for her exploits of 1964-1966. Today she remains a preserved museum ship alongside fellow players HMAS Advanced and HMAS Onslow.