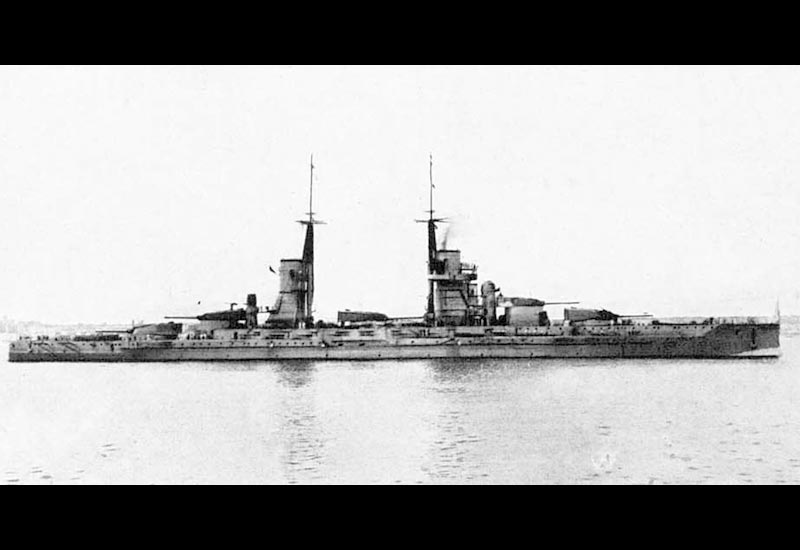 Authored By: Staff Writer | Last Edited: 05/04/2021 | Content ©www.MilitaryFactory.com; the following text is exclusive to this site.
The Andrea Doria was one of two battleships in the Andrea Doria-class serving the Italian Navy in the 20th century. Construction was handled between the shipyards of La Spezia and Castellammare from 1912 onwards until the vessels were launched in 1915 and made ready for operational service by 1916. Based on the Conte di Cavour battleship design, the Andrea Doria arrived too late to see any combat action in World War 1 war and would have to wait for history's second greatest global conflict before she could fire her guns in anger.

The Andrea Doria's profile was dominated by her twin mast and funnels, opening up a space amidships for a primary turret emplacement. In her early form, the vessel featured 13 x 12" main guns held in five total turrets, three with triple barrels and two with dual barrels. This main armament was supplemented by 16 x 6" guns, 13 x 3" guns and 3 x 135mm torpedo tubes for considerable offensive firepower. Defensive armament consisted of 6 x 76mm guns for anti-aircraft duty. Power was initially supplied by a steam turbine with twenty boilers feeding four shafts at 30,000 shaft horsepower. After modernization, this turned into a steam turbine system with eight Yarrow-type boilers feeding a pair of shafts but at a great 75,000 shaft horsepower load. Crew complement was 1,233 sailors.

While missing out on combat altogether in World War 1, Andrea Doria did fire her guns after the war in 1919 (World War concluded in 1918), where she served with the Allied Intervention Force on the Black Sea during the Russian Civil War as an escort ship. Beyond that, the vessel led a relatively quiet life on the seas until the build up to World War 2. She saw a major refit from 1937 through 1940, as additional armor was added to critical areas and turret facings along with a change in armament. This later version of the vessel featured 10 x 12.6" main guns in two triple and two double turret emplacements. This was supplemented by 12 x 5.3" guns, 10 x 3.5" anti-aircraft guns, 13 x 76mm guns, 15 x 37mm anti-aircraft cannons and 16 x 20mm anti-aircraft cannons (note removal of torpedo tubes). This, in essence, made the Andrea Doria a more powerful vessel in the latter part her of her career than when she was first introduced. Crew complement increased in this new form to 1,485 sailors. Her machinery changed as well and she received a boost to her top speed thanks to redesigned twin screws over her original quadruple design and new boiler systems powering her steam turbine.

During World War 2, the Andrea Doria took part in the convoy battles across Atlantic and Mediterranean waters, seeing notable action in the First Battle of Sirte. As history would show, her battle days were now numbered and the nation of Italy was teetering evermore on the verge of capitulation. The Andrea Doria was placed in reserve by the end of 1942 and she was eventually surrendered to British forces near Malta that same year. She was interned in 1943 following Italy's formal defeat in late 1943.

The Andrea Doria-class was superseded by the Littorio-class of warships in World War 2.