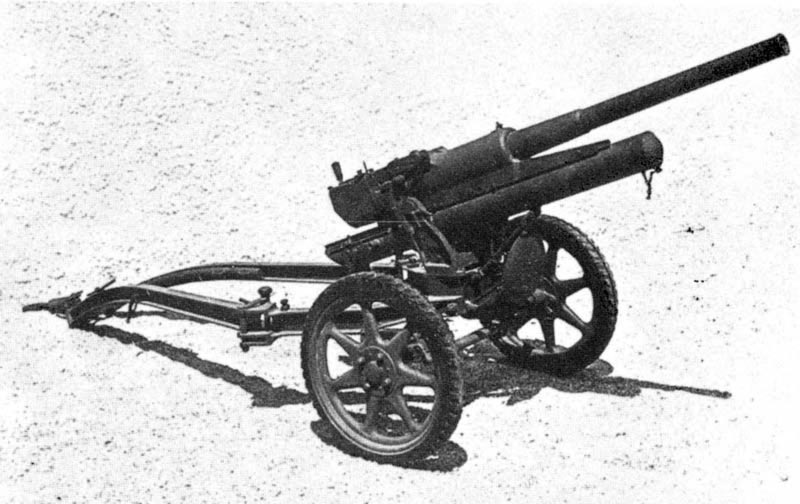 A serviceable Anti-Tank weapon at the start of World War 2, the Austrian Bohler 47mm gun found renewed life as a close support weapon before the end.

Bohler of Austria designed, developed and produced what would become its "4.7cm Bohler M32", a 47mm artillery piece appearing in 1932. The gun was originally intended as an Anti-Tank (AT) measure but, once armor protection of enemy tanks increased in the early stages of World War 2 (1939-1945), the gun was reborn as an infantry close-support weapon. A two-wheeled carriage allowed for towing of the system and the mounting hardware provided -15 to +56 elevation with 62-degrees of traverse. Range was out to 7,000 meters. As was the case with other AT guns of the period, the Bohler gun was designed to fire two distinct projectiles - Armor-Piercing (AP) and High-Explosive (HE) and Line-of-Sight (LoS) was required.

The Italians were key customers of the Bohler weapon and purchased local production rights to it (Cannone da 47/32). As such, the 47mm armament made up the main guns of various Italian armored vehicles including the M13/40 Medium Tank, the AB41 armored car and the Semovente 47/32 series Self-Propelled Gun (SPG) platform. Despite its relatively compact dimensions, the artillery piece proved difficult to tow and offered no protection for its crew but its availability meant that the guns were still frontline weapons for the Italian Army into 1943 - by this time, the 47mm projectile as an armor-defeating solution had seen its best days. For the early campaigns, however, the weapon provided comparable tank-killing service to the German PaK 36 and British 2-pounder weapons.

Beyond its acceptance into the Austrian and Italian armies, the Bohler 47mm gun was adopted in China, Estonia, Finland, Latvia, Netherlands, Romania, and Switzerland. The Soviets captured a stock of the guns from Latvia and the Germans from their exploits in Austria, the Netherlands and the Soviet Union. In the German Army inventory they were known as "4.7cm PaK 187(h)" (Dutch models) and "4.7cm PaK 196(r)" (Soviet models). As some German forms were inevitably passed on to the Italians to help reinforce their stock, the guns were reconstituted following the Italian surrender of September 1943. This then gave rise to the "4.7cm PaK 177(i)" designation and saw service with both Germany and Croatia in the years following.

Powerplant: None. This is a towed artillery piece.
(Showcased performance specifications pertain to the base 4.7cm Bohler M32 production variant. Compare this entry against any other in our database)
1 x 47mm gun barrel.

(Not all weapon types may be represented in the showcase above)
Dependent upon ammunition carrier; AP and HE/HEAT round compatibility.