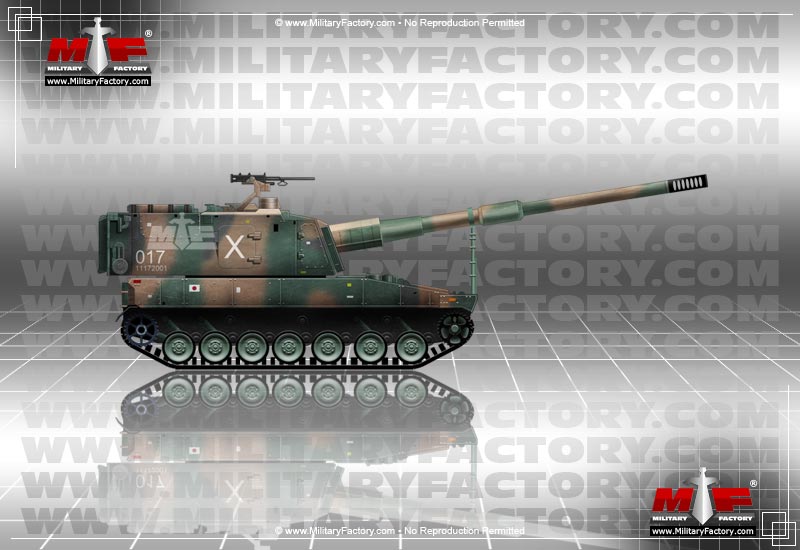 The Japanese Army Type 99 155mm Self-Propelled Howitzer vehicle is based on the chassis of the Type 89 Infantry Fighting Vehicle.

Authored By: Staff Writer | Last Edited: 04/04/2021 | Content ©www.MilitaryFactory.com | The following text is exclusive to this site.
The ongoing modernization of the Japanese Ground Self-Defense Force (JGSDF) has included the introduction of an all-new Self-Propelled Howitzer (SPH) system in the "Type 99".The vehicle was used to succeed the old stock of Type 75 SPH systems adopted in 1975 (201 built). Mitsubishi Heavy Industries (hull) and Japan Steel Works (main gun) have collaborated in producing the Type 99 to which the effort has yielded 111 total vehicles heading into 2015.

As its core, the Type 99 follows conventional design wisdom as SPH systems go. It is a 40 ton vehicle with a crew of four - the commander, gunner, and loader housed in the boxy turret structure and the driver in the front-right of the hull with the powerpack to his left. The 155mm L52 main gun (by Japan Steel Works) unit sits in the frontal panel of the turret and is capped by a multi-baffled muzzle brake. The turret gives the gun an elevation span and 360-degree traversal to engage at most any indirect fire angle without having to turn the hull around to meet the target/target area. A rate-of-fire of six rounds per minute can be achieved for a limited duration (resupply available through the Type 99 ammunition carrier). A 12.7mm M2HB heavy machine gun is carried on the turret roof for local defense as are smoke grenade dischargers. The hull incorporates aluminum alloy armor protection which protects against small arms fire and artillery spray and is based on that of the Mitsubishi Type 89 Infantry Fighting Vehicle (IFV) having entered service in 1989 (120 built).

Power to the vehicle is served through a Mitsubishi 6SY31WA 6-cylinder diesel-fueled engine of 600 horsepower output. This provides the Type 99 with a road speed maximum of 50 kph with an operational road range out to 300 kilometers. Cross-country travel is aided by a torsion bar suspension system. The running gear includes a typical track-over-wheel approach in which seven double-tired road wheels are featured to each hull side. The drive sprocket is at front with the track idler at rear.

Track-and-Wheel Arrangement Vehicle utilizes a track-and-wheel arrangement to provide enhanced cross-country travel capability.
Primary Turret A modern tank quality, this vehicle sports its main armament in a single turret.
Traversable Main Armament Armament is situated in a traversing component, allowing for all-around engagement of enemy threats.
Recoil Enhancement Main weapon has an integral recoil mechanism, allowing the system to remain trained-on-target after firing.
Firing On-the-Move A modern quality, onboard systems provide accuracy to primary armament allowing for firing on-the-move.
NBC Protection Crew is provided (either as standard or optional) protection against Nuclear-Biological-Chemical agents for enhanced survivability in contaminated zones.
Smoke Screening Vehicle has capability to self-generate a smoke screen, either through launched grenades or built-in engine funtion (raw fuel injection).
Nightvision Crew has access to night-vision equipment, allowing for low-light or night time operations.
Anti-Aircraft / Air-Defense Capable System is given an anti-aircraft defense component to protect itself from low-flying aerial threats at range.
In-Direct Fire Capable This system's capability is such that it can engage targets / target areas without Line-of-Sight attained.

Type 99 - Base Series Designation
Type 99 Resupply Vehicle - Ammunition Carrier based on the Type 99 chassis and hull.