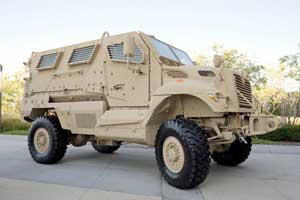 The International Truck "MaxxPro" by Navistar Defense is a Mine-Resistant Ambush Protected (MRAP) vehicle classified as an Armored Fighting Vehicle (AFV) and used by a number of armed forces around the globe. The purpose of MRAPs is to protect the crew against not only small arms fire and rocket propelled grenades (RPGs) but the much-feared Improvised Explosive Device (IED). The term "IED" was first developed by the British Army in the 1970s when the Provisional Irish Republican Army (IRA), a gorilla force, used make-shift bombs consisting of agricultural fertilizer and fuel to make booby-trap explosives for use against traditional ground forces of the United Kingdom.

In Somalia, and later in Iraq and Afghanistan, American troops were taking considerable causalities during patrols in their lightly armored HUMVEE vehicles when hit by a detonated IED. Many in-the-field modifications were subsequently made personally by crews when official "up-armoring" programs proved too slow in developing along the traditional DoD route. Crews raided vehicle junk yards for metals and even asked their state-side relatives to send bullet proof vests over mail. The IEDs evolved to become particularly sophisticated even against the later, heavier "up-armored" HUMVEEs that these vehicles no longer provided enough baseline protection for their occupants.

The MaxxPro MRAP became one in the now-long line of armored vehicles procured in number by the US military. Designed by the American automotive firm of International Truck (Navistar International) and the Israeli concern of Plasan, the MaxxPro was intentionally developed to stand up to small arms fire and extend coverage to mine blasts, IED detonations and Nuclear, Biological and Chemical (NBC) environments that threaten or otherwise injure the safety of the vehicle crew. The first vehicles were delivered to the Army and Marine Corps for testing in 2007 in several variants which allowed interchangeability of parts and armor customization kits to modify the level of protection available as the mission required. To date (2013), over 9, 000 of these vehicles have been procured and several thousands are currently in service with the US military and a number of allied nations. These armored vehicles are used in all war zones while replacing the aging HUMVEE as the standard US Army wheeled vehicle. The HUMVEE is now slated for use in non-combat areas - mostly stationed across the United States and in Europe.

The basic MaxxPro is classified as a "Category 1" MRAP vehicle and is equipped with a crew pod that showcases a "V-shaped" hull which does not extend to the engine bay. The specially-designed V-shaped hull is intended to deflect blasts from under the vehicle away from the pod compartment - a design perfected by the South African military and its defense forces during their bloody bush war campaigns. Armor used on the MaxxPro was designed and manufactured by Plasan who has been producing armored vehicles since 1985. The hull does not rely on welded steel panels but instead uses bolts to allow for quick repairs and even quicker up-armoring in-the-field. The steel armor coverage affords protection against direct rifle fire, RPG grenades and IED's. The vehicle makes use of International WorkStar 7000 truck chassis while being powered by the International MaxxForce D9.3I6 turbo inter-cooled, direct electronic injection, four-stroke diesel-fueled engine developing 330 horsepower. Automotive parts are commercially available. The engine is mated to an Allison 3000 five-speed automatic transmission with a two-speed transfer case and semi-elliptical leaf spring suspension. The wheel base measures 153" and the ground clearance to the center of the vehicle is 14" allowing a fording depth of 36". Curb weight is 37,850lb (17,168kg).

For self-defense, the MaxxPro can feature a roof-mounted, shielded traversing machine gun turret able to fit a 7.62mm medium or 12.7mm heavy class machine gun. During night actions, "blackout" lights are added along with a Diamond Logic electrical system. A back-up electrical system uses four 12-volt batteries and a 400 amps alternator. Full air brakes with ABS are active when in motion and, when parked, air-activated, hand-operated brakes apply to the rear axle. The wheel brand of choice is the Hutchinson Runflat mounted with single Michelin 395/85R20 XZL all-around tires.

The MaxxPro Plus of 2008 is a dual-rear-wheeled version of the MaxxPro designed to counter greater rear-set loads. There is also a dedicated armored ambulance variant of this model. The MaxxPro Dash is a more compact MaxxPro design with limited dimensions and lightweight specifications - these debuted in late-2008 with the USMC. The MaxxPro XL is a "Category 2" MRAP which is dimensionally larger and heavier than the original basic form.

March 2013 - On March 3rd, it was announced that Department of Homeland Security (DHS) purchased 2,717 MaxxPro vehicles with a new rolling chassis. This chassis enhancement included the addition of the DXM independent suspension, a MaxxForce 9.3 engine and a 570 amp alternator and driveline. The work was completed in May 2012. These vehicles, purchased for use on American streets, are also designed to withstand IEDs and mine blasts and come complete with gun ports for occupants. The vehicles are slated for Police/rescue service.

Personal crew weapons can be utilized when vehicle is equipped with firing ports.

(Not all weapon types may be represented in the showcase above)
Dependent upon armament fitting. 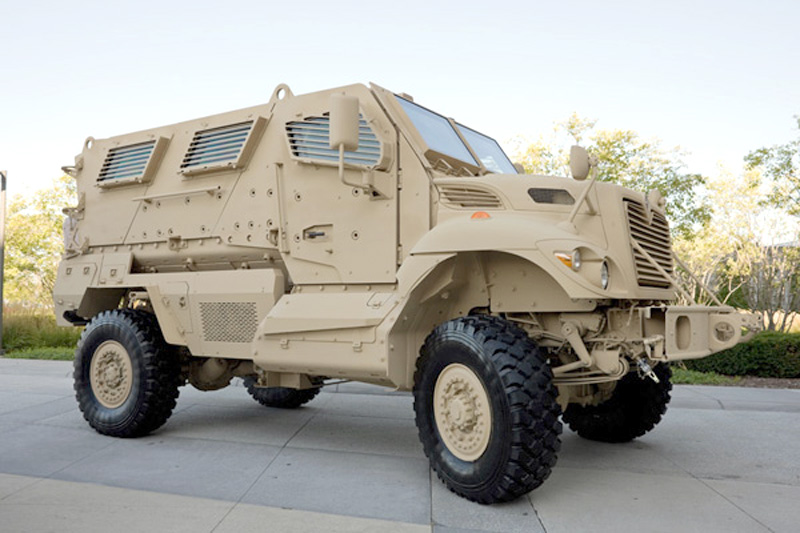