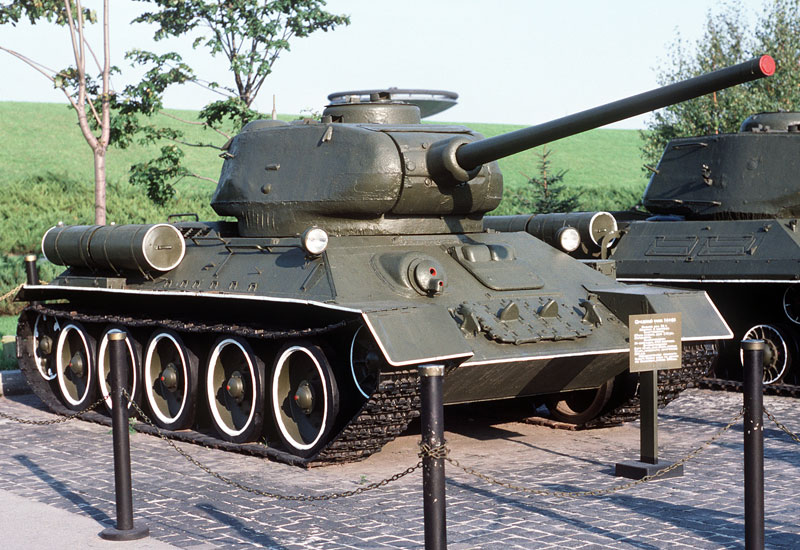 Front right side view of a T-34/85 medium tank on display; color

The T-34/85 is nothing more than an up-gunned version of the base T-34 medium tank design of World War 2.

Authored By: Staff Writer | Last Edited: 02/04/2019 | Content ©www.MilitaryFactory.com | The following text is exclusive to this site.
The T-34/85 was essentially categorized as an "up-gunned" version of the successful base T-34 medium tank designed and built in large numbers by the Soviet Union during World War 2. The Germans had invaded the Soviet Union in June of 1941 and the Panzer III and Panzer IV series had formed the backbone of their armored assaults up to now. However, things quickly changed when the Soviets unleashed their heavily armored and armed T-34 medium tanks alongside their KV-1 and KV-2 series heavy tanks.

The base T-34 mounted a capable 76mm main gun which proved effective against the Panzer III and Panzer IV series tanks fielded by the Germans in bulk up to this point in the war. In response, the Germans delivered their Panther and Tiger series tanks featuring bigger guns and more armor. The T-34/85, therefore, came at a time when Soviet authorities were looking for a bigger tank gun option to contend with the German 75mm and 88mm offerings - two proven tank killers in their own right. The T34/85 also featured an entirely new five-speed transmission, a new three-man turret design to house an additional crewmember, electric turret traversal to speed up gunnery response and a useful cupola for the tank commander. These additions - at the cost of a little bit of speed - benefitted an already excellent base design, particularly since the T-34 was most effective when fielded in massed numbers against German forces.

Initial designs of the T-34/85 called for a heavy-penetrating main gun platform with sufficient mobility with good armor protection. An 85mm anti-aircraft gun was already in trials on the tank chassis of the KV-85 heavy tank at the time so the choice to field this same armament in a new T-34 was logical. The new T-34/85 would also feature two DT general purpose machine guns with limited traverse - one fitted coaxially in the turret and the other embedded in the front right hull (bow) portion of the tank. The turret itself was new to the T-34 line, it being developed from the one used in the KV-85. The T-34 chassis, in general, proved highly adaptable and ideal for other production variants that turned the medium tank into improvised dedicated tank destroyers and anti-mine vehicles among other forms. The vehicle was crewed by five personnel made up of the driver, commander, loader, gunner and radio operator, the latter doubling as the bow machine gunner. Operational range could be extended through the use of external fuel drums. Power was derived from a single W-2-34 V12 diesel engine outputting 500 horsepower. Top speed was listed at 34 miles per hour and the vehicle's weight reported at 32 tons.
The T-34-85 was first delivered to Soviet tank crews - namely guard units - in late 1943 and early 1944 through a short initial production batch run. Early forms fielded the D-5T 85mm gun system and were known under the designation of "Model 1943". A follow-up version was released to production soon following and was known simply as the "Model 1944". This became the definitive T34-85 mount and were fitted with the ZiS-S-53 series 85mm main gun - an armament that was simpler to mass produce for the Soviet war effort. The radio suite was also relocated from the bow to the turret in these models and a new gunner's sighting device was installed. Some 12,000 T-34/85 examples were delivered by the end of the war in Europe in May of 1945 and captured samples were pressed into service by the desperate German Army.

Even after World War 2, the T-34/85 existed in greater numbers and delivered to some Soviet-friendly nations - North Korea and China being key recipients considering the upcoming Korean War (1950-1953). North Korea itself fielded about 150 of the T-34/85 variant at the beginning of the Korean War and several T-34/85s are still believed to be in operational frontline service even today, a testament to both the successful design of the T-34 as a whole and the lack of forward-thinking on the part of the North Koreans.

In all, over 55,000 T-34/85's were built by the end of production and a bulk of that - roughly 40,000 - were produced during the war years alone. Nevertheless, the tank system proved to be the most successful Soviet tank design up to that time, setting the design stage for Cold War tank influence that has lasted up to today. The T-34, at its core, was efficient to produce and easy to maintain once in the field. Her use of sloped armor, large road wheels and a powerful main gun proved to be a collectively efficient end-product for decades - her value proven by her actions in World War 2.

Major modernization programs followed the T34/85 during the Cold War years, these taking place in 1960 and 1969. Regardless of changes, many retained their general base appearance and were only discernable to experts of the T-34 lineage. Czechoslovakia mass-produced the T-34/85 and distributed them widely across the Soviet sphere.