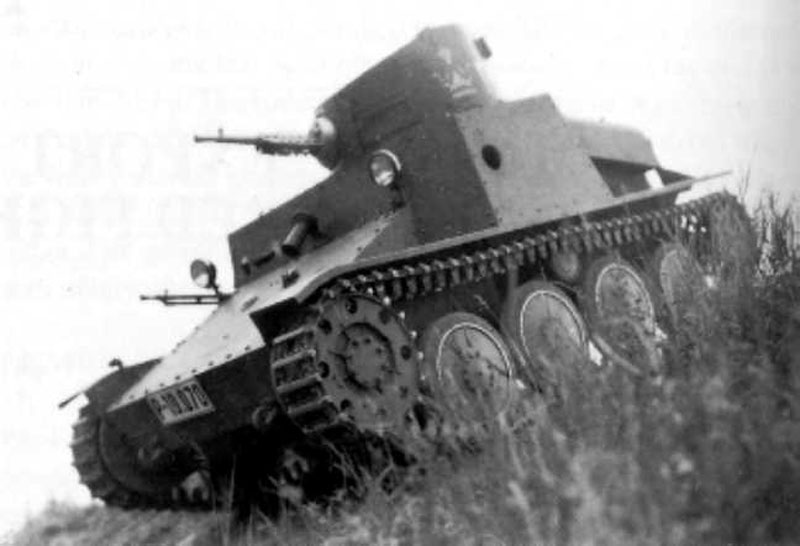 Front left side view of the AH-IV Tankette on the move; note machine gun armament
2 / 3 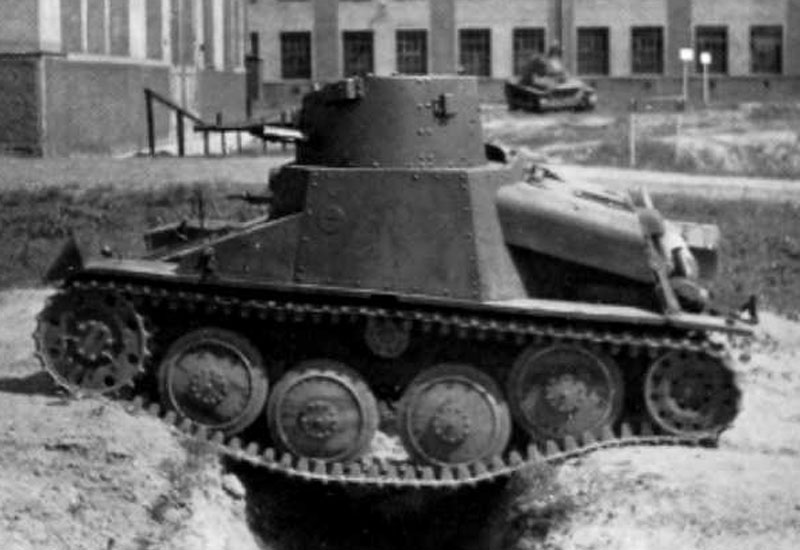 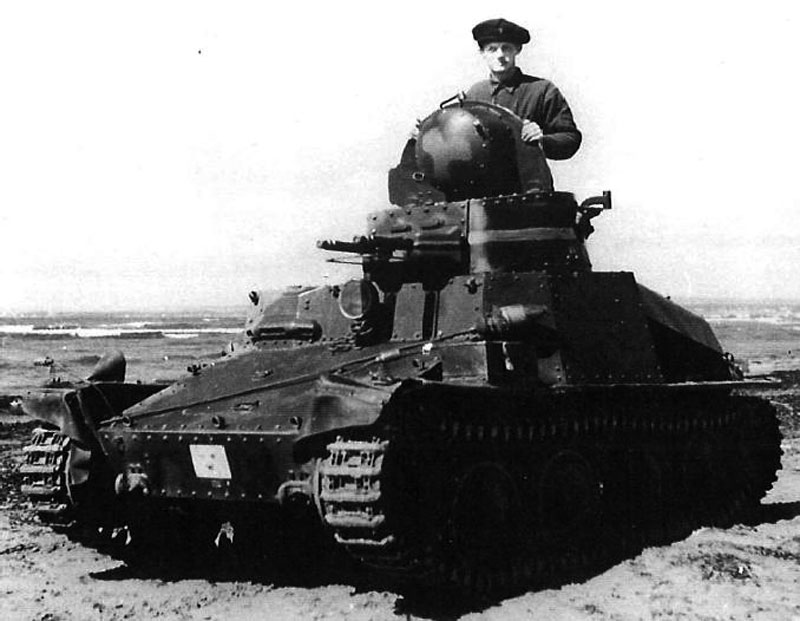 Front left side view of the Swedish m/37 Tankette based on the AH-IV; note twin machine gun armament in turret
❮ ❯

The AH-IV Tankette was of Czech origins but saw operational service in foreign hands.

Authored By: Staff Writer | Last Edited: 07/01/2017 | Content ©www.MilitaryFactory.com; the following text is exclusive to this site.
The AH-IV was an export tankette design of Czech origins that appeared in 1936. Agile and fast, the machine gun-armed combat system was built in limited numbers and all ended up with export parties that included Ethiopia (as the AH-IV-Hb), Iran, Romania (as the AH-IV-R) and Sweden (as the Strv m/37). The diminutive design went on to see combat actions in World War 2, the Eritrean War of Independence (1961-1991), the Ethiopian Civil War (1974-1991), the Ogaden War (1977-1978) and the Ethiopian-Somali Border War (1982). Amazingly, the last AH-IV tankette was retired from operational service in the mid-1980s.

Tankettes were, as the name suggests, small combat tanks, designed to be much smaller than even the light-class series of tanks. Such tracked systems were useful for their speed, relative armor protection, cross-country performance and available armament allowing even the smallest (and poorest) of nations to field an economical mechanized force of somewhat modern consideration. Tankettes served up until World War 2 to which medium-, heavy- and super-tank designs began to take center stage. After the war, the tankette classification was more or less discontinued as were medium-, heavy- and super-heavy tank classes in lieu of the "Main Battle Tank" (the light-class tank still remains to this day). From a military standpoint, the tankette could be used as a fast reconnaissance vehicle or for policing duties thanks to its light design and choice repeating armament. Of course, when forced into direct combat with other "true" tanks or anti-tank weapons and mines, the tankette could suffer greatly.
While similar in scope to the Tancik vz. 33 Tankette before it (appearing in 1934), the AH-IV was designed with a 360-traversing turret for the gunner as opposed to a forward-facing machine gun in a flexible mount. This provided for a more viable tactical machine. Like the Tancik wz. 33, the AH-IV was crewed by two personnel made up of the driver and the commander/gunner. The driver was fitted in the front-left hull while the gunner was set to the left hand side in the offset turret fitted at the middle of the design. The commander also doubled as the gunner and ammunition handler in the turret. The turret sat atop a boxy hull superstructure with angled facings that allowed for the required room within the driving, fighting and engine compartments. Construction was primarily of riveted plates. Primary armament was a pair of 7.92mm heavy machine guns, one installed at the driver's position (ZB vz. 26 or ZB vz. 30 model) and the other installed in the turret (ZB vz. 35 or ZB vz. 37 model). Armor protection was 6mm to 12mm at various facings and overall weight of the tankette was 4.3 tons. As designed, the tankette featured a running length of 10 feet with a width of 5.7 feet and an overall height of 5.5 feet. Power was supplied by a single Praga RHP 6-cylinder, water-cooled engine of 55 horsepower fitted to a rear compartment in the hull. The running gear consisted of four road wheels to a track side with a single track return roller, the drive sprocket at the front and the track idler at the rear. Suspension was by leaf spring. The engine was mated to a Praga-Wilson 5-speed transmission system consisting of five forward and a single reverse gear. Top road speed was listed at 28 miles per hour with an operational range of 110 miles.

Design work on the AH-IV began in 1935 by Ceskomoravska Kolben-Danek (CKD) of Czechoslovakia and continued into 1937 to which four pilot vehicles were ultimately introduced. Production began in 1936 and ended in 1938 only to begin again in 1949 due to demand. This second outing lasted until 1950. Beyond the four prototypes, approximately 153 total AH-IV Tankettes were produced in whole, all by the Czech concern of CKD. All were shipped to foreign operators.

Iran received their initial (and first production batches of AH-IVs) tankettes in 1936. Their history appears to have been rather limited but the Iranians (political, military and even civilians) respected the type for what it was and what it offered their burgeoning army inventory. 50 AH-IV Tankettes stocked the inventories of the 1st and 2nd Infantry Divisions and saw operational service during World War 2. The Iranian government envisioned purchased of 100, 200 or 300 more tankettes but the requirements of war in Europe dispelled such hopes.

The Romanians took first deliveries of the AH-IV in 1937 though revised specifications delayed their initial entry into service. The Romanians even purchased license production rights to the tank type but delays (once again) ensured that the AH-IV would only ever be produced by CKD in its history. Romanian versions - designated as AH-IV-R - eventually saw combat action with the Axis powers along the Eastern Front - from the German invasion of the Soviet Union through Operation Barbarossa to the failed Vienna Offensive of 1945. AH-IVs also operated at Stalingrad.

Sweden undertook delivery of the AH-IV and designated them as Stridsvagn m/37 (Strv m/37). These variants were modified to an extent, given more powerful engines and improved armor protection to comply with the Swedish style of armored warfare of the time. Unlike original Czech AH-IV production models, however, the Swedish version did away with the driver's machine gun fitting and, instead, concentrated machine armament in the turret through 2 x 8mm Ksp m/36 Strv series machine guns. Swedish use of the tankette ended in 1953.

The Ethiopians received the AH-IV (as the AH-IV-Hb) in the post-war world, this coming in the middle of 1948 with formal service entry in 1950. Unlike the wartime versions, which utilized riveted construction, the Ethiopian models were of welded construction and operated with diesel-fueled engines of 65 horsepower. The AH-IV enjoyed its longest tenure in Ethiopian hands and saw combat as recently as the 1982 border war against Somalia. Their use was discontinued (possibly) in 1985.

(Not all weapon types may be represented in the showcase above)
3,700 x 7.92mm ammunition