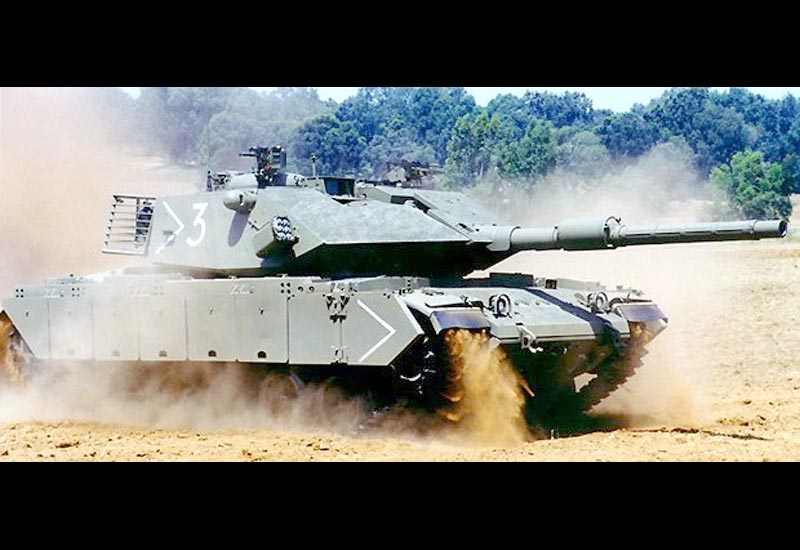 The Sabra Main Battle Tank is a highly-modified and upgraded version of the American M60 Patton series.

Authored By: Staff Writer | Last Edited: 02/24/2020 | Content ©www.MilitaryFactory.com | The following text is exclusive to this site.
The Israeli-developed "Sabra" is a highly modified form of the American M60 "Patton" tank complete with a revised turret, more potent armament, revised armor protection, reinforced chassis and improved battlefield capabilities. More specifically, the Sabra is based on the M60A3 production model though scarcely retains the form of the original American design with modifications completed by the Israeli Military Industries (IMI) concern. The Sabra was offered to the Turkish Army for upgrading their tank fleet and entered operational service in 2007. Overall, the Sabra is a very responsive contributor with a strong power-to-weight ratio, making it an agile battlefield system. Its various upgrades have extended the service life of the basic M60 and made for a more formidable killing machine.

Israeli long-maintained military ties with the United States and, throughout its decades of existence, purchased M48 and M60 Patton tanks in some numbers. Through battlefield experience, the Army eventually modified their tanks to fit more into Israeli armored doctrine and these developments began to take on their own forms that were highly Israeli in nature. One such program produced the Magach series of main battle tanks which constituted upgraded and much improved versions of existing M48 and M60 tanks. Within time, IMI began offering an upgraded form of the M60A3 as the Sabra to then-ally Turkey, who was seeking to upgrade their current tank crop.

Externally, the Sabra does not necessarily share the rather high profile of the American M60 and sports a turret appearance more akin to that of the Merkava Main Battle Tank series with its tapered edges and clean lines. Its highly-sloped surfaces provide for vastly improved point ballistics protection. As in the original American M60, the Sabra is crewed by four specialists including a driver, tank commander, gunner and loader. The latter three share space in the turret while the driver is seated in the front center hull. There are five rubber-tired road wheels to a track side with the drive sprocket at the rear and track idler at the front. The running gear has been considerably upgraded to contend with the increased weight and expected cross-country performance of the type. The engine is seated to a compartment at the rear of the hull. The engine consists of an American-based General Dynamics / Continental AVDS-1790-5A turbocharged V12 diesel-fueled engine delivering up to 900 horsepower running at 2,400rpm. This supplies the breed with a top speed of 30 miles per hour and an operational range equal to 280 miles. Suspension is by way of independent fittings with trailing arms.

Key to the upgrades in the Sabra series is the installation of the IMI-designed and developed 120mm MG253 series smoothbore main gun which is based on the same gun as found on the Merkava Mk III combat tank series. A fume extractor and thermal sleeve are clearly identifiable along the middle portion of the gun barrel and serve to preserve the gun from field wear while reducing barrel distortion from each consecutive fire. The 120mm system is a vast upgrade over the original M60 105mm fitting and presents a more formidable anti-armor foe. The main gun is cleared to fire NATO standard 120mm caliber projectiles and is tied to the digital "Knight" Fire Control System (FCS) developed by Elbit Systems and El-Op Industries. Some 42 projectiles of 120mm ammunition are carried aboard the tank and managed by the dedicated loader. Consistent with Israeli battlefield doctrine is the equipping of a 60mm field mortar for indirect fire support.
Anti-aircraft and anti-infantry defense is provided through 7.62mm light machine guns. One is fitted to the commander's hatch (cupola in Mk I, turret in Mk II with 12.7mm heavy machine gun, cupola in Mk III) while the other is at the loader's hatch. The third is a coaxial fitting alongside the main gun in the turret and managed by the gunner. Additional defense is afforded by two banks of four smoke grenade dischargers to either side of the main gun emplacement on the turret. These serve to cover the tank's movements, to an extent, by providing for a makeshift smokescreen for offensive and defensive actions. Crew survivability is improved by way of an integrated fire suppression system and active threat warning indicator. The original Sabra sported a modular passive armor design which can be upgraded to Explosive Reactive Armor (ERA) levels (Sabra Mk II) for improved protection of systems and crew alike.

The initial production form of the Sabra series became the Sabra Mk I which was based on an upgraded version of the preceding Israeli Magach 7C tank. The Magach series were nothing more than highly modified and upgraded M48 and M60 Patton tanks in Israeli service. Mk Is were clearly identified by their low-profile commander cupolas and were fitted with Allison CD850-6BX transmission systems tied to Continental AVDS-1790-5A diesel engines. The next major variant became the Sabra Mk II which featured provision for Explosive Reactive Armor and an M60 tank-style machine gun turret (12.7mm M85 heavy machine gun) at the commander's cupola. Additionally, the Mk II production model was also fitted with a German-designed, Turkish-produced 1,000 horsepower MTU 881 series turbocharged diesel-fueled engine. This engine is mated to a Renk transmission system. The final variant of the Sabra line is the Sabra Mk III which introduced a remote-controlled commander's machine gun emplacement as well as an armor configuration and track systems more akin to that of the Merkava Mk 4 series main battle tank. It also retains the German MTU engine installation of the Sabra Mk II and includes a Radar Warning Receiver (RWR) and Infrared (IR) warning system as standard.

Turkey maintains roughly 170 Sabras and these have since been upgraded to the Sabra Mk II standard and are known locally as the "M60T". The initial agreement between the two nations was signed in 2002 with deliveries of the first M60T forthcoming in 2005. The upgrade program (to Mk II standard) was undertaken from 2007 to 2009 and managed by the Turks from Israeli-supplied kits. Another upgraded M60 form - the "M60-2000" - was offered to Turkey by General Dynamics Land Systems. While Turkey has not moved on procurement of the type, Egypt has signed on to upgrade its aged M60 fleet to begin in 2011.