Authored By: Dan Alex | Last Edited: 05/10/2021 | Content ©www.MilitaryFactory.com | The following text is exclusive to this site. 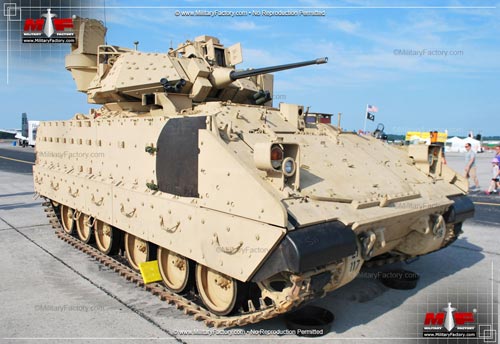 The M2 Bradley Infantry Fighting Vehicle (IFV) fulfilled a U.S. Army requirement that began in the 1960s calling for an amphibious mechanized direct-combat support vehicle to operate alongside the M113 Armored Personnel Carrier (APC). This need emerged directly from the arrival of the Soviet BMP series of amphibious vehicles appearing in 1966 which dutifully combined mobility, firepower and protection for a complete infantry squad. The result of the American initiative became the M2 "Bradley" remains a critical component of American land forces and is fully-air transportable by the Lockheed C-5 Galaxy (previously the Lockheed C-141 Starlifter). The M2 Bradley is named after World War 2-era General Omar Bradley.

The standard M2 Bradley features a crew of three - driver, commander and gunner - and can seat seven (originally six) combat-ready infantry under protection when serving in a frontline capacity. A wheel-and-track system allows for strong cross-country qualities and power to the drive is through the engine seated at the front-right of the hull (the driver and front-left). The Bradley is armed with the ATK Gun Systems Company M245 series 25mm cannon in a two-man powered turret (offset to the right from centerline) which also sports a 7.62mm coaxial machine gun as an anti-infantry defense measure. The 25mm gun can engage all manner of light-armored targets including enemy personnel carriers and infantry support vehicles as well as fortified positions (Gulf War experience proved the cannon capable of defeating MBT armor). Up to 900 projectiles of 25mm ammunition are carried as well as 2,200 x 7.62mm ammunition. The vehicle further supports the launching of the Hughes TOW Anti-Tank Guided Missile (ATGM) weapon which allows the Bradley to engage enemy heavier armor at range. Seven TOW missiles are carried aboard. Smoke grenade dischargers allow the crew to screen their own movements. Firing ports allow the occupants within to engage enemy infantry through their personal weapons as needed. NBC (Nuclear, Biological, Chemical) protection is standard. A powered door, lowered to create an integral ramp, is fitted to the rear of the hull for quick disembarking/embarking of passengers. A smaller rectangular door is used when safety is a greater priority. Bradley armor is made up of a aluminum and spaced laminate protection scheme which is reportedly sufficient against 30mm armor-piercing ammunition and rocket propelled grenades (when fielded with Explosive Reactive Armor (ERA) blocks). Side skirt armor protects the critical track components.

The M2 is powered by a Cummins VTA-903T 8-cylinder diesel-fueled engine developing 600 horsepower. The vehicle sits atop a torsion bar suspension system tied to six double-tired road wheels. The drive sprocket is at front with the track idler at rear. This arrangement allows for a maximum road speed of 40 miles per hour and an operational range of 300 miles. As an amphibious vehicle, the M2 can also traverse water sources (with some preparation) at approximately 5 miles per hour. However, changes to the armor scheme of the vehicle over the decades have removed the amphibious quality altogether. Overall weight is 30 tons (Short) with a running length of 6.5 meters, a width of 3.5 meters and a height of 3 meters.

From the 1972 XM723 prototype came the first of two M2 Bradley pilot vehicles which appeared in 1978 under the designation of "XM2" and were manufactured by FMC Corporation. Upon passing all requisite developmental phases, the line was officially adopted in 1980 as the "M2" and U.S. military service began shortly thereafter in 1981. The M2 Bradley has remained a U.S. Army stalwart since - fielded alongside the 1980s-era M1 Abrams Main Battle Tank (MBT) as a potent "One-Two" armored punch.
Advertisements

Original vehicles appeared under the base "M2" designation in the early 1980s. These were powered by a Cummins VT903 series engine mated to an HMPT-500 series transmission system. In 1986, there appeared an improved variant as the "M2A1" and this series brought about an improved NBC protection system, an additional passenger seat and support for the TOW II ATGM line. The M2A2 of 1988 was given an uprated Cummins engine of 600 horsepower and coupled to an HMPT-500-3 series transmission system. Armor protection was improved through support of ERA blocks while losing its side firing ports. This variant lost the additional seventh passenger seating area and became the M2 Bradley standard.

Following Operation Desert Storm, the M2A2 ODS ("Operation Desert Storm") variant was devised which improved navigation and accuracy as well as crew survivability and unit communications. The seventh passenger seat was reintroduced. In 2000, the M2A3 was made available and this mar introduced a fully digital operating environment for driver, commander and gunner. Armor was again addressed for the better.

The M2 line went on to see extensive combat service in the Persian Gulf War of 1991 and accounted for more enemy tanks destroyed than the M1/M1A1 MBTs also fielded. Conversely, of the twenty Bradley's lost in action during the war, some seventeen were lost in tragic "friendly-fire" incidents. Following these results, The U.S. Army worked to provide improved identification measures to curtail further issues in regards to friendly-fire losses.

The chassis of the M2 also makes up the major working components of the lethal M227 MLRS (Multiple Launch Rocket System), a highly-lethal mobile battlefield artillery piece. The M3 Bradley Cavalry Fighting Vehicle (CFV) is a direct-Bradley offspring slightly modified for the armed scout role, losing its six-passenger seating arrangement and carrying two scout personnel as well as increased communications equipment. All weapons are retained. The M4 C2V is a command vehicle while the M6 "Linebacker" is a self-propelled anti-aircraft vehicle based on the chassis of the M2 Bradley. A specialist engineering vehicle is also noted.

Some 4,641 Bradley's have since been produced with U.S. Middle Eastern ally Saudi Arabia receiving no fewer than 400 of that total. Operators include only the United States of America and allied Saudi Arabia though a potential operator remains the rebuilding Iraqi Army for as many as 200 vehicles.
Advertisements 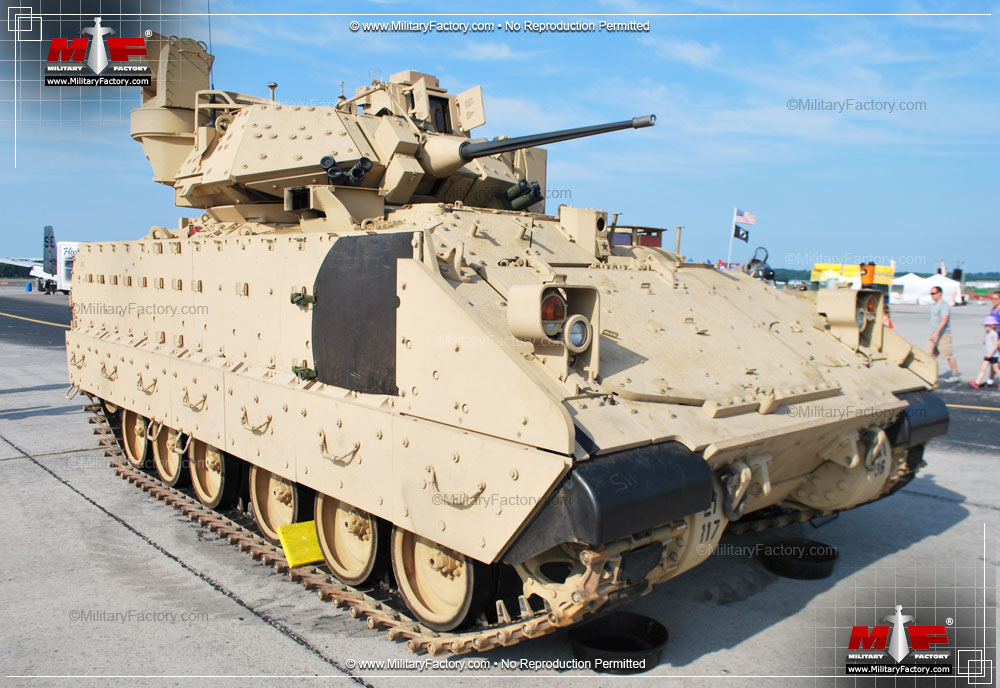 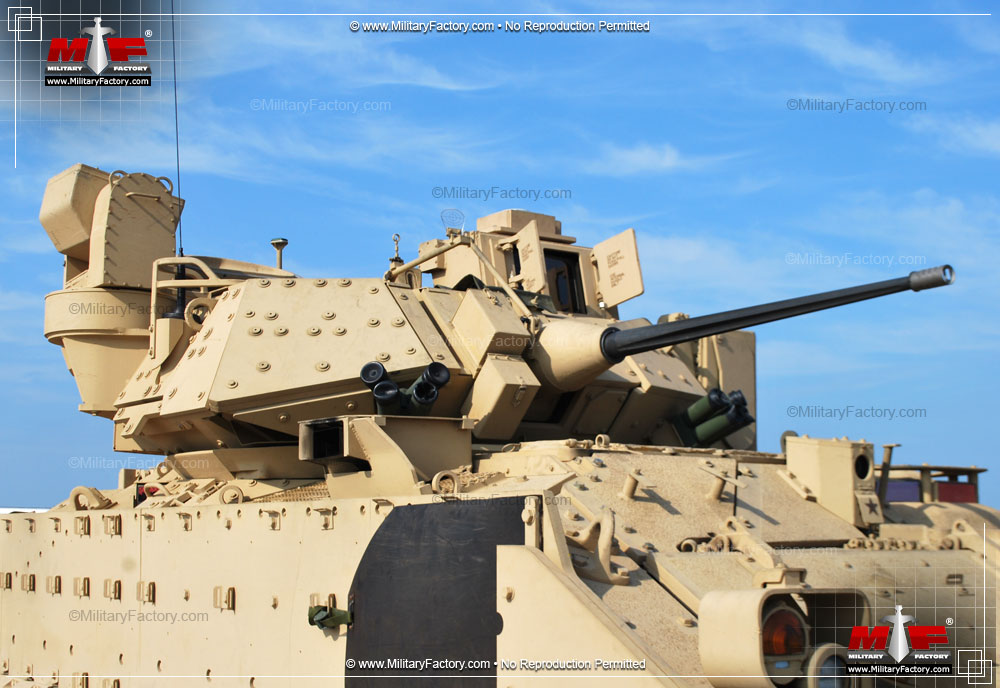 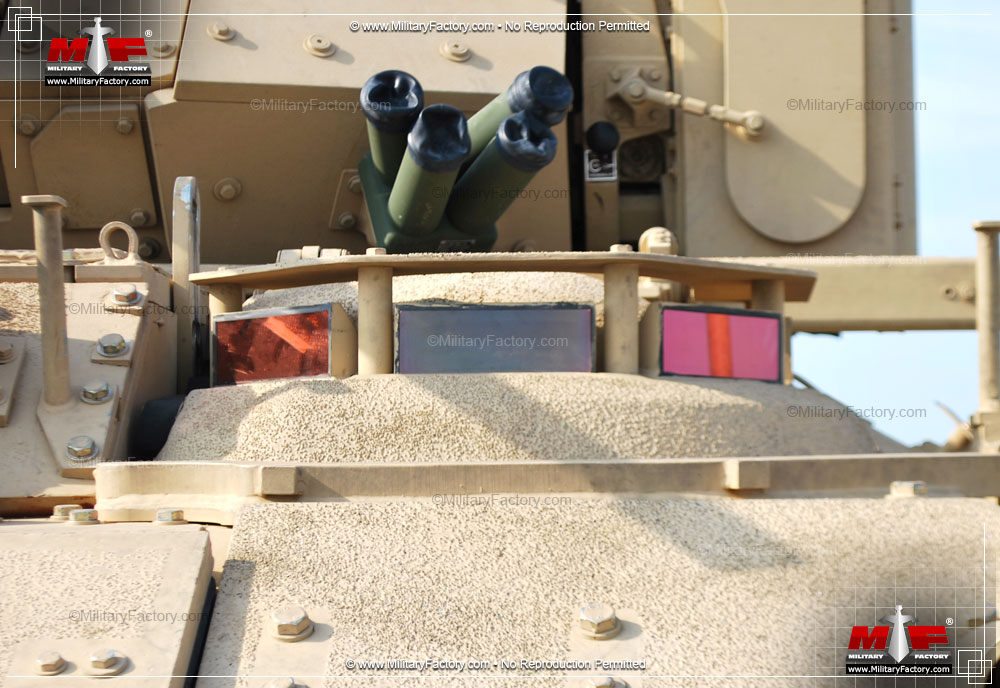 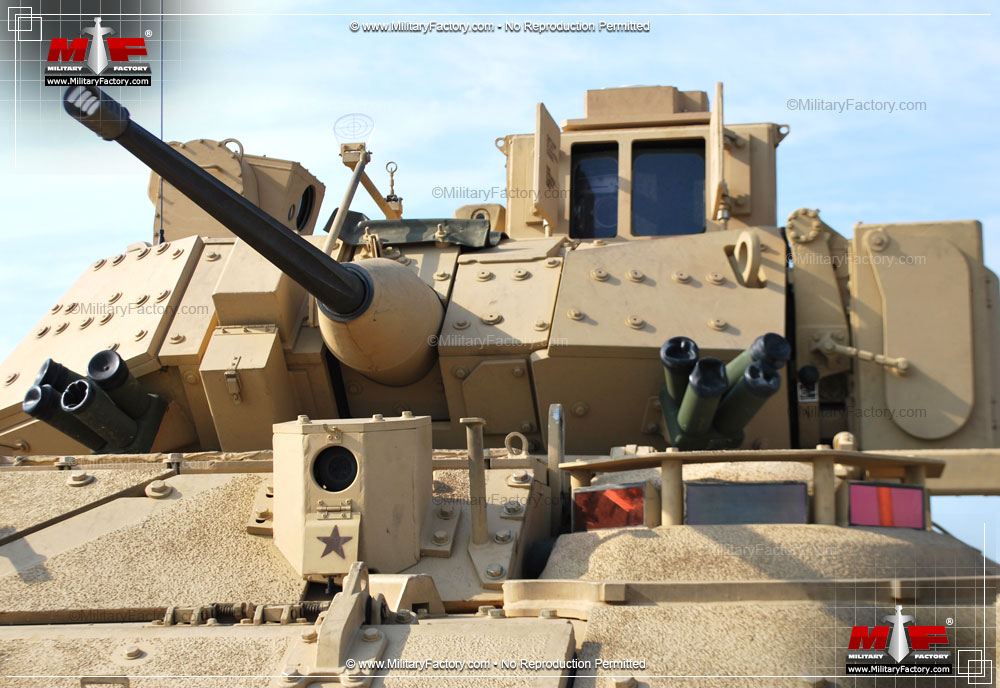 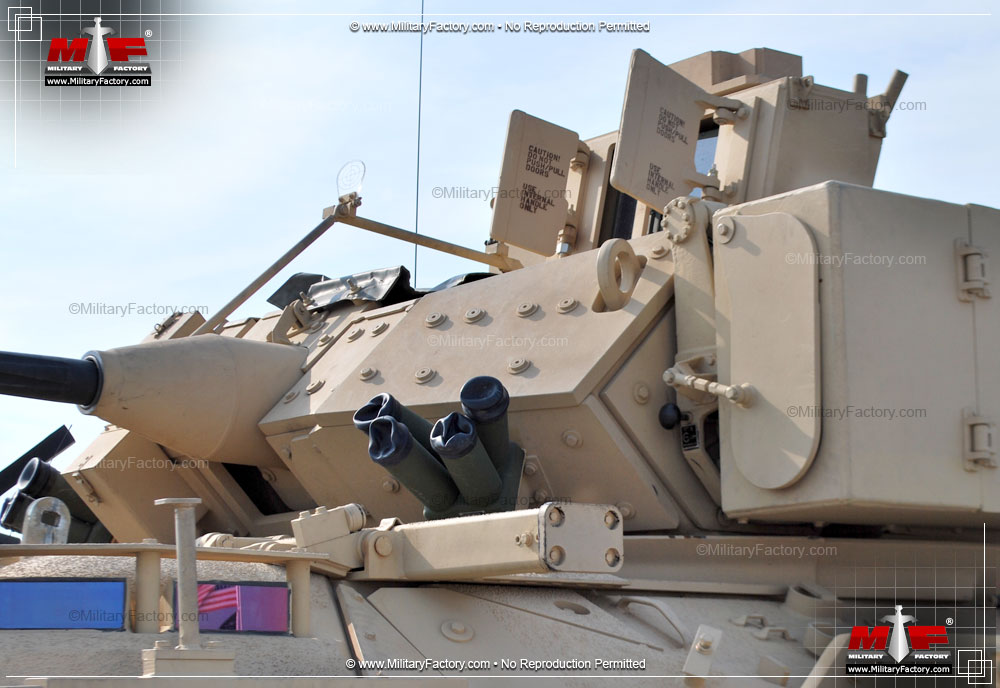 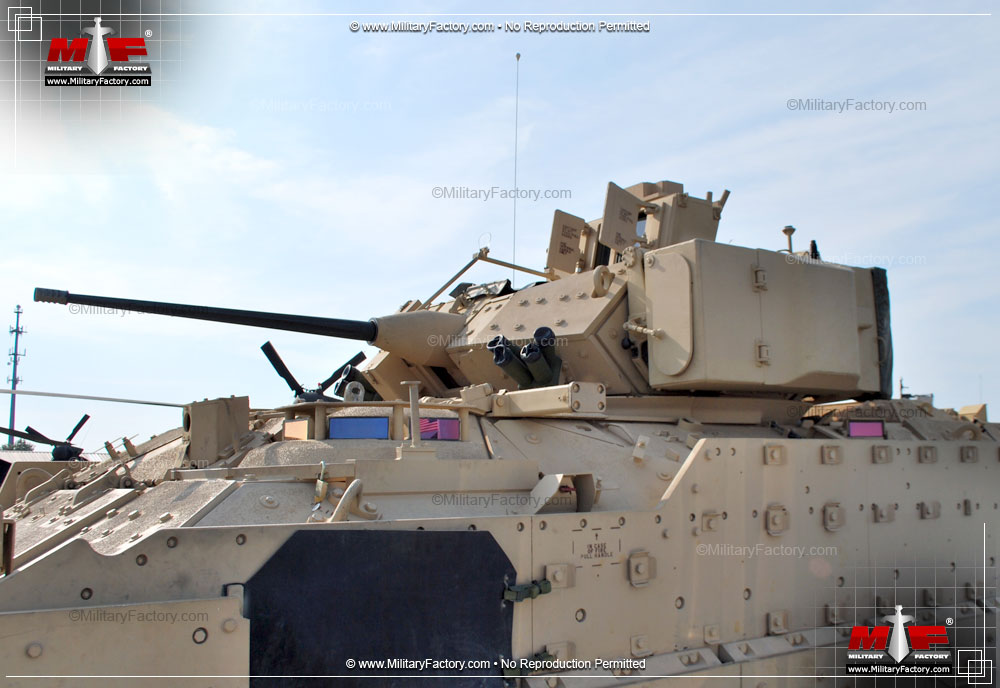 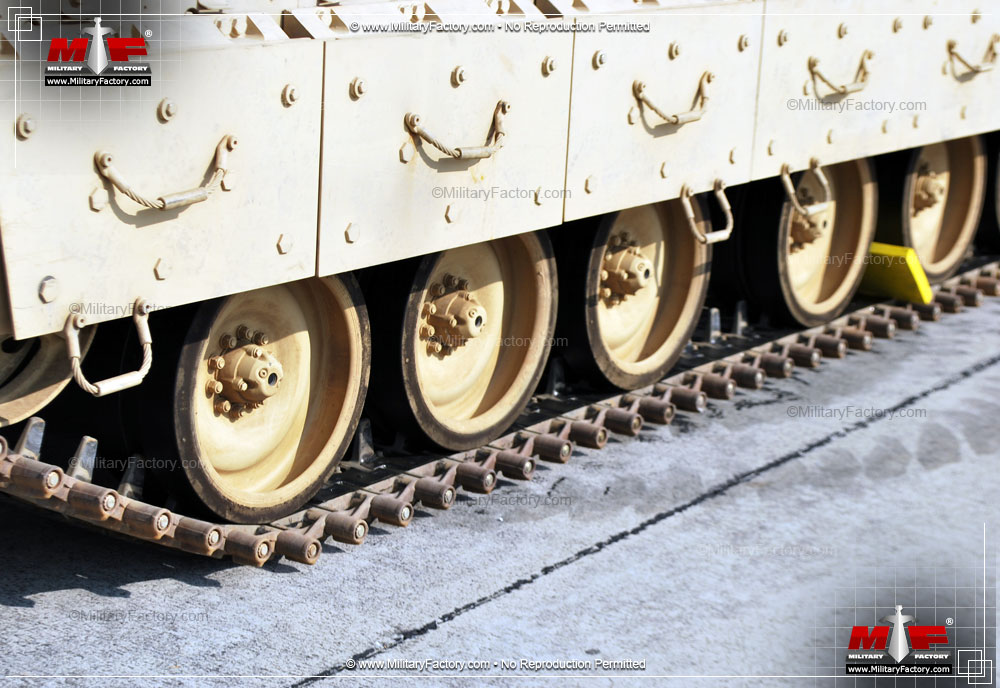 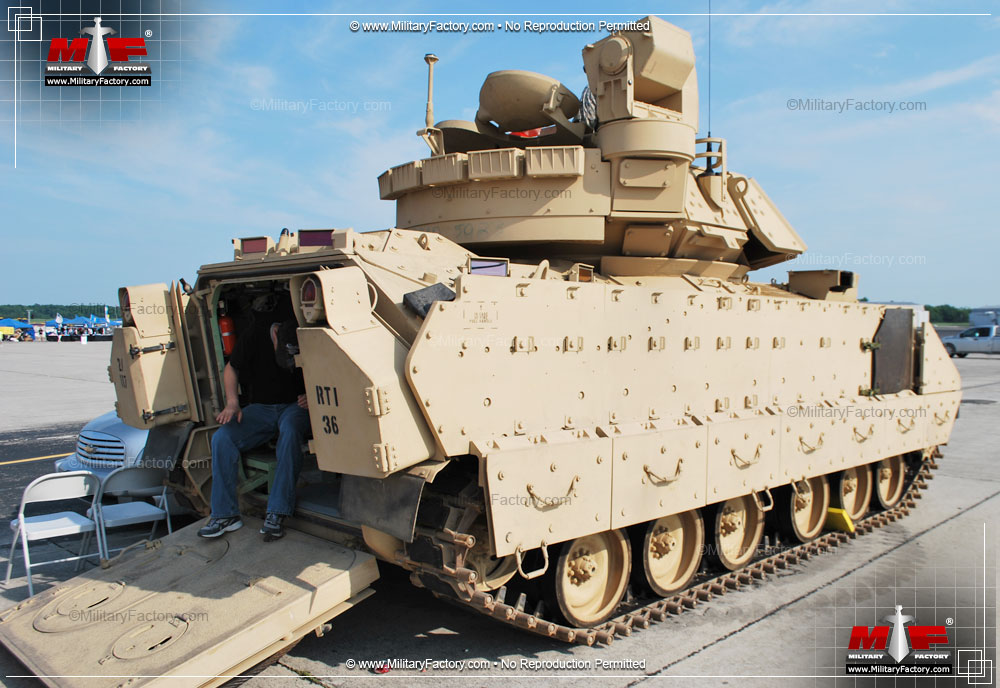 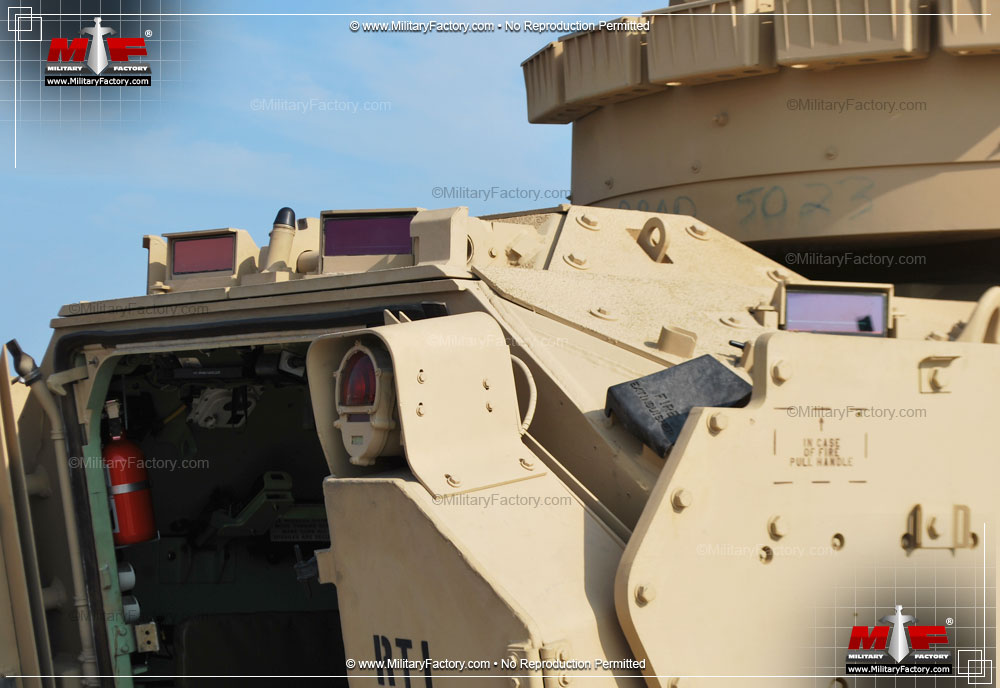 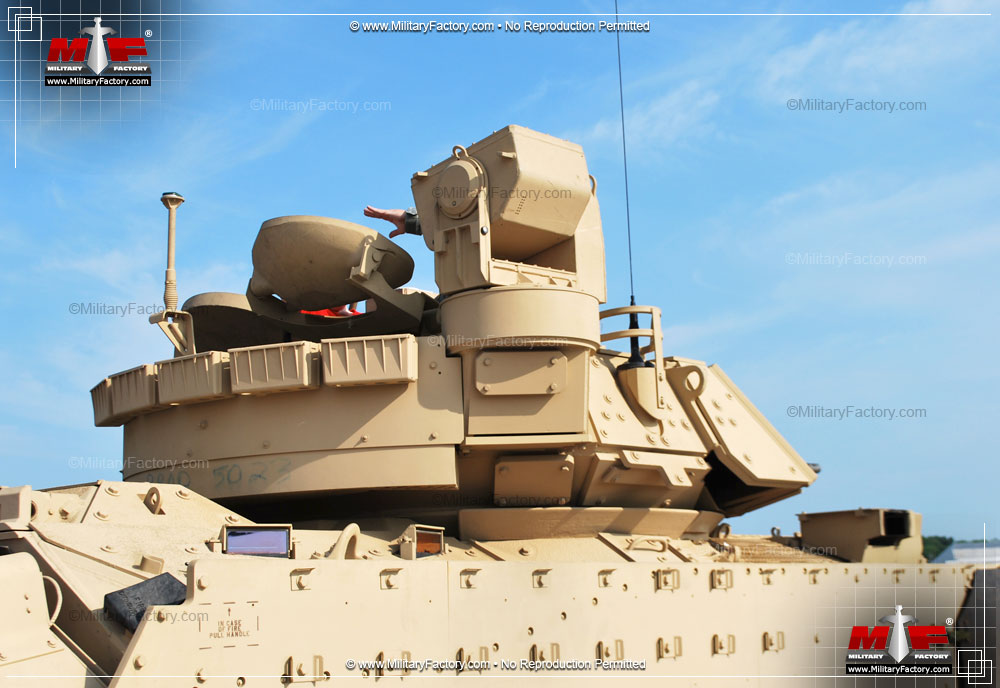 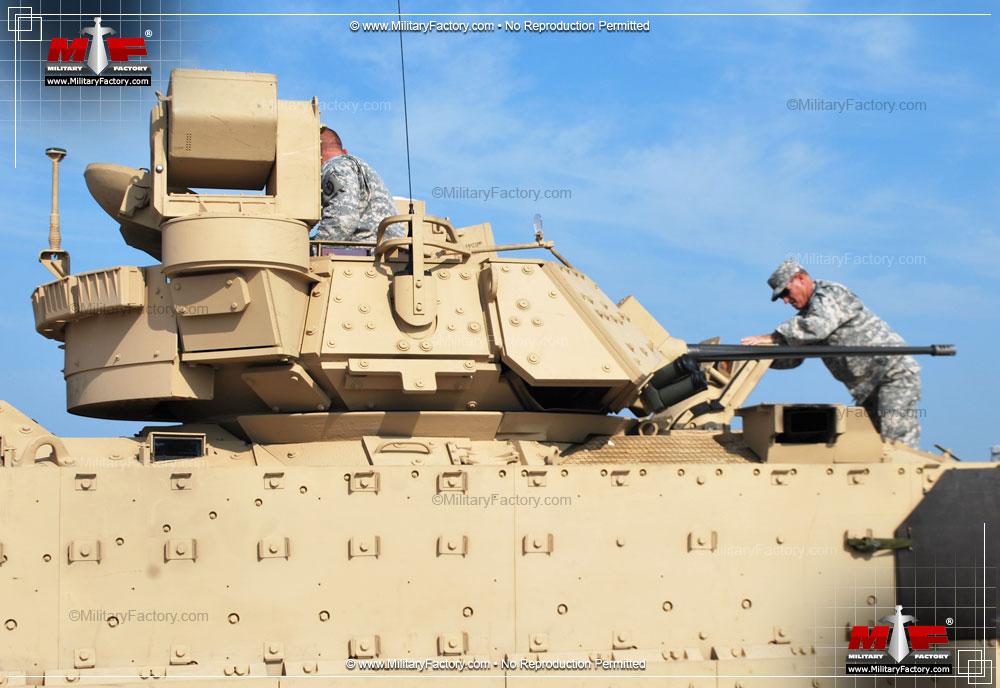 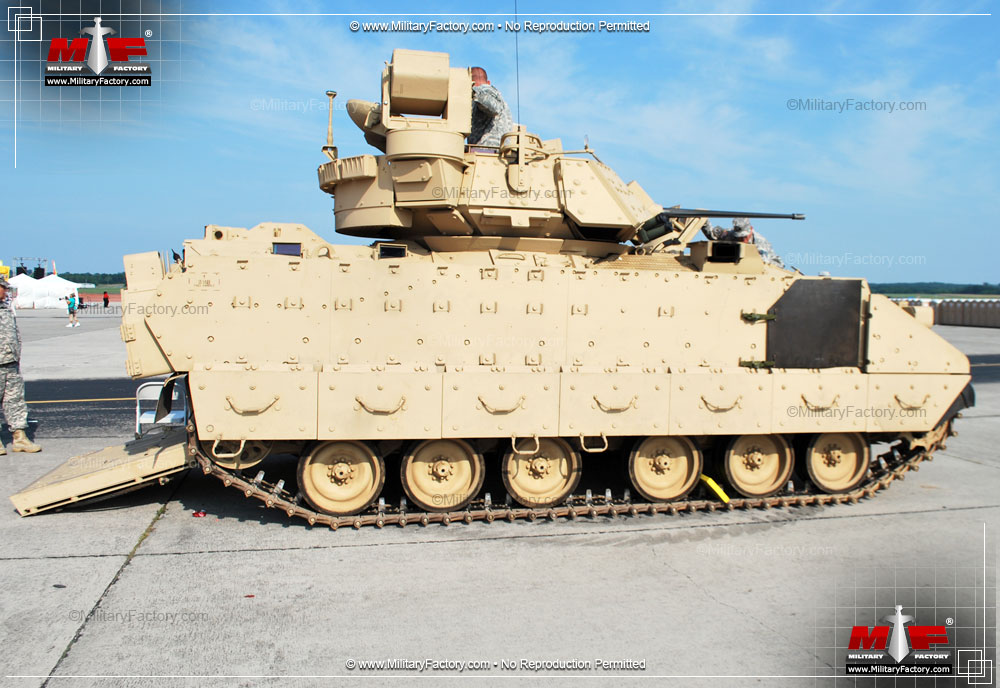 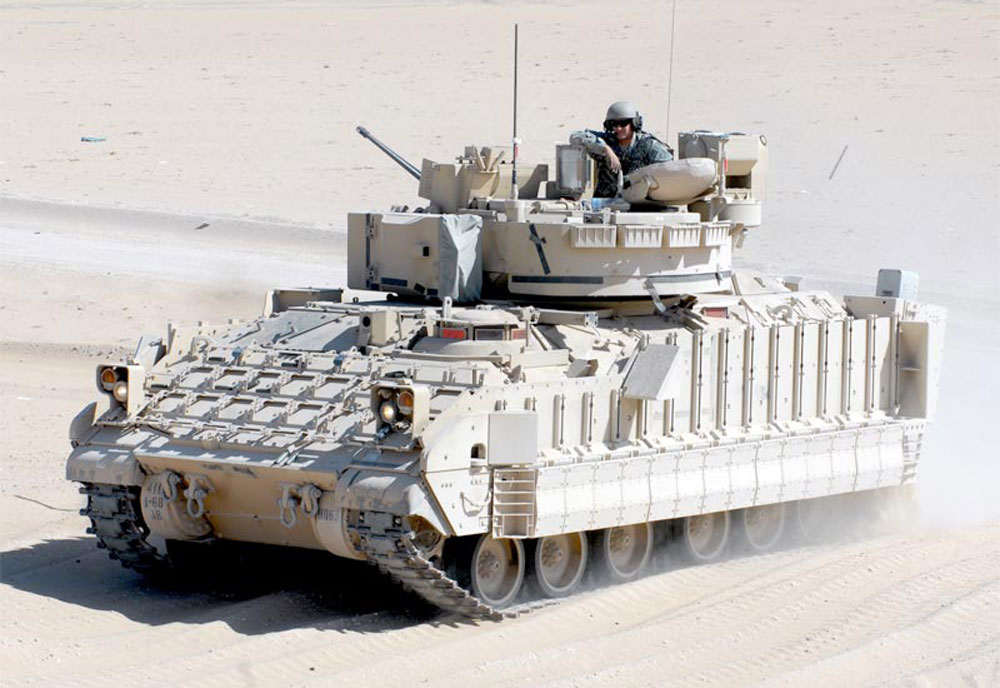 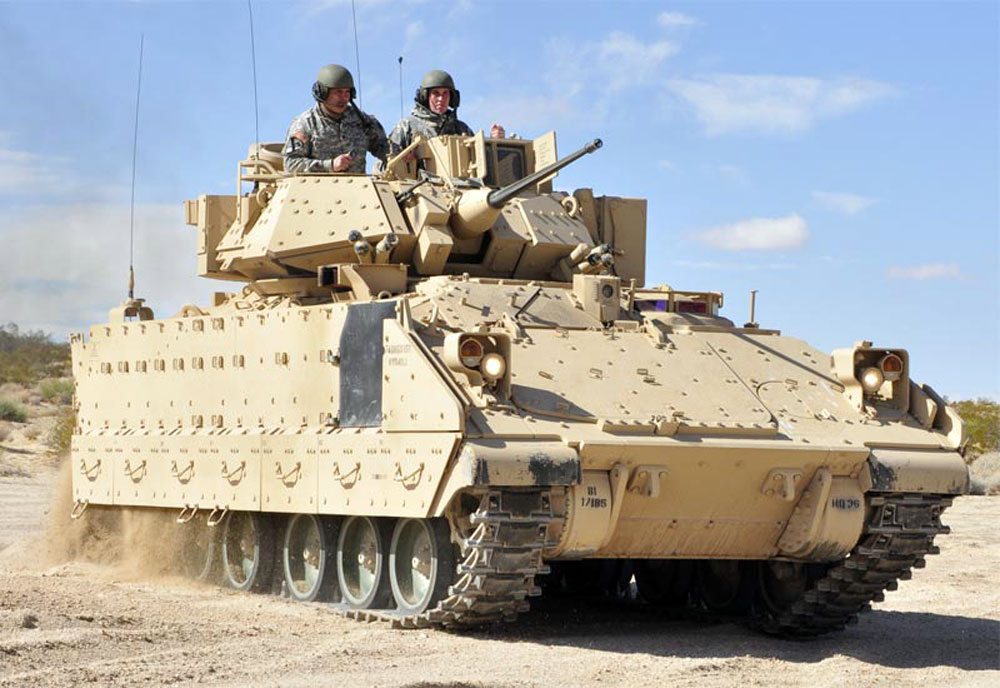 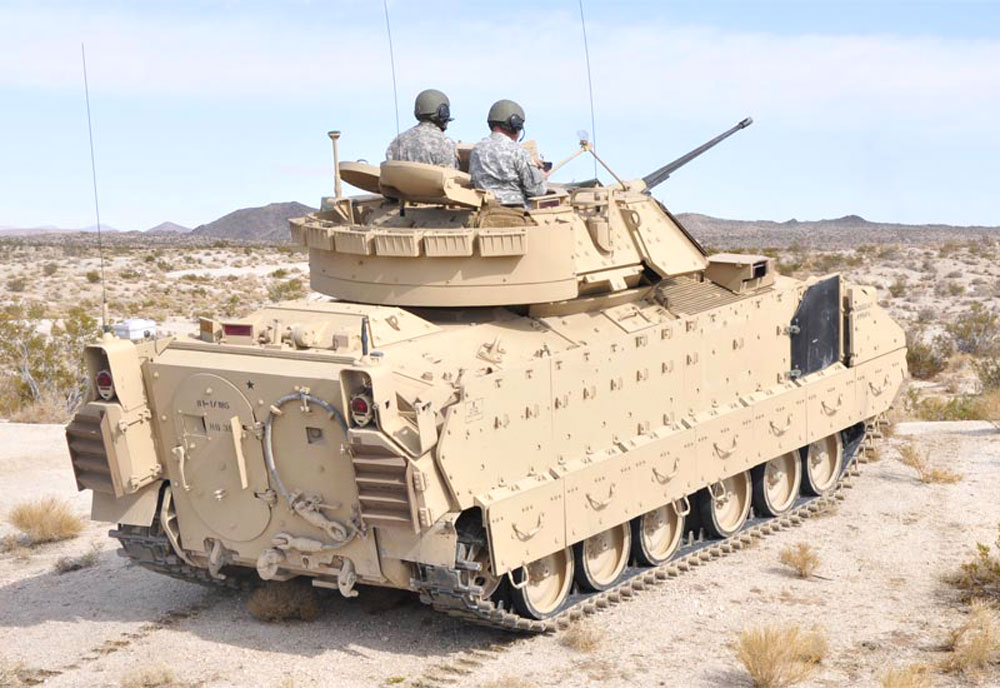