Authored By: Staff Writer | Last Edited: 11/01/2017 | Content ©www.MilitaryFactory.com | The following text is exclusive to this site. 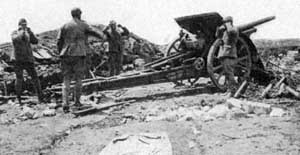 The Canon de 105 mle 1913 Schneider was a French artillery development with origins in a Russian Army 107mm design. Prior to The Great War (1914-1918), the French concern of Schneider moved into the Russian market by purchasing the Putilov concern. Putilov remained one of the key suppliers of artillery systems to the Russian Imperial Army. Upon reviewing the Putilov holdings, a new artillery gun design proposal of 107mm caliber was discovered which promised excellent range and accuracy. Schneider then revised this design in the widely-accepted 105mm caliber and began production of the type at the Schneider plant in France. Schneider showcased it to French Army officials but they were lukewarm on the idea, especially when its healthy stable of 75mm field guns was more than enough firepower for the time. Within time, however, a small supply of the new guns was eventually ordered in 1913 as the "L13S". For the Russian Army, the gun became the 107mm Gun M1910 of 1910 with production out of the Putilovski Works of Saint Petersburg - going on to see combat service in World War 1 and the Russian Civil War.

In 1914, World War enveloped most of Europe and, with it, France thanks largely to the novelty of upheld national alliances. The French Army was thrown into combat against determined German foes and initial gains and losses were replaced by the stalemate known as trench warfare. Trenches littered the World War 1 battlescape as each side dug in for the long haul, attempting to dislodge one another through suicidal maneuvers and offensives. One of the key components of such actions proved to be artillery and the larger the caliber the better the results. The new French 105mm artillery gun systems came into favorable play for such actions thanks in large part to their 105mm projectiles and range - the 75mm guns that the French Army had been relying on beginning to show their limitations. With the war now in full swing, the French Army committed evermore resources to the procurement of the mle 1913/L13S series in large quantities.
Advertisements

Design of the Canon de 105 mle 1913 was rather conventional for its time. The system consisted of the gun barrel, breech and carriage system (as well as it ammunition supply). The gun itself was mounted only a steel carriage characterized by its large blast shield and twin-wheeled base. There was a tow arm at the rear to help facilitate transport by a mover vehicle. Each wheel sported the traditional "spoked" appearance of earlier artillery though this was very consistent with the times. The blast shield was angled as such to provide limited protection to the gunnery crew with a vision slot cut out of the upper left hand side. The barrel protruded from this armored shield with the recoil mechanism fitted underneath. The breech mechanism consisted of an interrupted screw design while traverse of the gun barrel was limited to 6-degrees with elevations ranging from -5 to +37 degrees. Muzzle velocity of the 105mm projectile was listed at 1,805 feet per second with a maximum range out to 7.45 miles. Projectile types were typically of the high-explosive variety, intended to dislodge the enemy elements or destroy fortifications at range. A sighting/ranging device was set to the left side of the breech while wheels for adjusting elevation and traverse were set to either side.

Overall weight was over 5,000lb when ready to fire. When buttoned up for travel, the weapon system reached nearly 6,000lb gross. This was no small weapons system by any means for the barrel alone measured in at nearly 10 feet long. The height of the wheels themselves ran up to an average soldier's chest region. A crew of six personnel was standard for optimal gunnery management though a minimum of two could operate the weapon at reduced efficiency. Ammunition would have to be managed by a nearby ammunition carrier.

In practice, the gun proved its worth and gave excellent service. It provided artillery sections with optimal range as well as efficiency and reliability. Since war has a way of proving weapon systems sound or unsound, the conflict made the proven mle 1913 something of a hot commodity in the years following.

Following the close of The Great War in November of 1918, large numbers of the mle 1913 were in wide circulation prompting the French Army to pass many along to allied nations or sell them off to interested buyers. Italy took to local-license production of the type as the Canone da 105/28 which went on to serve the Italian Army well into 1943. Among its new owners were Belgium, Poland and Yugoslavia. The Poles took on deliveries of the 1913 series guns and, in 1929, updated them with a more modern split-trail carriage. Both versions were designated as Aramata wz. 13 and Aramata wz.29 respectively. As fate would have it - the listed nations were the prime countries invaded by the resurging German Army to begin World War 2. As such, many were captured and reconstituted for use by Hitler's German Army. After their in-the-field usefulness was past, these guns were permanently fixed along Hitler's "Atlantic Wall" defensive perimeter intended to protect his French/Norwegian conquests from Allied invasion by sea. In fact, many of the guns along the Wall were of the French variety and modified to sit atop turntable mounts with armor shields applied for crew protection. The captured 105mm guns were naturally assigned German Army designations based on the respective land of capture (see variants listing).

After the war, large scale use of the Canon de 105 mle 1913 Schneider was dramatically reduced. The new-found Israeli Army was one post-war operator of the weapon system as showcased by an example on display in Tel Aviv with its relatively new rubber road wheels.
Advertisements 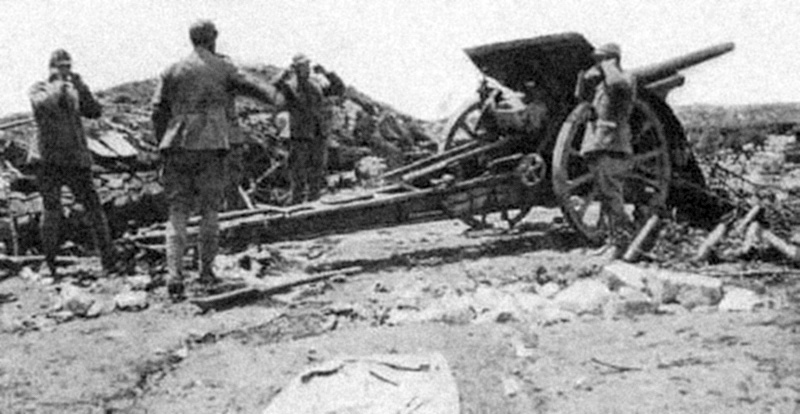 A gunnery crew prepares to fire their mle 105 series cannon