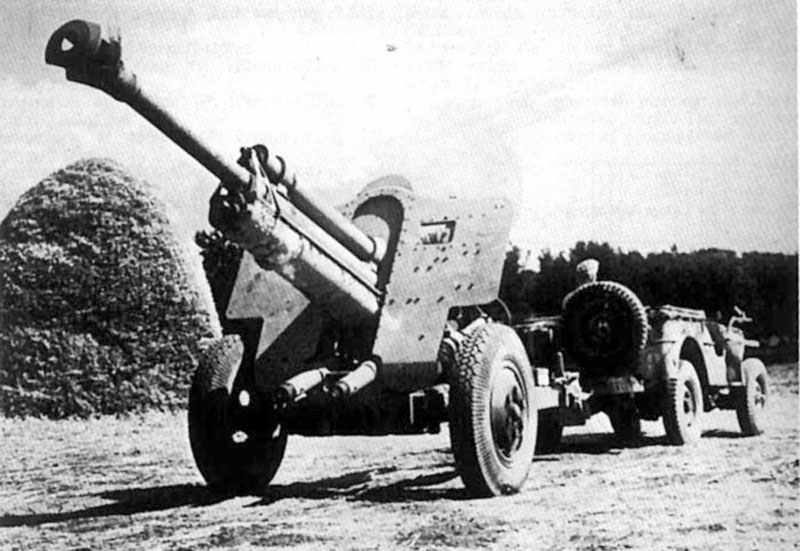 A Soviet 76mm USV field gun in service with German forces, this example noted for its non-Soviet muzzle brake installation

Authored By: Martin Foray | Last Edited: 11/11/2020 | Content ©www.MilitaryFactory.com; the following text is exclusive to this site.
The 76mm Divisional Gun M1939 was developed to replace the 76mm Divisional Gun M1936 (F-22) system of similar scope in the Soviet Army inventory. The original M1936 debuted in 1937 and was produced in nearly 3,000 examples between 1937 and 1939 and saw combat with Soviet forces against Japan, Finland and Germany before and during World War 2. The M1936 was itself designed to overtake the obsolete M1902/30 series guns and fitted a 76.2mm gun onto the carriage of the existing 107mm field gun, essentially making the system a stop-gap component of sorts until a more viable option was formulized. Similarly, the M1939 was designed to newer Soviet Army requirements to overtake the M1936 and have qualities based on the M1902/30 with the inherent capability of doubling as an indirect artillery piece and a direct-fire anti-tank weapon. Three Soviet design bureaus submitted their plans and evaluations ensued. Design of the winning system - known as the "USV" or "76-36" - was handled by Design Bureau No. 92 Plant and the weapon was formally accepted into service with the Red Army in 1939 (hence the alternative "M1939" designation). From there on, some 9,812 examples would be produced up until 1941 before the type was replaced.

Initially, production yielded just enough divisional guns to supply the original Soviet Army requirement. However, when Germany enacted "Operation Barbarossa" and formally invaded the Soviet Union on June 22nd, 1941, Soviet factories began production output of the USV system once again. This effectively allowed the USV to appear in greater numbers than intended and the weapon saw considerable combat throughout the remainder of the war in 1945.

The base USV fired a standard 76.2x385mm R projectile and ammunition types were highly varied and specialized as the battlefield need required. There were standard High-Explosive (HE) types as well as Armor-Piercing High-Explosive (APHE) and High-Explosive Fragmentation (HI-FRAG). Shrapnel, incendiary, canister, smoke and chemical were also available. This allowed the USV to be used in both the indirect and direct fire support roles to assist in offensive infantry actions or as an anti-tank gun. Interestingly, the USV used the same caliber as earlier Soviet gun types and, therefore, could make use of previously manufactured projectiles as supply allowed. The crew of five operated the weapon system by way of sight and elevation controls mounted to each side of the barrel. The firing action was semi-automatic with a vertical sliding breech block mechanism and the recoil was retarded by way of a hydraulic buffer and hydropneumatic recuperator.
Design of the USV was standard as towed artillery systems go. The main gun - essentially the barrel, breech and recoil system - were all situated on a mount set between a pair of suspended road wheels (metal with rubber tires). The rear was the split trail carriage arrangement that allowed the artillery piece to be towed by various vehicles. The wheels and carriage also allowed the crew to "fine tune" their position. Elevation of the main gun was between +45 and -6 degrees while a traverse of 60-degrees was afforded. The USV weighed in at 3,240lbs when set up to fire. In travel mode, the weapon weighed in at 5,511lbs. The system was 6.4 feet wide from wheel to wheel and 5.6 feet tall to the height of the shield. A trained crew could loose up to 15 rounds per minute at a range out to 8.25 miles.

The USV was utilized extensively across the vast battle lines of the East Front and its design (or facets thereof) were informally copied elsewhere in the world. The type proved such a success in its debut against Finland in the "Winter War". The Finns captured a few of these guns and designated them as the "76 K 39" though none were thought to have been used operationally against the Red Army. The Germans were not lost on the excellence of the Soviet design and promptly re-instituted the weapon into their own inventory after several hundred examples were captured in the initial thrust into Soviet territory. These USVs were redesignated for the German inventory under the name of "7.62cm F.K.297(r)" and several hundred were eventually captured while dozens more also served with Wehrmacht units on the West Front. However, the placement of the gun controls worked against the crew and gun for these were situated on the opposite sides of the gun and were positioned in a most awkward state during the intense heat of battle.

To take the design even further and in desperate need of tank-stopping implements, the German 7.62cm FK 297(r) guns were modified to become direct-attack anti-tank guns with new ammunition. These revised forms now fell under the German Army inventory designation of "7.62cm PaK 39(r)". Several hundred captured USVs are thought to have been converted to these make-shift anti-tank systems and, once in practice for the designated role, proved to have excellent penetration capabilities even against the thick armor of the Soviet heavy tanks. These guns went on to see combat in the North African campaign.

In Soviet Army service, the USV was soon found to exhibit excessive weight and size for the intended role - a role dependent upon quick reaction and readjustment as the battlefield dictated. Thusly, a replacement was already underway and eventually came in the form of the ZiS-3 series gun beginning in 1942. Quantitative production of the ZiS-3 soon overtook the USV in the standard divisional gun role but the USV soldiered on for years after for its inherent qualities still served a rather important field purpose - especially for a nation during war time. Additionally, the disrupted production output of the USV series was never to completely recover from the German offensives into the Soviet Union, thus making the older system expendable in favor of the new.

Beyond the standard pre-war designation marker of "USV", the field gun was also known as the "ZiS-22" in its war time form. There were some variations in this version including the use of ZiS-13 type sights, increased cast manufacture and a revised suspension system. The "USV-BR" marker was used for those USV guns coming out of the Barrikady Plant with these differing only slightly in their overall construction and suspension systems.

(Not all weapon types may be represented in the showcase above)
76.2x385mmR projectile; Count dependent upon ammunition carrier.