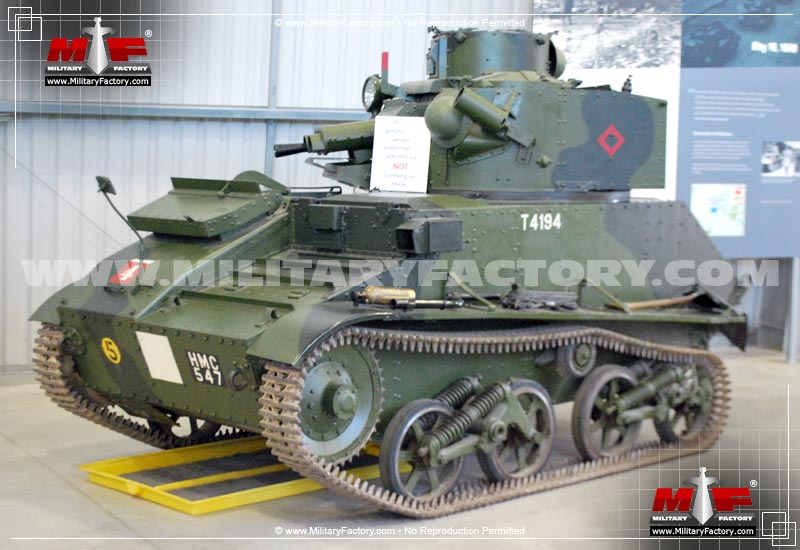 Despite their size, the Mk VI family served a critical purpose in the British Army during the early going of World War 2.

The British Army made use of a long line of light tank forms in the lead-up to World War 2 (1939-1945). The line began with the Mk I and advanced through the Mk II, III, and IV marks seen throughout the early-to-mid 1930s. The Mk V was notable for its introduction of a three-man crew thanks to a new turret and this work paved the way for the Mk VI which went on to see considerable combat service in World War 2.

Because of the rather limited supply of tanks on hand when war officially broke out in September of 1939, the Mk VI became one of the most important British ground combat systems available. It had already entered circulation for local Army forces and was being used overseas to protect British colonial holdings in more unsettled areas. When German forces crossed into Poland on September 1st, 1939, there were some 1,000 Mk VI vehicles ready for service. Their first contributions came as infantry support platforms and armored reconnaissance vehicles until the Battle of France was lost and the Allies pushed out of mainland Europe.
Advertisements

In its base form, the Mk VI utilized many of the stronger qualities that made the earlier line of British light tanks successful for their given battlefield roles. It was a vehicle weighing in the 5-ton range (short) and featured a length of 13 feet, width of 6.9 feet, and a height of 7.2 feet. Handling was deemed quite good though the vehicle held a tendency to lean heavily when in motion or attempting to cross uneven terrain. The crew numbered three and included the driver (at front-left with the engine to his right) with the gunner and commander in the two-man turret. The turret housed the standard armament of 1 x 0.303 Vickers medium machine gun (water-cooled) and 1 x 0.50 Vickers heavy machine gun and also held enough internal space for the radio set (typically managed by the commander). Armor protection ranged from 4mm to 14mm across the various facings which provided enough protection against small arms fire. The running gear included four road wheels set across two individually-sprung bogies with the drive sprocket at front and track idler at rear. Power was through a Meadows 6-cylinder gasoline-fueled engine developing 88 horsepower and mated to a Wilson pre-selector transmission system. The hull was suspended atop a Horstmann inclined spring system and ground clearance reached ten inches. Operational range was out to 130 miles and maximum road speeds topped at 35 miles per hour.

Despite the major setbacks of the earlier campaigns, the Mk VI design soldiered on into the middle war years simply due to its availability and usefulness. It was further pressed into service during the North African Campaign where results were a mixed lot. The Mk VI found a place on these desert battlefields in corralling beleaguered or flanked troop remnants while leaving direct contact actions to the heavier medium-class tank systems. The type remained a British Army fixture through to the Crete Campaign and was not given up for good until 1942. It also saw service with Commonwealth forces in Australia, Canada, India, and New Zealand before the end. Some wartime leftovers were also witnessed in the 1948 Arab-Israeli War with Egyptian forces. The Netherlands became another Mk VI series operator.

Production from Vickers-Armstrong totaled 1,682 Mk VI units and this from the period spanning 1936 to 1940. The initial production mark was Mk VI though other variants followed attempting to rectify some shortcomings of the original design. For instance, the Mk VIA saw the track return roller repositioned and its commander's cupola given a more faceted design form. The Mk VIB was a manufacture-friendly variant that included such changes as a single piece radiator cover over the original two-piece design. The Mk VIC lost its turret cupola and was armed through 1 x 7.92mm BESA medium machine gun coupled with 1 x 15mm BEDA heavy machine gun while three carburetors were added to the engine. The chassis also served in an Self-Propelled Anti-Aircraft Gun (SPAAG) vehicle design as the Light Tank AA Mk I. This model held an all new turret with powered traverse function and an elevation reach while seating 4 x 7.92mm machine guns in a side-by-side arrangement. The Mk I form was improved through an Mk II offering in time.