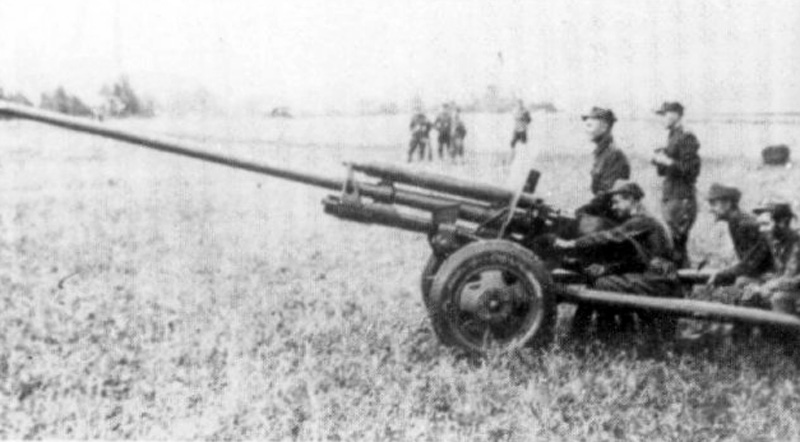 The ZiS-2 anti-tank gun was used in great numbers by the Red Army throughout the latter half of World War 2.

Like other global military armies of World War 2, the Soviet Army eventually adopted an anti-tank gun in 57mm caliber. However, its design and development did not begin until 1940 by which time World War 2 (1939-1945) had officially begun through the German invasion of Poland in September of 1939. Design work on the new "ZiS-2" 57mm system was attributed to V.G. Grabin , an artillery engineer operating from the No. 92 Artillery Factory and his talents in his trade also led to the adoption of the more potent 76.2mm "ZiS-3" series guns of 1942 - detailed elsewhere on this site. The ZiS-2 was comparable in mission scope and battlefield capability to the British Ordnance QF 6-pounder (57mm) AT gun of 1942, also detailed elsewhere on this site.

Using the stoutest of Soviet tanks in operation at the time - the KV-1 featuring up to 90mm armor thickness - engineers agreed that the 57mm projectile was sufficient for penetration, even at range. As such, the main gun tube component of the new weapon would be centered around the 57mm caliber and feature an integrated recoil mechanism and mounting hardware. In keeping with accepted practice the world over, a two-wheeled, split-trail carriage sporting a small gun shield would be used as both the transport base of the system and as its firing base. The weapon was formally adopted in early 1941 as the "57mm Anti-Tank Gun, Model 1941" but better known to history as the "ZiS-2". The "ZiS" in the designation was formed from the words "Zavod imeni Stalina" translating to "Factory Named (after) Stalin".

The ZiS-2 fired a 57x480mmR projectile at a muzzle velocity reaching 3,300 feet per second out to ranges of 5.2 miles. A trained and experienced gunnery crew could reach a rate-of-fire of 25 rounds-per-minute. The weapon was strictly a line-of-sight (LoS) weapon so the crew needed to be able to see the target for its best chance of success (as opposed to howitzers which lobbed explosive shells onto "soft" enemies). The gun mounting hardware held an inherent elevation span of +25 to -5 degrees and could traverse up to 56-degrees left or right. Loading was through a vertical block breech system. The complete system weighed 2,755lbs which required a mover vehicle or "beasts of burden" to move the gun over long distances. The gunnery crew could make fine adjustments at their intended firing position by moving the gun about its wheels.
Advertisements

On June 22nd, 1941, the German-led Axis forces invaded the Soviet Union, turning Germany's fortunes forever. By this time, the ZiS-2 had been in practical service through some 370 units in circulation. However, the 57mm projectile was a new adoption by Soviet forces and this meant that industry had to manufacture a completely foreign round for active combat service. When pressed into battle, the projectiles were reportedly weak against the middle-generation Panzer tanks being fielded by the Germans. This led to a re-adoption of 45mm anti-tank guns instead and a premium placed on development and production of the more potent ZiS-3 gun series. Production of ZiS-2 guns was halted for the remainder of 1941 and none were produced in 1942.

When the need for more guns prevailed, manufacture of ZiS-2 guns was reactivated in 1943 and this ran into the end of the war in 1945. During this period, an additional 9,645 guns were completed bringing total manufacture of the series to 10,016 units. The new-model guns were redesignated with the "Model 1943" name though they largely remained the same weapon.

Despite its anti-tank prowess by classification, the 57mm ZiS-2 could do little against the more advanced tank designs emerging out of German factories - namely the Panzer V "Panther" medium type and the "Tiger" and "King Tiger" heavy types - which required at least the Soviet 76.2mm projectile to pierce. As such, the role of the ZiS-2 gun was drastically reduced as the war winded down in 1945 and, in the post war years, it was only under issue with Soviet airborne forces due to its compact size and manageable weight. Some wartime models were installed on existing chassis to generate make-shift tank destroyers - as was the case with the ZiS-30 of 1941. However, this was more out of desperation due to the fast German advance on Moscow and the loss of so many armored vehicles in the fighting. This particular vehicle development mated the ZiS-2 gun with an outdated artillery tractor chassis which, thankfully, was limited to just 100 units or so.

The SU-57 Self-Propelled Gun was born from the simple mating of the 57mm anti-tank gun with the chassis and running gear of the American M3 Half-Track. 57mm AT guns (ZiS-4 L/37) fitted to T-34 tanks produced the "T-34/57" designation which saw limited production numbers. Captured ZiS-2 guns by the Germans were reconstituted as the PaK 208(r).


(Not all weapon types may be represented in the showcase above)
Dependent on ammunition carrier.