The ZSU-37 appeared too late for operational use in World War 2 and ultimately saw just 75 examples delivered.

Authored By: Staff Writer | Last Edited: 04/29/2019 | Content ©www.MilitaryFactory.com | The following text is exclusive to this site. 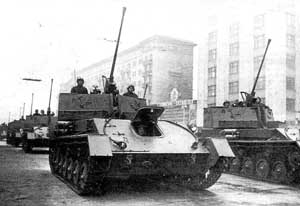 The ZSU-37 was born out of a Soviet Army need for Self-Propelled Anti-Aircraft Gun (SPAAG) protection in World War 2 (1939-1945). It was based on the chassis of the SU-76 self-propelled gun system which, itself, held origins in the T-70 Light Tank of 1942. Development of the 12.5-ton vehicle began in 1943 and production began slowly before the close of the war in Europe which yielded just a few operational vehicles from the Works Number 40 plant at Mytishchi. Manufacture continued in the post-war years to which 75 vehicles were delivered between 1945 and 1948.

The ZSU-37 fitted a single 37mm M1939 (61-K) autocannon in an open-air superstructure fitted over the rear of the T-70 hull. The hull was lengthened to accommodate the turret installation which resulted in a sixth road wheel being fitted to the track arrangement. The track-and-wheel system retained the front-mounted drive sprocket and rear-mounted track idler seen in the T-70 Light Tank and three track return rollers were used. Armor protection ranged from 6mm to 35mm across the various facings of the vehicle and dimensions included a length of 17 feet, a width of 9 feet and a height of 7 feet. A typical operating crew numbered six.

The ZSU-37 was driven by a GAZ-203 series 12-cylinder liquid-cooled gasoline engine - which was really just two paired 6-cylinder GAZ engines. The twin engines outputted at 160 horsepower allowing the ZSU-37 a maximum road speed of 28 miles per hour with an operational range of 220 miles. The torsion bar suspension system allowed for cross country travel to which speeds dropped below 20 miles per hour and ranges down to under 140 miles.

In operational service, the limitations of the ZSU-37 were soon pointed out. The light tank chassis was not as agile as required nor was its powerpack arrangement suitable for the ranges and speeds expected in Soviet tank maneuvers. Additionally, armor protection was poor and the open-air nature of the turret exposed the crew to all sorts of battlefield dangers and inclement weather. The single 37mm cannon - though powerful in other roles - was ill-suited for the role of fast-acting gun against incoming, moving aerial targets.

As such, ZSU-37s did not lead a noticeably long service life and, with its limited production run, fell to history. The Soviet Army adopted the 2 x 57mm cannon-armed ZSU-57-2 SPAAG in its place, this design based on the much improved chassis and running gear of the famous T-54 Main Battle Tank (MBT).

The ZPU portion of the designation is from the Russian "Zenitnaya Samokhodnaya Ustanovka" which appropriately translates to "Anti-Aircraft, Self-Propelled Mount". The "37" in the designation comes from the cannon caliber.
Advertisements

Soviet Union
(OPERATORS list includes past, present, and future operators when applicable)
✓ Anti-Aircraft / Airspace Denial
Base model or variant can be used to search, track, and neutralize airborne elements at range.

(Not all weapon types may be represented in the showcase above)
Dependent upon ammunition carrier / supplies. 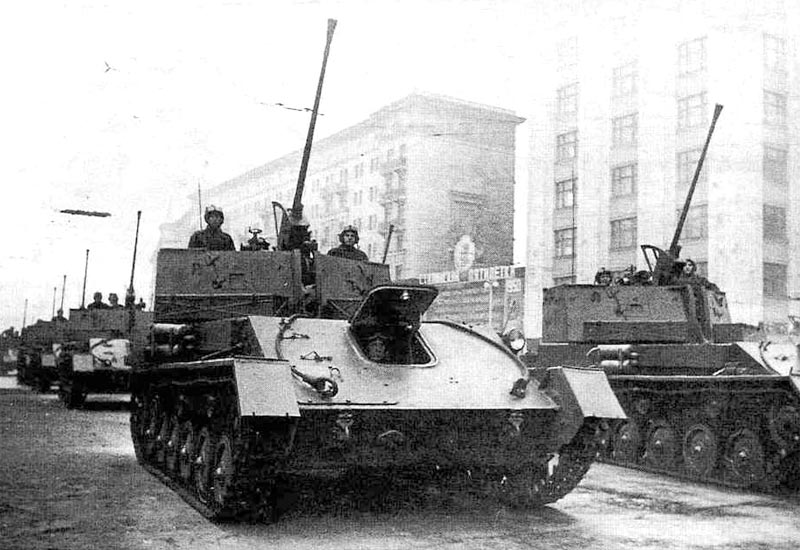