The M1/M59 Long Tom could be found in multiple theaters of war during World War 2 and saw action in Korea and Viet Nam. 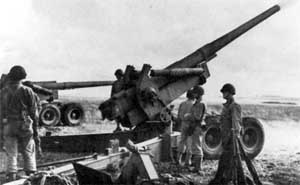 When the American military went to Europe in World War 1 in 1917 they were in short supply of just about any war-making implements including that of heavy artillery. One of the best of the day became the French-made Canon de 155mm GPF heavy gun. At the end of the war, General Pershing had a number of the GFP's brought back stateside to be reviewed and improved upon for use in the United States Army. American Army engineers worked on modifying the existing French-based system and, by 1926, a number of prototypes had been revealed. Work continued off and on (Army funding lacked) into the 1930's and ultimately produced a mating of the original French GFP with a new British breach system - the Asbury. The T4 gun prototype was fitted onto the T2 carriage prototype and entered service as the 155mm Gun M1 on Carriage M1. When the new gun was introduced to American troops they bestowed her with the affectionate name of "Long Tom".

The Army placed an initial quantitative order for 20 Long Toms and several arsenals began production. The main improvements to the original French design were the L/45 modified barrel mounted on the new M1 heavy-split tail carriage using the Asbury breach. The carriage had four double-tired road wheels mounted at the front end of the carriage, two sets to either carriage side. This placement acted as the stability point between the weight of the gun and the carriage and made the firing gun more accurate. Additional upgrades to the gun required the model designation to be changed to the "M1A1" (modified breech ring) in 1941 and, by 1944, continuing production changes ultimately birthed the "M2" designation (again, modified breech ring). The M1A1E1 became a prototype with a chromium-plated bore while the M1A1E3 was another prototype featuring liquid cooling.

The M1 Carriage was redesignated to M1A1 after undergoing a process of refurbishment.

The M1/M2 shell used was a 43.1 kg (95lb. ) projectile and, when fired at a 45-degree angle, it would send a High Explosive (HE) round some 25,395 yards out - up to 15 miles away - with a high rate of accuracy. A qualified crew of 15 men could fire more than 40 rounds per hour consisting of high-explosive, chemical, smoke, or illuminating shell types. The gun elevation, up to 63-degrees, gave the crew a wide arc of fire.
Advertisements

The gun proved reliable in practice and became the standard heavy gun in the US Army arsenal. Its success was further driven home by its sales to allied nations around the globe. The weapon was used in large numbers during World War II, the Korean War and the Viet Nam conflict. Many nations continued to use the gun well into the 1980's. After World War II, the US Army bestowed upon the M1/M1A1/M2 the new designation of "M59" during a reorganization period.

The standard tractor used for towing the M1in World War II was the M4 High-Speed Tractor which also doubled as an ammunition carrier. By 1942, the manufacturer Allis Chalmers produced a tracked tractor that weighted 14.2 tons but offered no armor protection for the driver. The Waukesha 6-cylinder gas engine produced 210 horsepower and 14.7 horsepower per towing ton. This vehicle gave the heavy gun a means to deploy over 290 km of territory with a maximum speed of 53 km/h. Once the M4 arrived at the firing position with the Long Tom, the crew needed about 30 minutes set up time before firing the first round. Long Tom was delivered to UK and French forces via Lend-Lease in numbers totaling 184 and 25 respectively. Her combat debut occurred in North Africa in 1943 as part of the 34th Field Artillery Battalion. She saw further actions in Europe and the Pacific and was most often times transported by way of the Mack NO 6x6 7 1/2 ton utility truck until that mode of transportation gave way to the tracked M4 mentioned above.

She provided "steel rain" along many fronts and fought on in battles during the North African campaign, against the caves on Peleliu, into the numbers of North Korea and in the jungles of Viet Nam.

(Not all weapon types may be represented in the showcase above)
Dependent on ammunition carrier. Separate loading, bagged charge. 95lb projectiles available in HE, smoke, gas, and illumination. 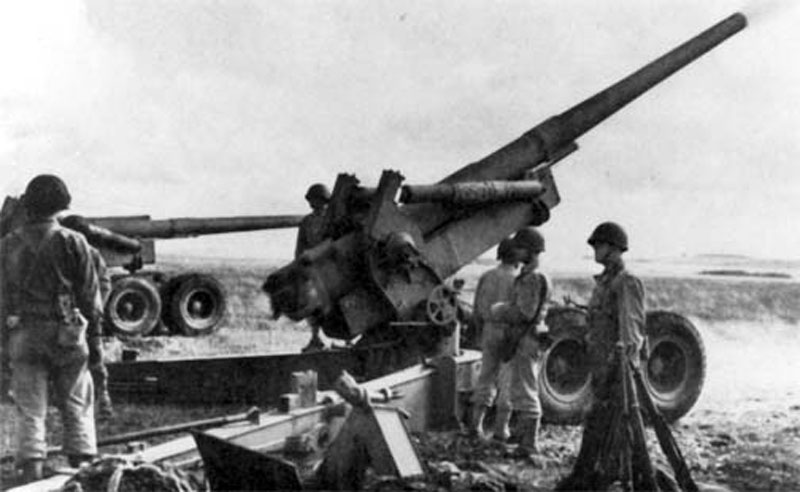 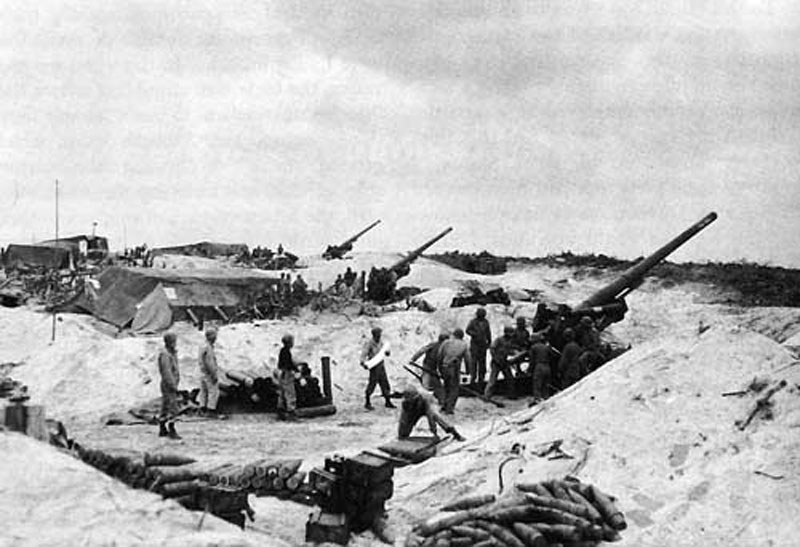 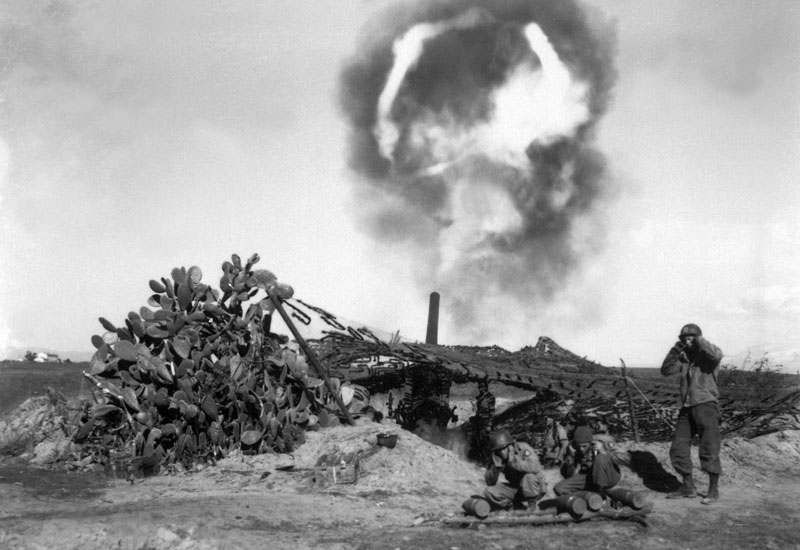 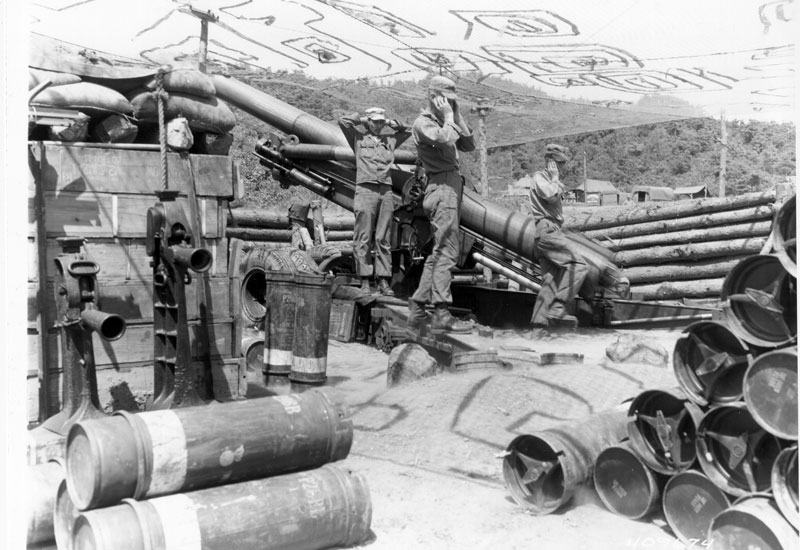 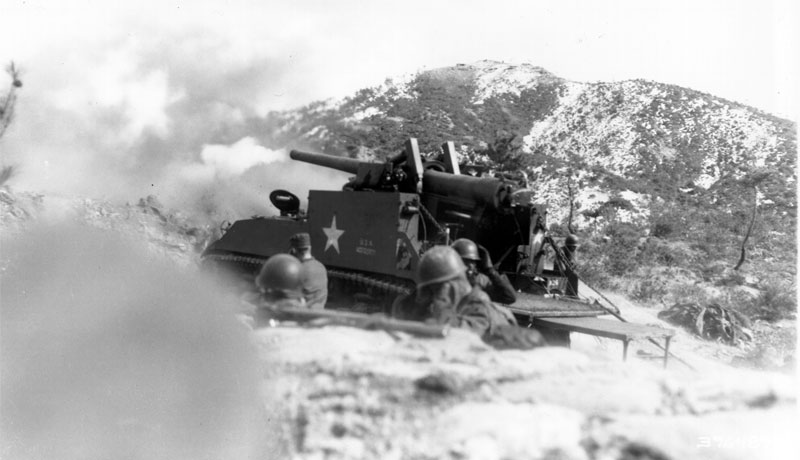 A tracked Long Tom is fired to good effect
6 / 7 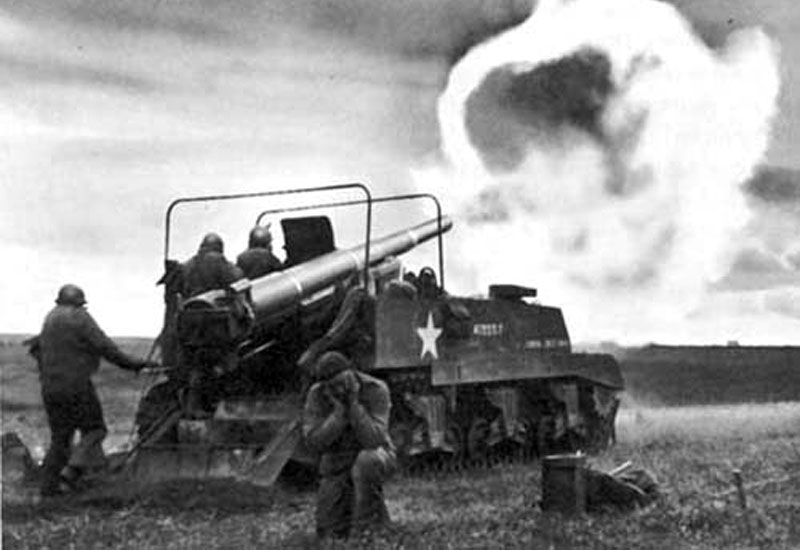 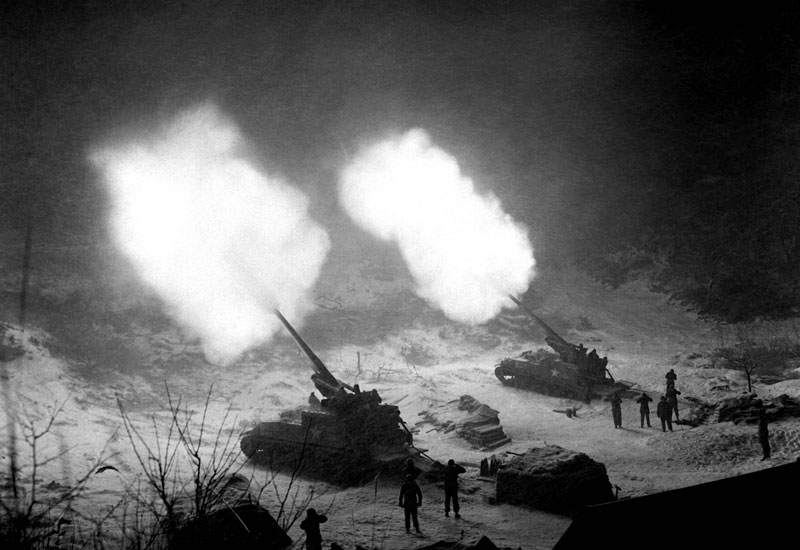 Several tracked Long Toms open up in the dark of night
❮ ❯