At one time, the Soviet KV-1 Heavy Tank was identified as the most powerful tank in the world.

Authored By: Staff Writer | Last Edited: 05/22/2019 | Content ©www.MilitaryFactory.com | The following text is exclusive to this site. 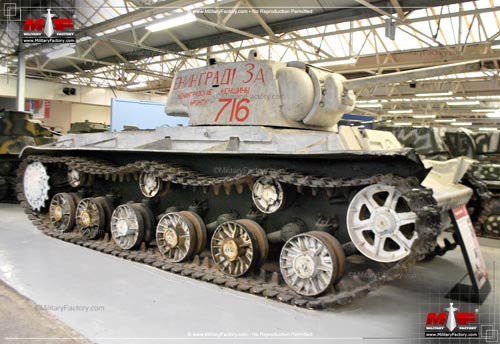 In 1938, the Soviet Union developed a prototype heavy tank of 58 tons designated as the T-100. The type was a massive machine fitting two individual turrets - one armed with a 76.2mm main gun and the other with a 45mm cannon - and required a crew of up to eight personnel. Armor protection was upwards of 60mm in thickness and the tank was powered by a water-cooled 800 horsepower engine fitting. However, the engine proved underpowered and unwieldy for the vehicle's weight and intended battlefield role and its evaluation debut in the Russo-Finnish War (1939-1940) led to only two pilot vehicles ever being completed.

As such, another solution to fulfill the requirement for a new heavy tank for the Red Army was sought. The multiple turret/multiple gun arrangement was akin to World War 1 tank design doctrine and a more modern design was now the call of the day. Regardless, Soviet design bureaus in 1938 still introduced multi-turreted tank designs for consideration, though most of these in prototype form ultimately settled on just two primary turrets.

One design bureau took the T-100 design as a starting point and her engineers devised a single turret heavy tank that was smaller dimensionally, lighter in weight while being better armored and mobile and sharing more mechanically with the new T-34 Medium Tank series. Formal construction of the new tank began in February 1940. The resulting design initiative became the "KV-1" and, like the T-100 before it, the prototypes were also put into combat against the Finns with better results, tested under real-world combat conditions. Whereas T-28 and T-35 tanks fell to Finnish tactics and ambushes, KV-1 tanks with their improved armor protection shines despite mechanical issues. The mechanical issues stemmed largely from the gearbox and clutch system. Incidentally, the KV-1 designation stemmed from Klimenti Voroshilov, the then-acting Soviet Defense Commissar (Defense Minister). The KV-1 was then formally accepted for serial production in the Red Army and immediately replaced the outmoded T-28 medium and T-35 heavy tanks - these being of 1935 origins while sporting a multi-turret arrangement and weighing over 44 tons. Despite the KV-1s mechanical issues, the growing need for more war tanks spurred serial production forward, resulting in some 5,219 examples completed by war's end. The Soviet Union was the sole operator of the KV-1 (aside from captured systems reconstituted by the German Army).

Upon inception into formal service with the Red Army, the KV-1 was considered the most powerful tank in the world based on the combination of firepower and weight and went on to lay the foundation for Soviet/Russian tanks for decades to come. It arrived in some number at a most crucial time for the Red Army for the German invasion of the Soviet Union through "Operation Barbarossa" in June of 1941 took the national forces by surprise. Only some 500 to 635 KV tanks were in service at the time of the invasion and these were initial used in spread out formations as opposed to dedicated armored regiments. It proved extremely useful in the break out role where it could use its stout armor configuration and high-powered main gun to smash through German defenses, leading the thrust of Red Army offensives and opening gaps for following T-34 Medium Tanks. As speed was not essential to the role, the KV-1 was more or less designed for such a feat. By 1942, the Soviets had learned that their KV tanks were much more effective in dedicated tank regiments and fielded them as such for the duration of the war. German crews were quick to note the new Soviet tank and were surprised to find their anti-tank weapons proving ineffective against the full frontal armor protection of KZ-1s, forcing infantry squads to tackle tanks head-on by any means necessary. Even the fabled "88" artillery guns required some work against tackling KV-1 tanks head-on. It was only the arrival of the German Panther and Tiger I tanks that more or less unseated the KV-1 series.

Externally, the immense KV-1 showcased a most stout design. Her appearance was characterized by her track systems, each side fitted with six road wheels, three track return rollers, a rear-set drive sprocket and forward-set track idler. The hull sported a heavily-sloped glacis plate leading up to a shallow hull superstructure to which was mounted a heavy turret system along a circular bustle. The main armament was fitted to the turret backed by a collection of light machine guns throughout the design. The engine was held in a rear compartment. The KV-1 in all its variant forms was crewed by five personnel made up of the driver (seated front center in the hull), a bow gunner (front left hull), tank commander, gunner and dedicated machine gunner. A detrimental facet of the KV-1's internal design was that the commander doubled as the main gun loader, distracting him from critical goings-on on the battlefield.

Where the KV-1 lacked was in battlefield mobility. Engineers were key to upgrade all facets of the KV-1 during its evolution, however, they neglected to increase its engine output. This made for a slow and plodding KV-1 devoid of agility and limited in a tactical sense. Considering the wide open plains of the Russian frontier, cross-country mobility was at a premium and the KV-1 disappointed in this area.

The initial KV-1 production models (141 examples produced) eventually gave way to the KV-1A variant of 1940. Original models fitted the short-barreled 76.2mm main gun whilst the KV-1A was completed with the longer 76.2mm F-32 L/41 series and the gun mantlet was now either bolted or welded onto the turret. Operating weight was 46 tons with armor thickness ranging from 37mm to 78mm. The variant was powered by a V-2K series V12 diesel-fueled, water-cooled engine of 550 horsepower to help it reach rather optimistic speeds of 22 miles per hour with a 140 mile range. The vehicle stored 111 x 76.2mm projectiles as well as 3,024 x 7.62mm rounds of machine gun ammunition.

The KV-1A was then superseded along Soviet production lines in 1941 by the KV-1B which added applique armor to a now-cast turret (over armor plates of earlier marks) for improved crew protection. Additionally, some were finished with additional armor along the hull sides and welded armor plating along the critical frontal hull facings, increasing protection by as much as 100mm in thickness. Of course this additional weight worked against engine performance which directly dictated limitations in overall road speeds, cross-country speeds, power-to-weight ratio and engine life. These vehicles weighed in at over 52 tons, sported the standard operating crew of five and were powered by a V-2K V12 diesel fueled, water-cooled engine of 600 horsepower. Top speed was 19 miles per hour (12 miles per hour cross country) with a 155 mile road range. Armament was 1x F-34 L/41 series main gun with 3 x 7.62mm DT machine guns (bow, coaxial and turret rear).

In 1942, the KV-1C was unveiled with armor up to as much as 130mm in thickness. This time, engineers addressed powerplant issues and added a 600 horsepower engine while the hull sat upon a wider track set for improved weight displacement and control. A limited number of KV-1C models were stripped of their added applique armor to help increase their speeds, resulting in the little known designation of KV-1(s) to indicate the jump in "speed". 1,370 S-models were produced.

While a true heavy tank, the ever-changing face of war dictated an improvement in the KV-1's primary armament. An attempt was made to fit a 107mm main gun (and actively trialed) into the design but this endeavor ultimately fell to naught, resulting in simply lengthening the 76.2mm gun barrel.

The KV-1 design culminated in the arrival of the KV-85, a revised interim heavy tank form that mated the KV-1 structure to a more potent 85mm DT-5 main gun (based on an anti-aircraft cannon) in a T-34/IS-1 style cast turret. The bow-mounted machine gun was removed. KV-85s were delivered beginning in 1943 and existing KV-1 tanks were upgraded to this new standard for KV-85 tanks were more or less based on the KV-1C production mark - making the two systems highly interchangeable in terms of engines and running gear. However, the arrival of the T-34/85 nixed the KV-85 legacy for it mounted the same 85mm main gun. The KV-85 weighed in at 45 tons, was powered by a V-2K diesel engine of 600 horsepower and made 21 miles per hour out to 93 miles.

Within time, the KV-1's usefulness had reach its zenith for the T-34 was available in countless numbers and further backed by the improved IS-1 and excellent IS-2 "Josef Stalin" heavy tanks with their stout armor and 122mm main guns. A "KV-13" actually served as the prototype for a redesigned KV tank initiative which directly led to the development of the IS-2. German tank frontline tank offerings included the aforementioned Panther and Tiger I series which proved impervious to the 76.2mm Soviet gun at most frontal angles. The time of the KV-1 has officially come and gone.

The KV-1 chassis was used as a flamethrowing platform as the KV-8. This mated the KV-1 hull with an ATO-41 series flamethrower in the turret as well as a 45mm M1932 gun and some 42 examples of this tank variant were produced. The KV-8S was similar in scope yet fitted the ATO-41 flamethrower in the coaxial machine gun position. A KV-1 prototype - designated as the "KV-14" - fitted the Soviet 152mm field gun onto a fixed superstructure, leading to the development of the SU-152 self-propelled gun system.

The KV-2 was developed in conjunction with the KV-1 and thusly utilized the same hull and running gear but instead mounted a 155mm howitzer in a boxy, slab-sided turret emplacement. This form was used more as a mobile field gun for artillery fire support than a true tank killing machine, meant to work in conjunction with the KV-1. The German Army eventually captured the KV-2 assembly lines and production of the type was never resumed. The KV-2 proved more limiting in its tactical usefulness for its turret was large and heavy, presenting a most ponderous target to enemy guns. Therefore, the KV-1 and KV-2 were decidedly different tank systems within the Red army inventory and is detailed elsewhere on this site. 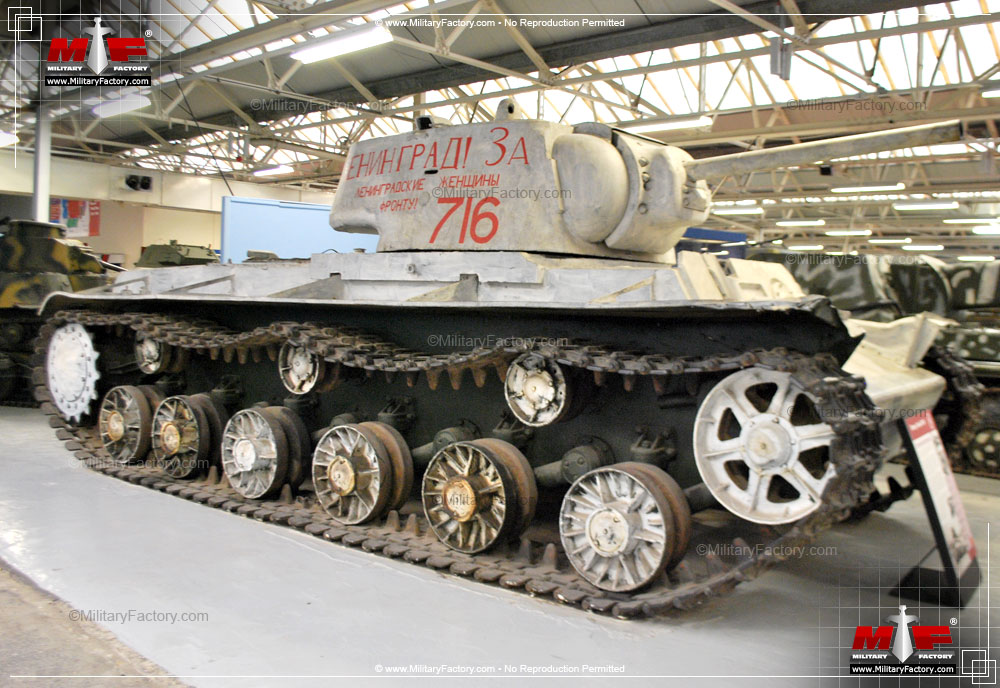 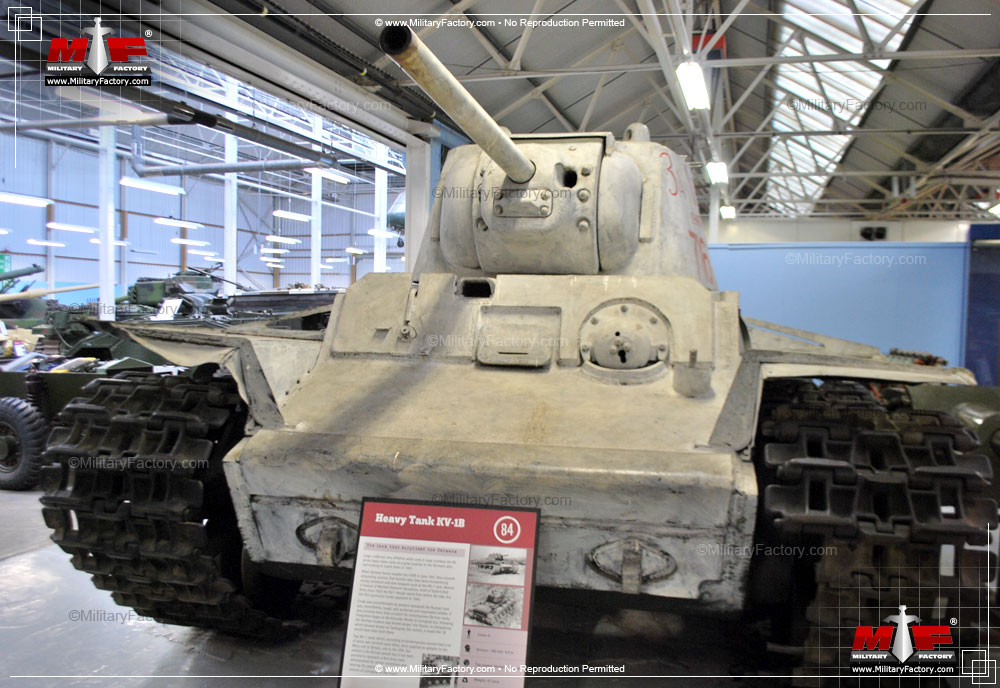 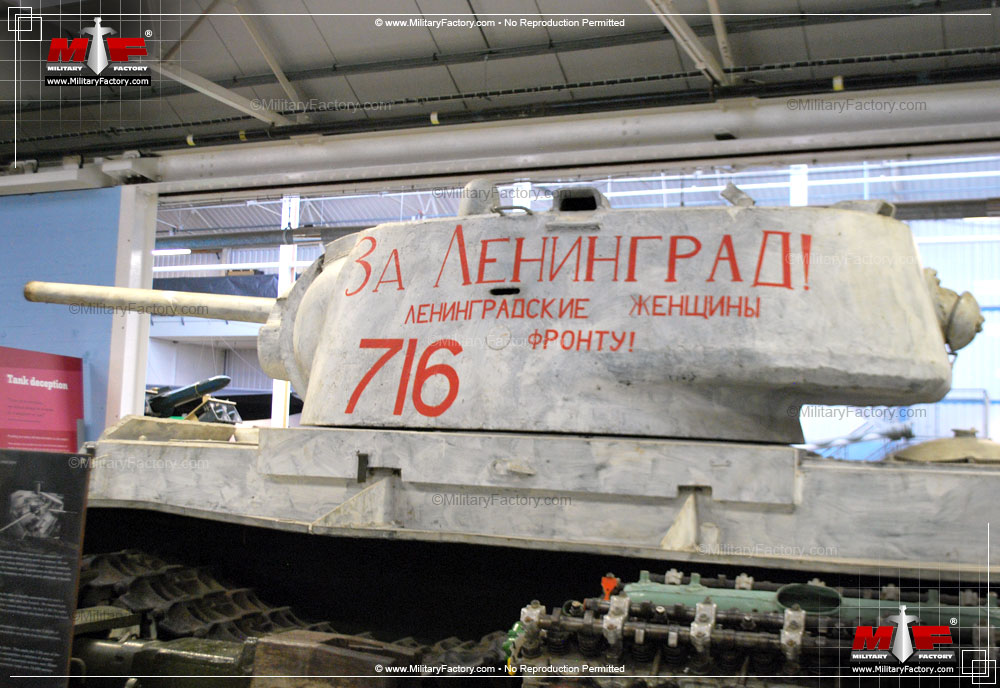 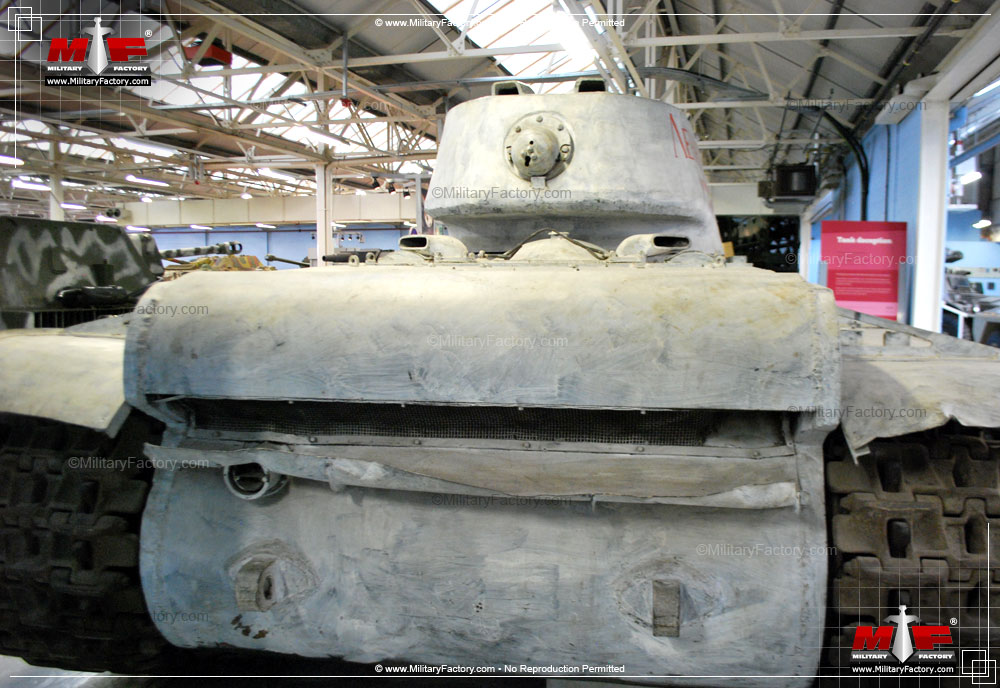 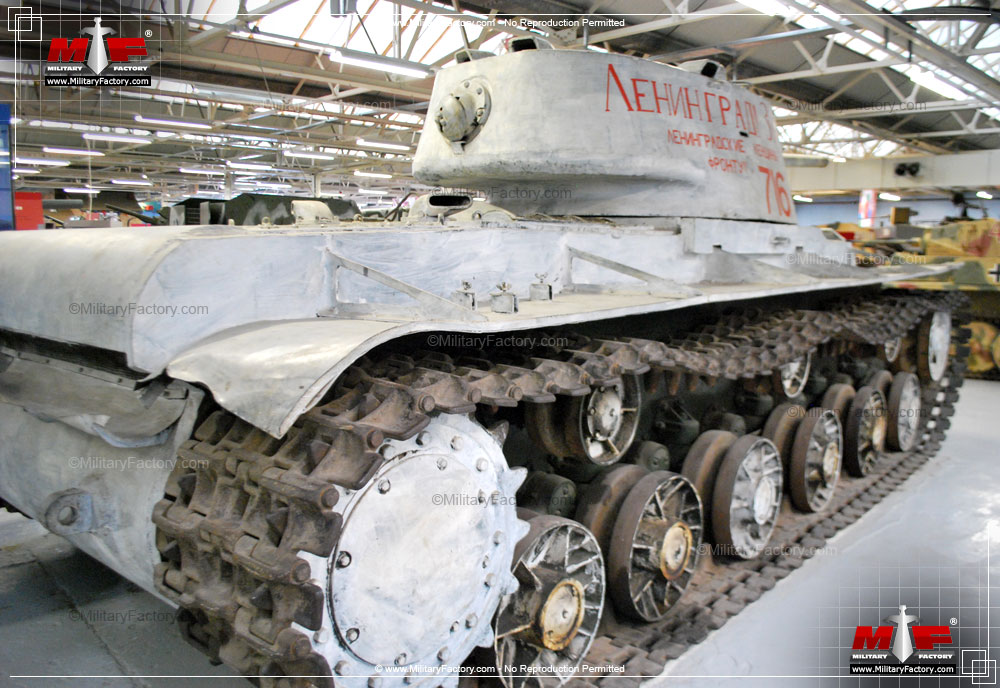 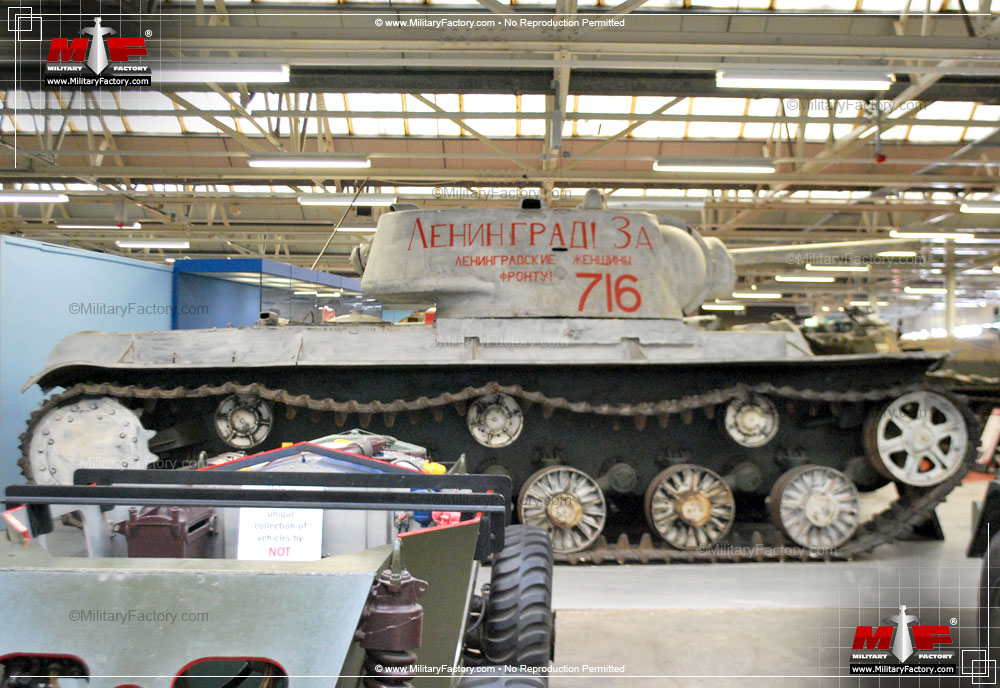