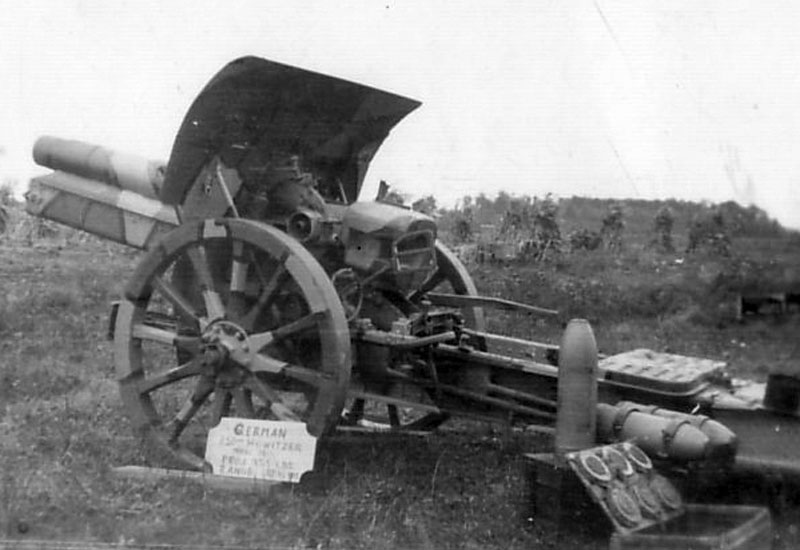 Rear left side view of the sFH 13 towed howitzer

Authored By: Staff Writer | Last Edited: 09/27/2018 | Content ©www.MilitaryFactory.com | The following text is exclusive to this site.
The sFH 13 series heavy field howitzer was of German origin and saw combat throughout World War 1 and even into World War 2. The system was fielded foremost with the German Army in World War 1 (then under the banner of the German Empire) and survived to serve in Hitler's army decades later. Other operators included the Ottoman Empire (dissolved after World War 1), Belgium and the Netherlands. Design of the system began in 1913 by the German firm Krupp and the weapon was fielded from 1914 through 1945 with manufacturing handled by the combined efforts of Krupp, Rheinmetall and Spandau. Some 3,409 examples are thought to have been produced in all. The sFH was ultimately fielded in two distinct forms - one mounting the L/14 short barrel ("kurz") (sFH 13) and the other with the L/17 long barrel (lg. sFH 13). The further designation of lg. sFH 13/02 was used to signify a simplified version for mass production.

Initial sFH 13 production versions suffered from a fragile recoil system that tended to break from the violent forces inherent in the firing operation, this related to a weak internal spring system. A revised version appeared based on a pressurized air system that added some weight but did little to detract from the required operation. Once in practice, the sFH 13 was initially prone to exploding barrels early in their service lives which could kill the crew in the process. This resulted in the series being fitted with a longer barrel as well as some revision to the internal workings.

With the modifications in place, the sFH 13 went on to prove a major asset to the actions of the German Army, particular in 1914, when her main adversaries - the British and the French - held little in the way of matching such a powerful artillery piece. These gun systems were towed into place by whatever means were available (pack animal, car, tractor, etc...) and operated under the professionalism of trained gunnery crews. The design was typified by its multi-spoked metal wheels straddling the gun mount. The wheels were attached to a tow carriage categorized as a "box trail". The gun mount fitted the large-caliber main armament as well as a thin metal shield for relative protection for the crew. Weight was listed at 4,960lbs while her running length measured in at 8.3 feet with the L/17 series barrel measuring 6.9 feet. The fired projectiles consisted of the shell and a charge with each shell weighing in at 93lbs and was of the High-Explosive (HE) variety for maximum shock effect. The gun operated from a horizontal sliding breech block and recoil was contained by way of a hydro-spring variable system. The main gun featured an elevation limitation of +45 to -4 degrees (up-and-down) and a 9-degree traverse (side-to-side). A trained crew could let off up to three rounds per minute while muzzle velocity was rated at 1,250 feet. Effective range was out to 9,400 yards. It was not wholly uncommon for the service life of a single sFH 13 gun to report the firing of some 25,000 shells before all was said and done.

Belgium and Netherlands both received former German Empire sFH 13s as part of the reparations following World War 1. When Germany conquered both Belgium and the Netherlands in the opening rounds of World War 2, the German Army reconstituted their old sFH 13 guns into German Army service under the respective designations of sFH 409(b) and sFH 406(h). Despite their early usefulness, the sFH 13 led a short existence in World War 2, ultimately outmoded by newer and more powerful offerings.

Despite its obvious firepower and reliability, if the sFH 13 series suffered from one drawback it was in her limited range. Nevertheless, she remained highly mobile and could deliver a lethal dose of artillery against even the most dug-in of enemy troops. German Empire generals certainly considered the sFH 13 series as one of their most important pieces of the First World War.

(Not all weapon types may be represented in the showcase above)
Dependent on ammunition carrier. High-Explosive projectiles only.