The Marder II tank destroyer was an antitank conversion based on the PzKpfw II main battle tank series.

Authored By: Staff Writer | Last Edited: 04/06/2017 | Content ©www.MilitaryFactory.com | The following text is exclusive to this site. 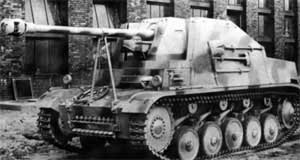 Much like the Marder I before it, the Marder II (Marten II) was a purpose conversion tank destroyer based on an existing tank chassis - this for the Marder II being the hefty supply of outdated Panzer II tank systems. Marder II's formed a large part of German tank destroying units since its inception and would play a vital and prominent role in most every German infantry operation through to the end of the war. The vehicle mounted a the ferocious 7.50cm Pak 40 anti-tank gun - already a proven weapon - and it being a conversion of an existing chassis, was relatively easy to produce in quantity from available stores and still-working Panzer II tank production lines.

The Marder II's design featured the Panzer II tank chassis nearly completely intact with five road wheels to a side. The turret the was removed and a fixed superstructure was added to the hull. The turret was such that it only served to cover the exposed crew from the front with some protection afforded the sides. Other than that, the crew manning the main gun worked atop the engine compartment (now moved to the rear of the Panzer II hull design to offset the weight of the main gun) and was exposed to the elements and battlefield action alike. The forward shield was sloped and offered up a well-concentrated 10mm thickness in armor. With the superstructure being fixed to the hull, the vehicle would have to turn itself entirely to engage a target - a drawback in the event the vehicle ever found itself in a moving battle. Otherwise, a properly placed and supported Marder II could wreak havoc on Allied armor at will.
Advertisements

The primary weapon of the Marder II in prototype form was initially a 5-cm (1.97") main gun. This was upgunned with the addition of the PaK 40/2 7.5-cm (2.95") main gun (based on the proven PaK 40 standard German anti-tank weapon and replacing the Soviet 7.5-cm guns found in early Marder II's) now found in the Marder II production models. Self-defense was provided for by a single anti-infantry 7.92mm machine gun operated from the top of the open turret emplacement. 37 x 7.5-cm projectiles were carried aboard for the main gun while 600 rounds of 7.92mm ammunition were made available. A crew of four was optimal though a crew of three could suffice.

Performance was optimal with the single Maybach brand HL 62 TRM gasoline engine developing 140 horsepower. This allowed for a top speed of 40 kilometers (nearly 25 miles per hour) to be reached, a gradient of up to 57% to be traversed and fording of nearly 3 feet to be accomplished. Range was a smidgeon under 120 miles which was adequate considering the type most likely traveled with a contingent of infantry and other armored units. Weight was generally between 10,000 and 11,000 tons.

The Marder II appeared in an early version formally known as the Sd.Kfz 132, this armed with captured Soviet 7.62-cm guns. This particular version was based on the available Panzer II Ausf D and E models along with a handful of Flammpanzer units thrown through the conversion process as well. Production of over 200 of these ran from 1942 into 1943. This series was followed by the Marder II (formally known as the Sd.Kfz 131) and was modeled on top of the Panzer II Ausf A, B, C and F models. A revised superstructure was used in this new production model which sported a version of the PaK 40 anti-tank gun. Other than a few refinements, the change of armament was most significant.

Marder II's were used in number primarily on the Eastern Front. Thier combination of mobility (thanks to the Panzer II pedigree) and firepower (thanks to the proven 7.5-cm German gun) proved invaluable on this changing mobile front. The strength of the system lay in achieving a high first-hill kill probability as the system was not really suited for open warfare against armor or most other offensive weapons. The main gun was more than capable of penetrating most Allied armor apart from the heavy tanks of Russia. If the Marder II had a weakness it was in the fact that even a nearby artillery strike, anti-tank round or air strafing could knock out the gun crew and / or the vital engine components. Personnel sitting within the hull were the only ones offered any amount of protection away from the front of the Marder II. Production of the Marder II system as a whole ran into 1944 and elements saw service into the final days of the war even though the classification was dropped in favor of purpose-designed tank killers.
Advertisements

(Not all weapon types may be represented in the showcase above)
37 x 7.5-cm projectiles
600 x 7.92mm ammunition 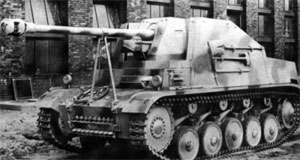