Calliope systems were popularized in World War Two, though their battlefield effectiveness was subject to debate.

Authored By: Staff Writer | Last Edited: 05/31/2019 | Content ©www.MilitaryFactory.com | The following text is exclusive to this site. 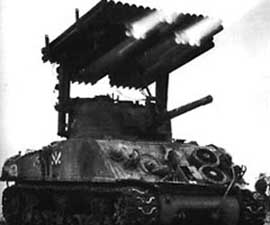 The attempt to mate a multiple rocket launching system to a vehicle was nothing new by 1944. The Soviets were already finding successes with their Katyusha launchers against the Germans, who in turn had been fielding their Nebelwerfer weapons for some time. The general idea was to launch massive amounts of high-explosive munitions at distance against entrenched foes. Accuracy was of some concern though the sheer psychological effects of such a weapon lead some to believe this to be their only battlefield advantage. As a whole, the idea can be of under some debate as to the effectiveness of the Calliope system in a war planner's tool chest.

The Sherman Calliope first appeared onto the scene in France in 1944 as the T34 Calliope system. The system featured 60 x 107mm tubes mounted above the standard Sherman turret and operated directly with it in terms of elevation and direction. The rockets could be engaged from within and fired all at once.

Calliope systems offered up a large amount of indirect firepower with very little modifications needed to the system carrying it. The system need only be stationary and have the firing systems onboard. As such, rocket launching systems of all types were used throughout the war, mated to armored chassis, trucks and jeeps.

The Sherman Calliope appeared in various forms throughout the latter stages of the war - many never seeing combat. The few that did offered up modest successes and were showcased in Europe and the Pacific. The T40 "Whiz Bang" Sherman became the most identifiable of the type and saw combat action in the final year of the war. The T99 became the only Sherman Calliope system to feature a permanent Calliope fitting onto the standard Sherman tank turret.
Advertisements

(Not all weapon types may be represented in the showcase above)
Dependent on configuration. 10 to 60 rocket projectiles of various caliber. 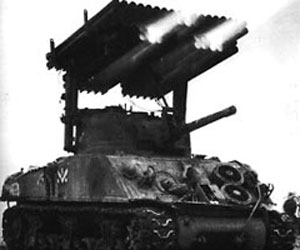