Authored By: Staff Writer | Last Edited: 03/09/2020 | Content ©www.MilitaryFactory.com | The following text is exclusive to this site. 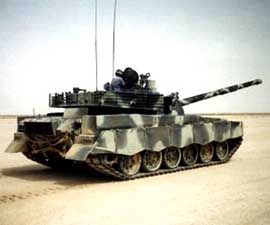 The Al-Khalid is essentially a hybrid tank design with systems, armament and subsystems originating from a variety of global sources though the tank system itself, as a whole, is a locally-produced product native to Pakistan. Its indirect lineage can be traced back to the Soviet Cold War-era T-54 series while its direct lineage stems from the Chinese NORINCO Type 90-II main battle tank. Additionally, engines are of Ukrainian origin while production is handled within Pakistan. In most respects, the Al-Khalid can be viewed as the "ultimate" evolution of the successful Soviet T-54 system.

Design on the Al-Khalid ran through most of the 1990's to which the system was then known as the "MBT 2000". Design was handled on both the part of NORINCO Factory 617 of China and Heavy Industries Taxila (HIT) of Pakistan with a partnership officially inked in January of 1990. Prototypes appeared the following year and went into evaluation. At the core of the new tank design was to be ease-of-production, a system that could readily accept the use of foreign powerpacks.

There appeared four major prototypes designated simply as P1, P2, P3 and P4. Each was differentiated mainly by their selection of powerplants. The P1 sported the German-based MTU-396 diesel engine mated to an LSG-3000 automatic transmission while fielding a Chinese-made 125mm main gun, fire-control system and autoloader. The P2 was similar in scope but with a Perkins Condor 1,200 horsepower diesel engine (used in the successful British Challenger MBT series), a French SESM ESM500 (ala the Le Clerc MBT) and western-based fire-control system. The P3 sported a Ukrainian 6TD-2 1,200 horsepower engine but essentially the P2 prototype. The P4 was given the NATO-standard 120mm main gun tied into a western-based fire-control system along with a German-based MTU-871/TCM AVDS-1790 diesel engine with LSG-3000 automatic transmission. The P4 was intended to become an export product for Pakistan to produce, operate and sell to other prospective global buyers.

P2's Challenger-based engine proved too temperamental for the rigors of desert warfare and was ultimately too expensive for a long-term powerpack solution. The P4 saw its demise when an arms embargo was placed against Pakistan for their testing of a nuclear weapon in 1998. As such, the P3 with her Ukrainian powerplant proved the best for both cost and operations in the hot Pakistani climate. The new tank system was born under the Chinese designation of "Type 90-IIM" (showcasing its obvious lineage to the NORINCO Type 90-II model) along with an export designation of "MBT 2000". In Pakistan, the tank took on the name of "Al-Khalid".

Pakistan received much experience in its two major Indo-Pak Wars against India resulting in a nation that was now more or less knowledgeable about what it wanted in their next main battle tank. Pakistan had already been granted license-production rights to the Chinese Type 85-IIAP series and manufactured the type through Heavy Industries Taxila (HIT), to which the experience in this type of industrial-size, heavy duty manufacturing proved priceless to Pakistan's future within localized production of armored vehicles. As such, HIT was tabbed for producing the new Al-Khalid and the tank entered service with the Pakistani Army in 2001 with local Pakistani production continuing even today. It is expected that some 600 total Al-Khalids will be delivered to the Pakistani Army by production's end.
Advertisements

Externally, the Al-Khalid shares a conventional design consistent with most modern main battle tanks. It offers up a low profile thanks to its rather short turret height. The glacis plate is very shallow and side armor is augmented through the use if skirts. Six road wheels are fitted to a side. Crew accommodations amount to three personnel as the loader position is done away with. The driver is seated in the center of the forward hull while the gunner and tank commander take their positions in the turret. Armor is composite in construction and is expanded to include Explosive Reactive Armor for increased protection.

The engine is mounted at the rear and consists of a Ukrainian-based KMDB 6TD-2 6-cylinder diesel-fueled engine delivering up to 1,200 horsepower. The engine provides a top speed of 70 kilometers-per-hour with a range of 400 kilometers. The powerplant is tied to a SESM ESM500-series 5-speed transmission system. Suspension is accomplished through a torsion bar and hydraulic damper arrangement.

Primary armament of the Al-Khalid centers around the powerful 125mm smoothbore main gun nestled into the center of the turret face. Consistent with Russian tank designs throughout recent history, the Al-Khalid does away with the main gun loader as a crewmember and instead employs a complicated but effective automatic loader in his place. Anti-aircraft support is handled by the tank commander through an externally-operated 12.7mm heavy machine gun mounted on the turret roof. A 7.62mm anti-infantry machine gun is mounted co-axially on the turret face next to the main gun. Six smoke grenade dischargers are fitted to either turret side and a capable laser range finder, laser detection system and NBC protection are all standard to base Al-Khalids.

As of this writing (2015), over 600 examples of the Al-Khalid have been produced. The primary production model is the Al-Khalid based on the NORINCO prototype fitting the Ukrainian KMDB 6TD-2 diesel engine (P3). The Al-Khalid I represents an upgraded model with revised systems, engine, autoloader, and armor scheme as well as the ability to fire KOMBAT anti-tank guided missiles. Al-Khalid II is an upgraded variant with reivsed turret, upgraded armor package, improved projectiles and sensor equipment, increased situational awareness, increased combat weight, and new engine. 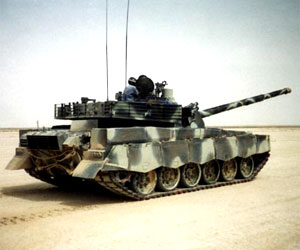