The French Canon de 274 modele 87/93 Glissement was a World War 1 veteran that saw service in World War 2, ending its days under German control.

Authored By: Staff Writer | Last Edited: 08/18/2021 | Content ©www.MilitaryFactory.com | The following text is exclusive to this site. 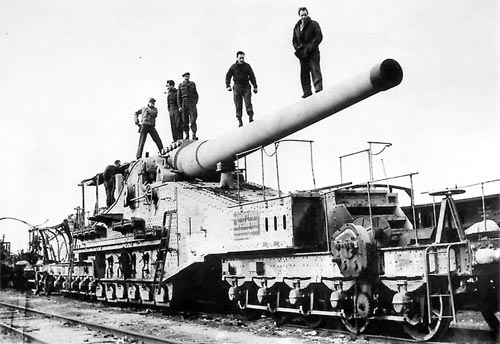 By the time of World War 1 (1914-1918), artillery retained its status as king of the battlefield and this became evermore important once the war bogged down into massive networks of trenches running across the European countryside. This prompted warplanners to feature artillery in ever-greater numbers in ever-greater sizes to help dislodge stubborn enemy forces from their well-defended positions. Since air support had not matured to useful levels and large-caliber weaponry was mainly restricted to warships of the time, considerable thought was eventually given to creating massive land-based guns utilizing the mature railway network of Europe.

As such, railway guns gained in popularity during this time with the French leading the way (the British, Germans, and Americans would follow suit with their own designs before war's end). One of the French contributions of the period became the "Canon de 274 modele 87/93 Glissement", a development that appeared during the fighting of World War 1 (1914-1918) and managed an existent even into World War 2 (1939-1945) where it eventually fought under the German flag before their last days were had.

The guns were manufactured by the storied Schneider concern, which was a proponent of such large-caliber weapons even before the arrival of The Great War in July of 1914. As many as sixteen were ultimately built during the production run taking place during and after World War 1.

At their core, the weapons were 155 ton monsters, showcasing an overall length of 85 feet with the barrel measuring 40 feet long. The original caliber was 274mm (10.8" / 27.4cm) but this would later be adjusted as the barrel assemblies wore down. The projectile in play weighed between 475lb and 565lb, relying on a separate 149lb loading bagged charge. Three different projectile types were used: an Armor-Piercing Capped (APC) version and a Semi-Armor Piercing Capped (SAPC), both weighing 562lb, and the Common Incendiary (CI) model tipping the scales at 476lb.

The breech mechanism was of interrupted screw design and the integrated recoil device was designed around the sliding principle. The carriage featured twin five-axle rail bogies, the bogies divided across two swiveling sections featured fore and aft of the gun carriage section proper - the carriage residing amidships. The mounting hardware offered an elevation span of +5 to +40 degrees though, since no traversal was offered by the mount, sections of curved track were needed (these pre-laid by the multi-person crew) for more precise aiming. A trained crew could fire off one round every four minutes out to a range of 16.4 miles (26.4 km) at a muzzle velocity of 2,600 feet-per-second. Effective range was closer to 15 miles at the full 40-degree elevation reach.

The French Army received four of the new guns in time for the fighting of 1917 and these saw extensive service though three were lost in the process. The barrels degraded to the point that they were rebored to revised calibers, 285mm and 288mm, and, as a result, all-new projectiles were manufactured and issued to take advantage of the change. The war ended in November of 1918 with the Armistice.

In the post-war period, additional guns were completed by Schneider and these were stored by the French Army as insurance against any future potential conflict with its neighbors. The guns were given the revised designation of "Canon de 274 modele 1917 a Glissement".

With the arrival of a new World War in Europe, the French Army reactivated its existing stock of Canon de 274 modele 1917 railway guns for the defense of France, once again to defend itself from its belligerent neighbor. However, these had a minimal affect on the quick German advance and six of the weapons ended their days in German hands under the revised designations of "27.4cm K(E) 591(f)", "27.4cm K(E) 592(f)", and "28.5cm K(E) 605(f)" - the lowercase "f" signifying their French roots.

One of the guns, E.692, was stationed at Sudwall as a coastal defense system by 1944 to protect the Rhine River estuary. After the Allied amphibious operation on August 15th, 1944 through "Operation Dragoon", the gun was ordered to retreat through the Rhone Valley. Their advance was eventually hampered by Allied air attacks which sought to destroy Axis-controlled bridges. Another example was captured by U.S. troops near Rentwertshausen on April 10th, 1945.

The value of the railway gun was always in question considering the investment-versus-return. Often times, the railway network proved restrictive and the slow rate-of-fire of the weapon hampered their tactical and strategic value even more. In addition to this, accuracy was never a strong suit of such designs - it was only when the massive shells hit that the true value of the weapon system was known as the target / target area was typically obliterated. Before the end of World War 2, the Germans had shifted their strategy to the V-2 ballistic missile which, despite suffering its own accuracy issues, went on to terrorize Londoners for some time. The Army continued their focus on production of conventional tanks which were more mobile and could be produced in quantity for more precise battlefield results.

The age of the railway gun was more or less over.
Advertisements 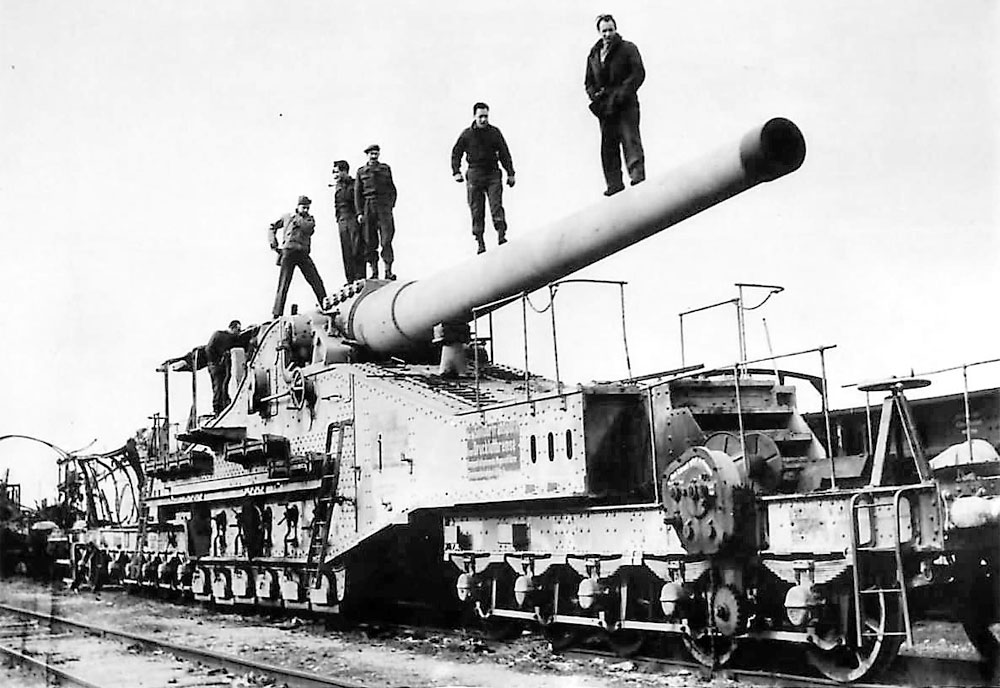 Battlefield developments of similar form and function, or related to, the Canon de 274 modele 87/93 Glissement...