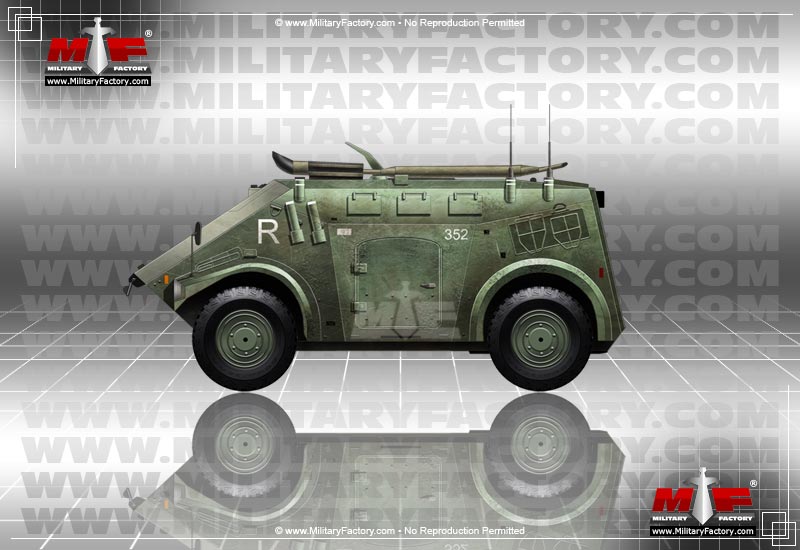 The Panhard M3, introduced in the early 1970s, saw considerable success in the foreign market where its type was well appreciated.

Authored By: Staff Writer | Last Edited: 07/08/2019 | Content ©www.MilitaryFactory.com | The following text is exclusive to this site.
Like many other low-risk, light-armored vehicles, the Panhard M3 was developed as a private venture by the French company in an effort to generate interest in the export market. The compact vehicle, built atop a 4x4 wheeled arrangement, went on to become a relative success with over 1,200 units built and seeing operations /service all over the globe. The M3 continues in service today (2017) and has seen combat exposure as recently as the Yemeni Civil War (2015-Present). It has proven serviceable as both a military- and security-minded vehicle.

Panhard M3 Development and Production
The pilot (prototype) model appeared in 1969 and underwent the usual trials and certifications before production commenced in 1971. To keep costs under control and maintain logistical friendliness with other Panhard products, the M3 was given up to 95% commonality of parts with the Panhard AML vehicle (detailed elsewhere on this site). Production spanned from 1971 until 1986 and a plethora of foreign operators soon emerged - running from Abu Dhabi and Algeria to Togo and Yemen. Customer concentration was mainly on the continent of Africa where the vehicle proved to be versatile, cheap-to-procure and easy-to-maintain.

M3 Walk-Around
The M3 was given an all-welded steel hull construction allowing protection against small arms fire. Its base crew was two but there was provision for carrying an additional ten in the passenger compartment. Access to the vehicle was through a collection of hinged doors located at the sides (single doors) and rear of the hull (twin doors). The driver, seated at middle-center in the bow, was given a dedicated access hatch. The vehicle commander took up a position in the center-middle and was afforded his own roof-mounted hatch. This position sometimes displayed a complete turret with armament or pintle-mounted machine guns as needed. There were also smaller hatches at the side roof lines for occupants to engage outside parties with their personal small arms. Armor protection reached between 8mm and 12mm at the various facings.

Armament
Armament fits were variable and highly dependent upon customer needs / requirements. One version saw the vehicle carry a twin-gunned turret featuring 2 x 7.62mm FN MAG machine guns while another was fielded with a single 7.62mm machine gun but carried 3 x LRAC F1 anti-tank rocket launchers (detailed elsewhere on this site). A simple ring sometimes would take the place of a full-fledged power-operated turret and, in this case, the turret could seat a 7.62mm or 12.7mm machine gun or an 20mm automatic cannon. Another form mounted a 20mm autocannon in an enclosed turret. An anti-tank version of the vehicle was outfitted with 4 x HOT Anti-Tank Guided Missiles (ATGMs) for the tank-killing role and the anti-aircraft counterpart (M3 VDA) had 2 x 20mm autocannons for the airspace denial role. A secondary 7.62mm machine gun could also be fitted over the rear hull of the vehicle to protect the vehicle's "six" from approaching dangers.

Power, Performance and Specs
The vehicle was given a decent amount of ground clearance for its role at about 14 inches. The tires were well spaced at each corner of the hull and a spare was carried over the starboard side of the hull wall. Drive power was from a Panhard 4HD engine of 90 horsepower output. This allowed the vehicle to reach road speeds of 56 miles per hour out to ranges of 370 miles. Structurally, the M3 had an overall length of 4.4 meters, a width of 2.4 meters and a height of 2.4 meters. Its weight is 6 tons.

Panhard M3 Variants
Primary variants to emerged include the M3 VTT personnel transport, the M3 VDA anti-aircraft vehicle, the M3 VAT repair platform, the M3 VPC command vehicle, the M3 VLA engineering vehicle, the M3 VTS battlefield ambulance and the M3 VSB radar carrier. The M3 VPM has a turret-mounted 81mm field mortar and the M3 VTT 60B uses the 60mm CM60A1 mortar. The Saymar M3 APC is an Israeli-modified model. The Irish Army upgraded their M3s in the mid-1980s to feature the Peugeot V6 gasoline engine of 140 horsepower. At least fourteen were brought up to this standard (some forty-four M3 vehicles were taken into service overall).

Powerplant: 1 x Panhard 4HD gasoline-fueled engine developing 90 horsepower driving conventional four-wheel arrangement.
(Showcased performance specifications pertain to the base Panhard M3 production variant. Compare this entry against any other in our database)
Variable depending on mission role. Some forms armed simply with 7.62mm / 12.7mm machine guns in open mounts. Others have turreted machine guns. Still others are optimized for the AA or AT roles and carry 20mm autocannons and missiles.