The Sherman Jumbo was an upgunned and uparmored version of the war-winning base M4 Sherman medium tank.

Authored By: Staff Writer | Last Edited: 06/01/2019 | Content ©www.MilitaryFactory.com | The following text is exclusive to this site. 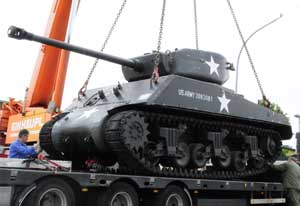 Long before the Invasion of Normandy in northern France was finalized, American warplanners were aware of the fact that the Germans would be ready to fight a determined defensive battle from coast to Berlin. They would be well armed, well prepared and well situated to take on any Allied advance heading their way through their skillful use of tanks, upgunned armored vehicles and towed artillery systems placed at strategic chokepoints. The requirement, therefore, would be for an "assault tank" to make its way through the enemy front and dislodge or destroy the prepared enemy at the heart of the defense. As such, the Americans knew that they would need a tank of some superiority in terms of armor protection and lethal armament - something beyond the current offerings of the time. With the M26 Pershing already in development, the hope was to have the new heavy tank ready to go to war by late 1944. However, all was not proceeding as planned and the M26 was delayed from arriving in Euopre until 1945. As such, other stopgap solutions were entertained.

US authorities took what it already had in some number, the M4 Sherman medium tank, and began a process of uparmoring the beast for the dedicated assault role. The engine remained the Ford V8 GAA series powerplant though the gearbox was altered to compensate for the added weight of the extra armor. Of course the additional armor also served to bring down the operational speed of the base Sherman design - normally a stately 25 to 30 miles per hour - now degraded to 22 miles per hour. The front hull of the tank received no less than 5.5 inches of armor thickness and protected the valuable drive train system. The upper front hull retained its base Sherman angled facing as it served well to combat incoming enemy projectiles, measuring 4.5 inches at its thickest. The glacis plate was protected by up to 4 inches of armor while the turret was revised to 6 inches of protection. Up to 7 inches of armor was used around the gun mount and 1.5 inches of rolled armor was utilized over the superstructure sides. Although initially intended to carry a 76mm main gun, the production form of the new Sherman fitted the standard 75mm main gun due to its proven characteristics when firing its High-Explosive (HE) projectile. 106 projectiles of 75mm ammunition could be stored about the hull and the new turret, allowing the crew to sustain fire for periods of time. Anti-infantry and aircraft defense was from the M4 standard, made up primarily of a 0.50 caliber heavy gun on the turret top, a 0.30 machine gun in a coaxially fitted mount next to the 75mm main gun and a 0.30 caliber machine gun in a bow mount at the front right face of the hull, opposite the driver's position, manned by the radio operator. All told, the vehicle weighed in at 42 tons and suspension remained the base Vertical Volute Spring Suspension (VVSS) system found on other Shermans. Its operators were therefore warned to proceed with some caution when utilizing the new tank in a cross-country setting, the suspension system being prone to failure under the added weight.

In March of 1944, the US government inked a deal that would bring it some 254 of the modified Shermans to life to which the Ordnance Committee applied the designation of "M4A3E2" to the type - "E" signifying the type as an "experimental design". Production of the upgraded Sherman commenced at light speed to help get the armor up to the front lines as quickly as possible. By late 1944, the M4A3E2 was already being delivered into the eager hands of awaiting American tank crews and commanders in Europe. The new mount was christened the Sherman "Jumbo" by her crews to signify its improved, oversized stature.
Advertisements

Traditional operating tactics held that US tank formations proceed in columns for a quick response to enemy action and offer lesser approaching targets to the awaiting enemy. Once the enemy was located, the column could then fan outwards and call upon a more uniformed response. With the Jumbo now in inventory, the heavily armored system was called upon to head up such column formations and absorb the first volley that the awaiting enemy had to offer - volleys that would have traditionally annihilated base Shermans in the same role.

Once in action, the Jumbo performed admirably well to the point that they were being requested by both commanders and tank crews. Even American General George S. Patton himself went on the request list. When the need went unfulfilled, he quietly gave the order to strip any non-functioning M4 Sherman (those with welded hulls) of its armor and upgrade existing Shermans to something like the new "Jumbo" standard. As such, the M4A3(76)W and M4A3(76)W HVSS systems in his stable were uparmored "in-the-field" thanks to the ingenuity of Army welders and those local European craftsmen hired by the military. Even armor from cast-off enemy German tanks was used in the endeavor, leaving these Shermans as a collective eclectic group of medium tanks with no original Sherman "face" to be found among them. These quick-field conversions went on to be known as "Expedient Jumbos" and some 100 existing M4s were converted to Sherman Jumbos in the short span of three weeks. Ultimately, the Jumbo did see her 75mm main gun give way to a more powerful 76mm caliber, completing her metamorphosis from medium tank to legendary war winner. The Sherman Jumbo proved instrumental in reaching pinned 101st paratroopers at Bastogne, Belgium during the Battle of the Bulge - the 101st having always denied the idea that they needed rescuing from Patton to begin with.

With the Allies advancing against Germany in the west and the Soviets taking Berlin in the east, Adolf Hitler committed suicide in his underground Berlin bunker in mid-April. While an air war still raged over the skies of Germany to an extend into May and pockets of German resistance still waged war, the war in Europe was essentially over, made formally so by early June. This left the world with the task of taking down the Empire of Japan in the Far East, to which the Sherman Jumbo, and all her fast conversions, were shipped back stateside in preparation for the ultimate invasion of the Japanese mainland out in the Pacific. However, Japan capitulated after a lengthy failed sea campaign, a determined Allied bombing effort that decimated morale, infrastructure and mar-making capabilities and the two American atomic bombs dropped on Hiroshima and Nagasaki. The surrender of the Empire of Japan in August of 1945 completed the Second World War in whole by September.

With the war over, production of most war-goods was curtailed or ceased altogether. Much of the war time equipment remained for training or was placed in storage. Some 96 Sherman Jumbos were still in the US inventory in 1948, this out of the 50,000 or so Shermans produced in all.
Advertisements 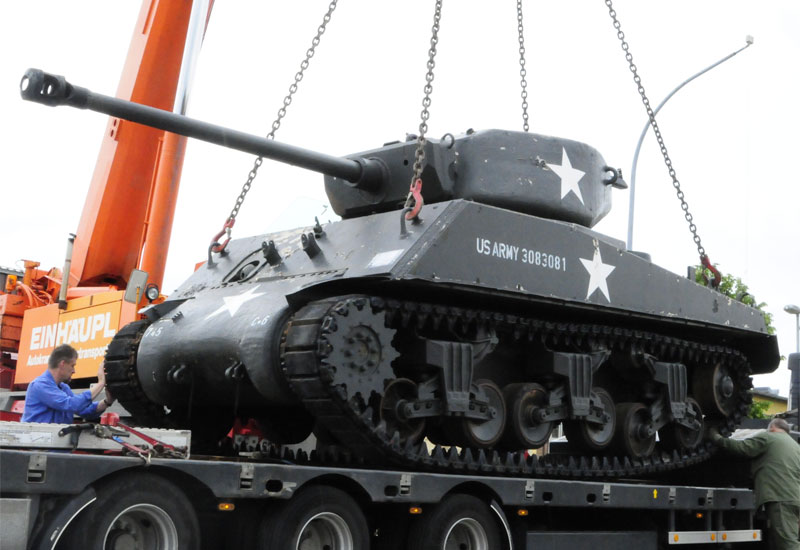 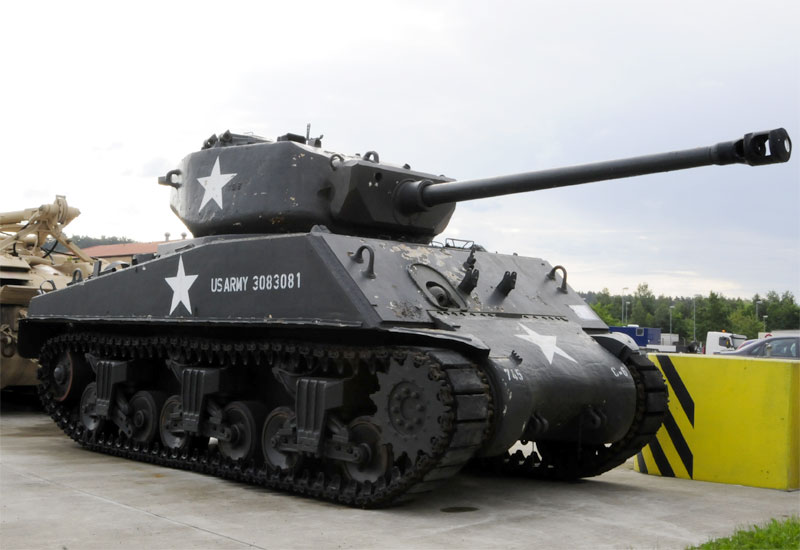 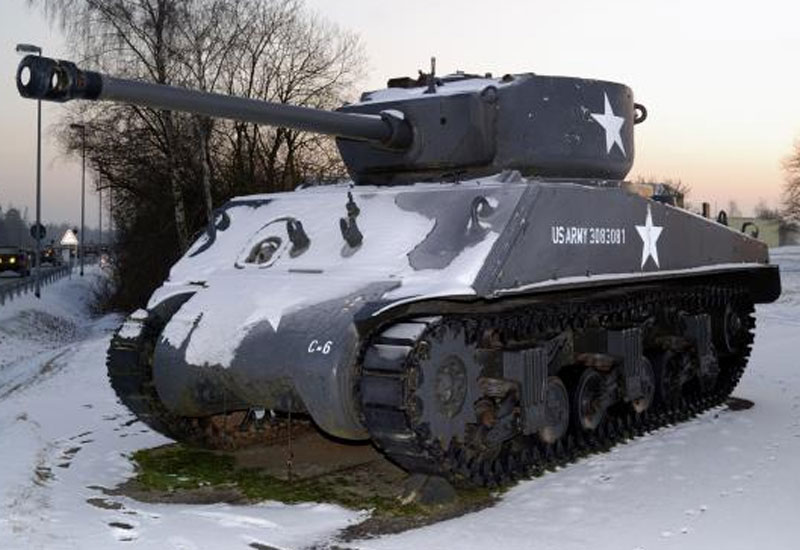 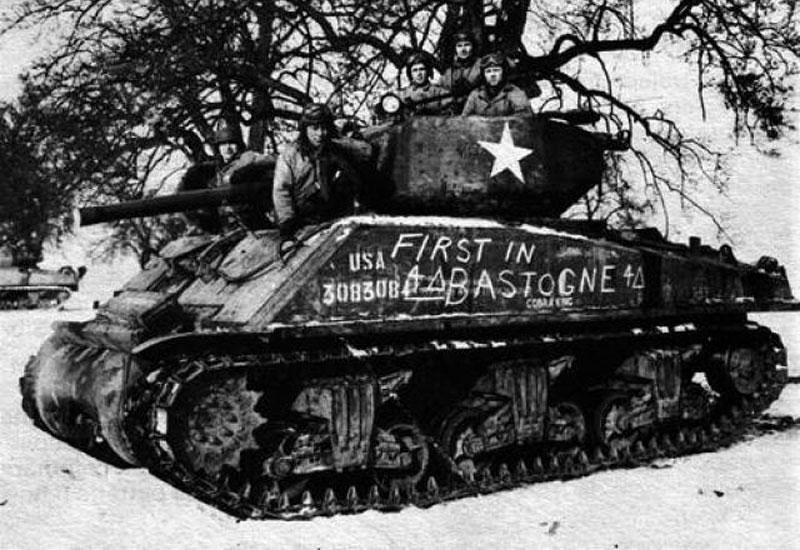