The Renault UE Chenillette was utilized by several world powers as a tracked prime mover for artillery systems.

Authored By: Staff Writer | Last Edited: 02/08/2019 | Content ©www.MilitaryFactory.com | The following text is exclusive to this site. 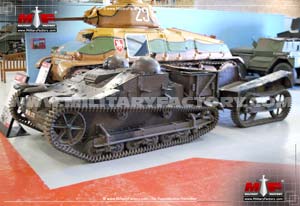 Since the advent of battlefield artillery there stood the challenge of making these weapon systems more transportable. In the early period, horses, mules and other "beasts of burden" were used for the task but it wasn't until mechanized warfare became the norm in the post-World War 1 years that "prime movers" emerged as vehicles given the specific role of towing / moving / pulling artillery pieces about the battlefield.

For the French, during a period of massive rearmament, there appeared the UE Chenillette by Renault in the 1930s, a light-class, track-and-wheel vehicle that quickly became a fixture of French infantry division formations heading into World War 2 (1939-1945). It saw service through the end of the conflict and under a number of national flags.

The UE Chenillette was developed to a French Army requirement that appeared in 1930 and Renault won the contract the following year. Trials involving pilot vehicles then followed in 1931 and serial production would span from 1932 to 1941. Some 5,168 were produced by the French with another 126 examples emerging from license-production in Romania. While the prime mover was designated the "Renault UE", the accompanying trailer section became the "Renault UK".

The Renault UE was a diminutive vehicle with an extremely low profile and seating for two (a driver and vehicle commander in a side-by-side arrangement. The engine was fitted to the front of the hull (between driver and commander) under a shallow glacis plate and, at the rear of the hull, was an open-air, tilting storage box (controlled by the operators). The track-and-wheel arrangement, influenced by the British Carden-Lloyd tankette design, was set to the sides of the hull in the usual way and featured the drive sprocket at front with the track idler at rear and two return rollers along the top to help guide the track links along. Three double-wheeled bogies were used along the bottom. Armor protection reached between 6mm and 9mm at the various facings - offering only limited protection against small arms fire and artillery spray.

The open-air trailer section was of a simpler overall design with four roadwheels surrounded by a short length of track. A flexible joint allowed the two sections to operate independently and thus promoted a reduced turn radius.

Internally the driver's position held a basic instrument panel offering the usual operating details along with hand controls and foot pedals. No communications system was fitted which limited the tactical value of the machine. Since the vehicle's profile was quite shallow, the crew could not "button up" within the protective shell of the vehicle so retractable armored blisters acting as "hoods" were used to protect the exposed heads of the occupants. These were finished with vision slits offering some situational awareness but more often than not restricted vision altogether.

Power stemmed from a single Renault 4-cylinder, water-cooled gasoline engine of 38 horsepower output. This was coupled to a transmission system featuring six forward speeds and two reverse. Travel range of the vehicle was out to 80 miles (down to 35 miles cross-country) and road speeds could reach up to 21 miles per hour. Suspension was by a leaf spring arrangement not unlike those already seen in Vickers armored vehicles. The 3-ton vehicle could also ford up to 16 inches of water.
Advertisements

Initial French Army models were the "Chenillette Modele 31" but growing unrest in Europe caused the service to seek out an improved form of the product should war with Germany come to pass. Renault responded with the "Renault UE 2" and this variant introduced a new transmission system, night lights and reinforcement of various internal components for a more robust end-product. The design was approved and Renault amended its already-running production lines for the new mark in 1937. As such, the formal French Army designation for the type became "Chenillette de Ravitaillement d'Infanterie Modele 1937 R" and production would be handled by various brands including AMX and Fouga.

The UE Chenillette was always intended for the tactical resupply role and not a direct combat vehicle but Renault showcased a machine gun-armed version to increase the appeal of the UE Chenillette as a fighting vehicle to both local and foreign interested parties. This initiative was of limited commercial success, however, but some of the little tanks were armed by the French in the desperate defense of their homeland following the German invasion of May 1940 (the Battle of France). Those examples surviving the German onslaught and subsequent occupation were kept on by the Vichy French government for local defense.

The Germans captured between 1,200 and 3,000 of the vehicles (sources vary) after the French surrender and largely used these specimens in their intended role of artillery moving. Some of the stock were armed through various tank-killing guns such as 37mm and 50mm types up to the German 75mm and captured Soviet 76.2mm types and used as converted tank destroyers and self-propelled guns. A number were also passed on to allied Italy during the war. During 1944, German General Rommel ordered some of the existing UE Chenillette tanks at his disposal to be modified as self-propelled grenade launchers.

(Not all weapon types may be represented in the showcase above)
Dependent upon armament fit (if any). 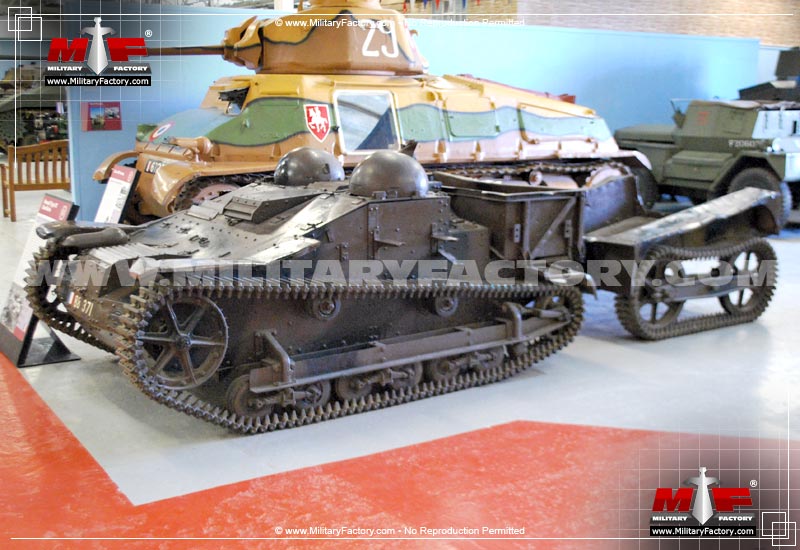 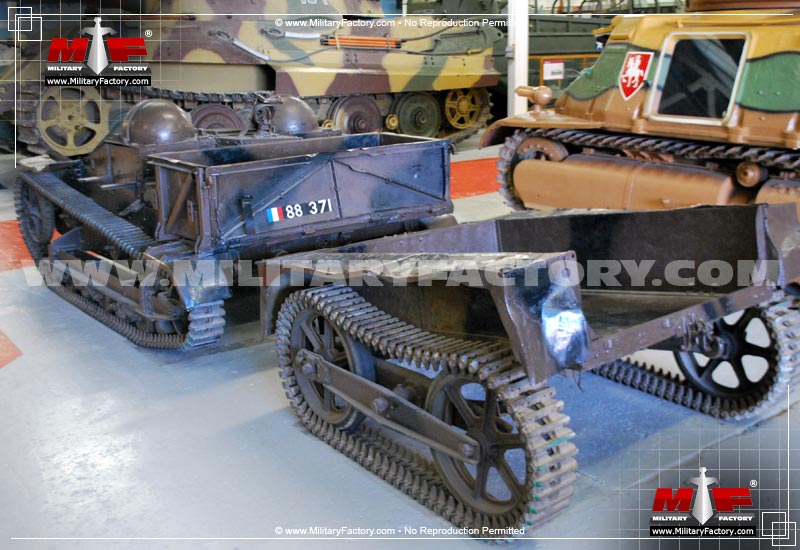 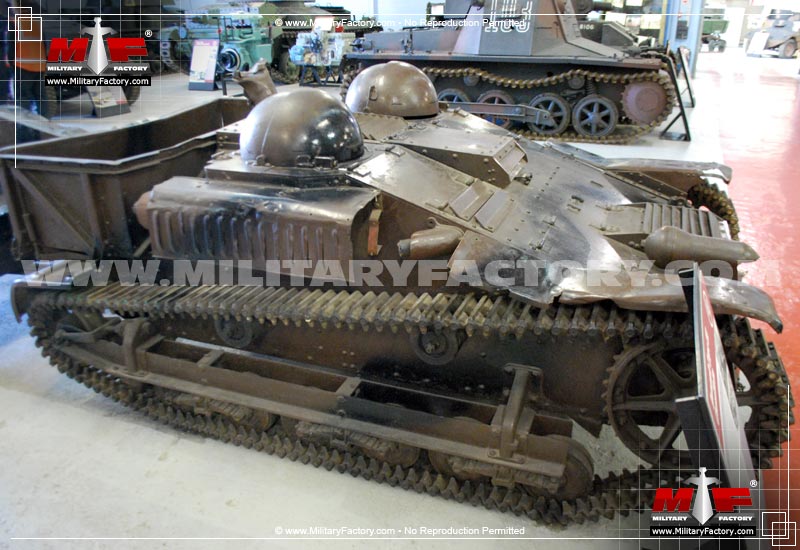