The DRDO AURA unmanned combat air vehicle is in the early stages of development.

Authored By: Staff Writer | Last Edited: 07/06/2022 | Content ©www.MilitaryFactory.com | The following text is exclusive to this site. 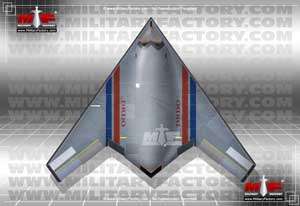 The "AURA" is an Unmanned Combat Air Vehicle (UCAV) currently under development by DRDO (Defence Research and Development Organization) for probable procurement in the Indian Air Force (IAF). The design is an all-wing concept similar to the Boeing "Phantom Ray" UCAV, featuring a defined triangle frontal section, swept-back wings, a "saw tooth" trailing wing edge and a centralized engine placement, straddled by an internal weapon bay. As an armed UAV (hence its "combat" designation), the AURA is expected to carry a pair of laser-guided bombs or similar (depending on mission scope). The DRDO AURA program is in its very early stages of design with certain aspects of the program still being addressed. Development of the AURA came to be largely due to the lack of interest in global suppliers of UCAVs willing to sell an existing system to the IAF. As such, a home-grown effort was born.

First flight of the system was optimistically planned for some time in 2015 with introduction into service expected in 2020. However, development of the indigenous solution has been slow.

The AURA will make use of many indigenously-designed and fabricated components, allowing the burgeoning Indian aviation industry to become ever-more independent of suppliers from Europe, Russia and the United States. The UAV will follow suit with other similar-class contemporaries and include full autonomy on missions with a data-link package offering hands-on control through ground stations as necessary. DRDO engineers have stated that the AURA will operate up to 30,000 feet and its internal weapons bay may be of the rail-launching type - capable of releasing missiles, laser-guided munitions or conventional drop bombs. Of note is the indigenous route being taken by the Indians in this initiative as much of the technology at play is largely new to the local aviation industry. Regardless, the government and associated participants remain very optimistic that the set project goals will ultimately be met. At any rate, the Aura will become a huge symbol of national pride for the country of 1.2 billion.

The initial prototype was not expected to be ready until 2015 but this came to naught - the technology demonstrator only recently went into the air for the first time in July of 2022.

Released computer drawings showcase a very elegant design forthcoming. A cut-away view envisions a top-mounted intake drawing air into the fuselage-mounted turbofan engine, the engine then exhausting through a horizontal slat-type opening at the rear for reduced radar signatures. The aircraft will further be coated in special radar-absorbing materials being developed within India. DRDO may, at some point, also partner with a European defense power to further the development envelope and bring the Aura online as soon as possible and possible with fewer kinks thanks to a lowered learning curve. At this early stage, however, only the planform of the airframe has been close to its finalized form.

As of this writing (2022), the AURA name is the project designation and may change during the lifecycle of this program. Adoption into service may coincide with India's first 5th Generation Fighter which has the potential to provide IAF pilots and warplanners with a potent "one-two" punch.©MilitaryFactory.com
Note: The above text is EXCLUSIVE to the site www.MilitaryFactory.com. It is the product of many hours of research and work made possible with the help of contributors, veterans, insiders, and topic specialists. If you happen upon this text anywhere else on the internet or in print, please let us know at MilitaryFactory AT gmail DOT com so that we may take appropriate action against the offender / offending site and continue to protect this original work.
Advertisements

monoplane / mid-mounted / swept-back
Monoplane
Design utilizes a single primary wing mainplane; this represent the most popular mainplane arrangement. Mid-Mounted
Mainplanes are mounted along the midway point of the sides of the fuselage. Swept-Back
The planform features wing sweep back along the leading edges of the mainplane, promoting higher operating speeds.
(Structural descriptors pertain to the base DRDO AURA production variant)
Installed: 1 x Non-Afterburning turbofan engine of unknown make, model, and thrust output.
(Showcased performance specifications pertain to the base DRDO AURA production variant. Compare this aircraft entry against any other in our database or View aircraft by powerplant type)
PROPOSED:
2 x Laser-Guided Bombs held in two internal bays. 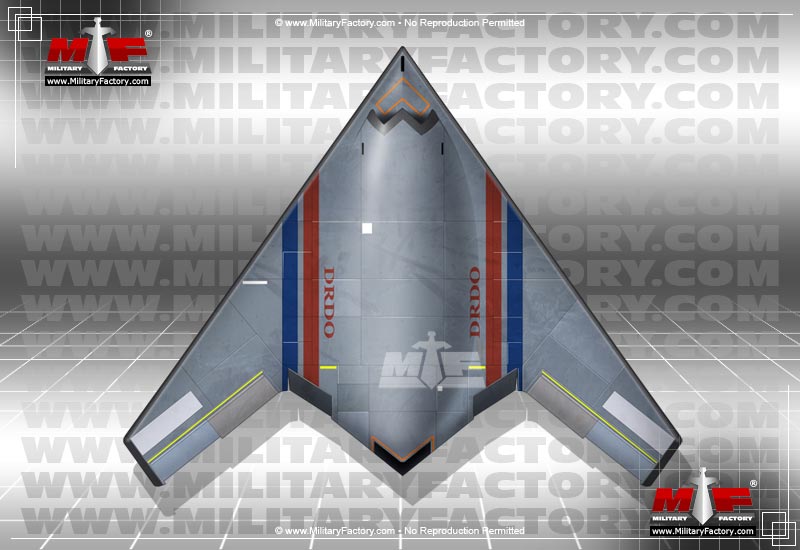 Aviation developments of similar form and function, or related to, the DRDO AURA...