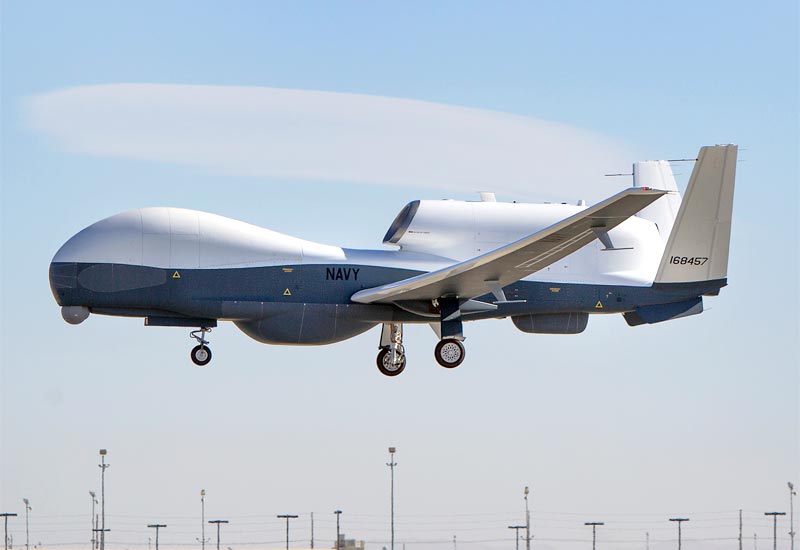 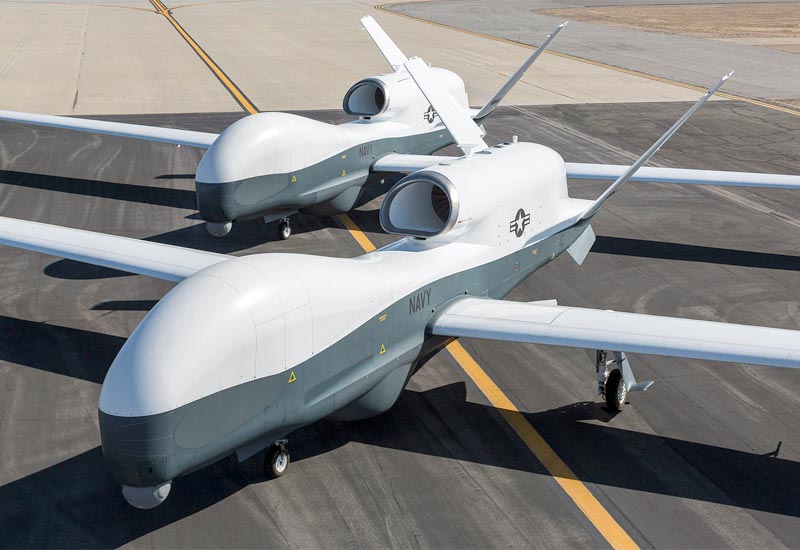 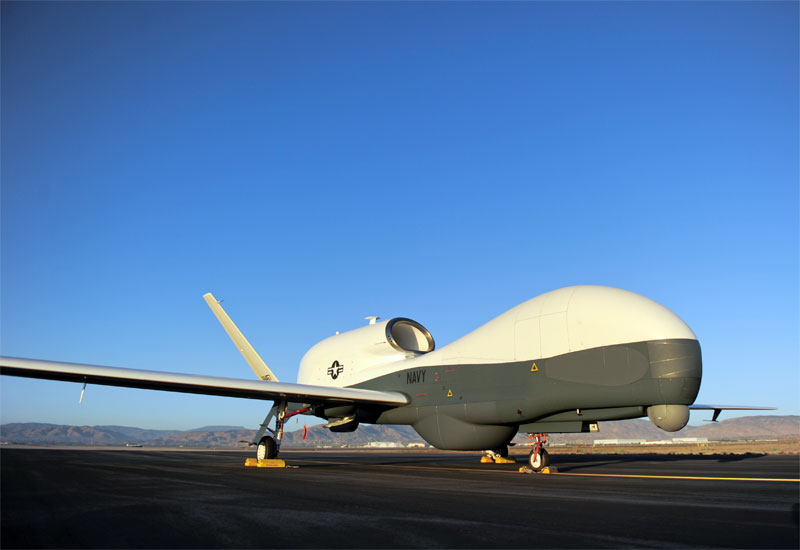 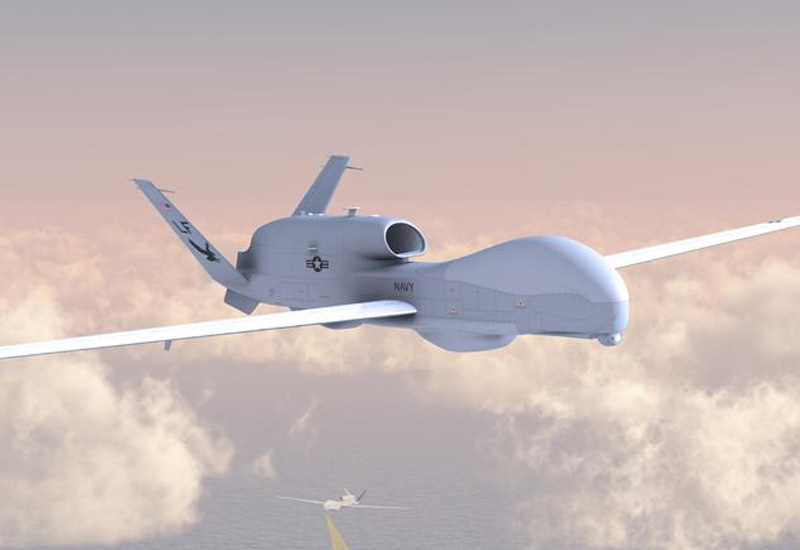 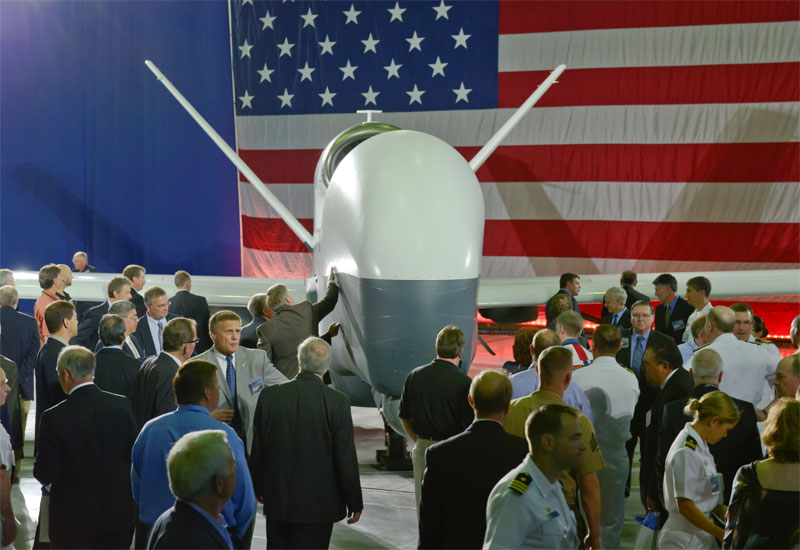 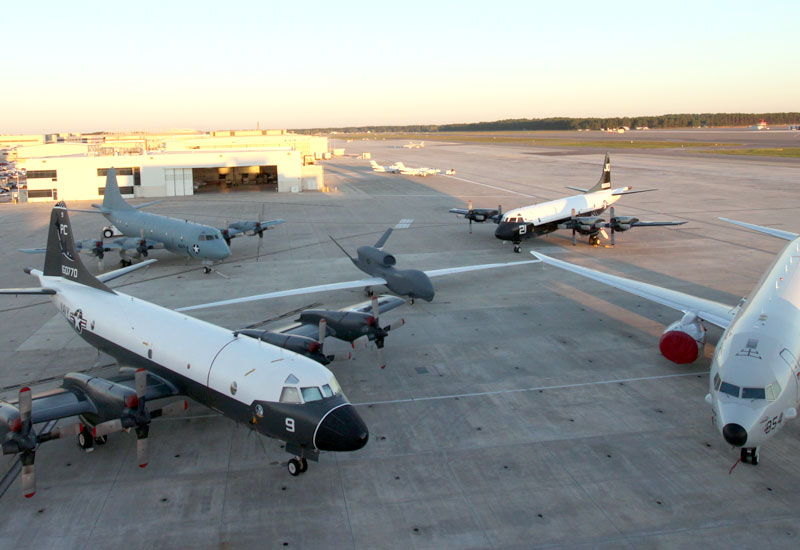 Image from the U.S. Department of the Navy.
❮ ❯

The Northrop Grumman MQ-4C Triton is the naval equivalent of the land-based RQ-4 Global Hawk UAV with notable changes to suit the maritime role.

The MQ-4C "Triton" unmanned aerial vehicle (UAV) represents a "navalized" form of the original Northrop Grumman RQ-4 Global Hawk with a few internal and external changes to suit the roles of maritime patrol, surveillance and anti-submarine warfare. The Triton is currently in development with five examples having been converted from existing RQ-4 systems for trials. The United States Navy is intending to procure some 68 MQ-4C aircraft which will stock its readiness fleet of 22 vehicles in the near future. The Triton UAV will work in conjunction with the Navy's streamlined maritime service force that now includes the up and coming Boeing P-8A Poseidon anti-submarine/anti-surface warfare aircraft.

The Triton is scheduled to be trialled through five BAMS-D (Broad Area Maritime Surveillance Block 10 - Demonstrator) development aircraft of which one has already been lost to accident following take-off in June of 2012. Onboard systems will include a Multifunction Active Sensor Active, Electronically Steered Array (MFAS AESA) radar suite with a 360-degree traversing function as well as an underfuselage, nose-mounted electro-optic/infrared video turret by Raytheon. The MFAS AESA has been trialed itself on a Gulfstream II series aircraft. The MQ-4C will also be outfitted with a VHF-based identification system allowing it to identify positions of maritime vessels in real-time.

While the finalized MQ-4C form will largely resemble the original RQ-4 Global Hawk and BAMS-D demonstrators, it will feature several notable changes to its overall design. The MQ-4C will showcase a bulged belly fairing containing the expected radar array as well as a small chin protrusion visual tracking system. The engine inlet will be encased in titanium while the wings, also longer in span, will be further reinforced for the rigors of over-water flight. Beyond these notable exceptions, the Triton will exhibit the same general external form as the original Global Hawk including its spine-mounted single engine fitting, straight wing appendages, retractable tricycle undercarriage and outward-canted vertical tail fins. Unlike the smaller Predator and Reaper UAVs, the Global Hawk/Triton family is not armed beyond its sophisticated suites of sensors, cameras and communications equipment.

Operationally, the Triton will be called upon to reach altitudes of 50,000 feet and stay on station for up to 30 hours - allowing for interrupted sorties that could theoretically span weeks on end. Operational ranges call for the coverage of 2,300 miles (2,000nm), drawing propulsion from 1 x Rolls-Royce AE 3007 series turbofan engine of 6,500lb to 9,000lb thrust. Maximum speed will be under 360 miles per hour with a maximum service ceiling listed at 60,000 feet. Four personnel will manage the ground station aspect of the Triton's function.

The goal of the Triton program is to provide the US Navy with a manageable, multi-role UAV solution that can relieve pilots of similar mission roles and retire use of more complicated, aged and expensive-to-maintain aircraft. With threatened military budgets beginning to appearing worldwide, the US Navy is forced to streamline its global activities to an extent. Considering the growing threat of instability in the Asian region, the power of the US Navy might come into play in the near future and systems such as the Triton will be put to good use.

The US Navy is planning for its fleet of Triton UAVs to be actively operational in service in 2015. First flight of an MQ-4C is expected by the end of 2012. The official unveiling took place in June of 2012. Some 30 testbed Triton aircraft are expected to be purchased. Tritons are scheduled to operate from bases in Hawaii, California, Florida, Italy, Japan and the British Indian Ocean (Diego Garcia).

May 2013- It was revealed that Australia had expressed interest in procuring the Triton UAV.

January 2015 - Germany expressed interest in the Northrop Grumman Triton product to fulfill a growing ELectronic INTelligence (ELINT) and COMmunications INTelligence (COMINT) need. The equipment (two underslung pods) is ready with no host aircraft to carry it since the demise of the "EuroHawk" (RQ-4E Global Hawk) UAV program in 2013.

January 2016 - Australia has committed to the MQ-4 Triton UAV. The Royal Australian Air Force (RAAF) is awaiting delivery of the MQ-4, as well as P-8 Poseidon aircraft, to broaden its maritime surveillance capabilities.

November 2016 - It was announced that the MQ-4C would be available for operational deployment in 2018. Initial deployment will be to Guam through VUP-19 squadron. While six examples are completed or nearing completion as of this writing, the USN remains contracted for 68 total operational-level aircraft. The aircraft are expected to serve into 2045.

March 2017 - Germany became the third operator of the Triton UAV system with a three-vehicle commitment. These will serve in the SIGINT (SIGnals INTelligence) role. Service entry is expected in 2025. This announcement follows the failed bid to get the EURO Hawk into the air for Germany. The country has been without a true SIGINT platform since 2010 when its fleet of Breguet Atlantic aircraft were retired.

November 2017 - It was announced that the United States Navy and Northrop Grumman were near-completion on the MQ-4C Triton's development, begun in 2008, bringing it one step closer to full operational service.

July 2018 - The Royal Australian Air Force has committed to the purchase of six MQ-4C Triton UAVs and will field these in conjunction with its fleet (currently numbering seven aircraft) of Boeing P-8A Poseidon maritime patrol aircraft.

September 2018 - An unmanned MQ-4C Triton aircraft of the U.S. Navy suffered damaged during a landing accident when one of its landing gears failed to extend on September 12th, 2018. The incident took place at NAS Ventura County in California and was preceded by an operator-directed engine shutdown warranted by an in-flight issue.

January 2020 - The United States Navy has deployed its first MQ-4C examples to the island of Guam. This marks the first operational deployment for the product line.

March 2020 - The Trump Administration has proposed a temporary stoppage to production of the MQ-4C for Fiscal Year 2021 and 2022 to better focus on the MQ-4C's multi-intelligence systems (IFC-4).

June 2020 - Australia has committed to a third example of the MQ-4C to further bolster its unmanned reconnaissance fleet.

November 2020 - Northrop has begun construction of the initial MQ-C Triton destined for Australia.

August 2021 - The MQ-4C Triton has flown for the first time in its new Multi-INT configuration. The configuration sees a focus on Multi-INTelligence equipment for the enhanced ISR role.

(Showcased performance specifications pertain to the Northrop Grumman MQ-4C production variant. Compare this aircraft entry against any other in our database. View aircraft by powerplant type)
None. Payload of sensor and camera equipment.

MQ-4C "Triton" - Base series designation; based on the RQ-4 "Global Hawk".

Values are derrived from a variety of categories related to the design, overall function, and historical influence of this aircraft in aviation history.
Overall Rating
The overall rating takes into account over 60 individual factors related to this aircraft entry.
56
Rating is out of a possible 100 points.
Relative Maximum Speed
Hi: 400mph
Lo: 200mph
This entry's maximum listed speed (357mph).