The Italian Alenia Aermacchi M-346 Master is based off of the promising Russian Yakovlev Yak-130 advanced trainer-light strike series of aircraft.

Authored By: Staff Writer | Last Edited: 01/28/2022 | Content ©www.MilitaryFactory.com | The following text is exclusive to this site. 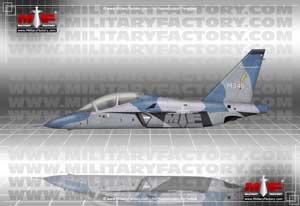 The advanced jet trainer/light strike market has grown considerably over the last several decades. This class of aircraft allows budget-conscious operators the ability to train their pilots in an all-modern jet aircraft while retaining light strike capabilities in its design. However, light strike aircraft are generally limited in a tactical sense and can only serve in basic close-air support, attack and air defense sorties. They generally lack the capabilities and facilities of their larger brethren - the multirole fighter - though they have proven exceedingly popular in global air forces. The new Alenia M-346 "Master" is one such contribution to the aircraft category and is based on the equally-new Russian Yakovlev Yak-130.

The Alenia M-346 emerged from a former partnership between the Italian and Russian concerns during the early 1990s as Yakovlev had begun undertaking development of a new advanced trainer for the Russian Air Force. The Italian Air Force similarly sought a replacement for its aging fleet of MB-339 aircraft and signed on to a joint development effort with the Russian firm to design a new advanced trainer/light strike platform based on the Yakovlev endeavor. The Russian prototype flew for the first time in 1996.

By the turn of the century, the joint venture had dissolved due to design directions Yakovlev continued its pursuit of the Yak-130 while Alenia evolved their version along Western-centric lines hoping to capitalized on lucrative future procurement deals. As such, the Italian initiative has been developed with Western-based avionics, technology and support for Western armament. The Italian aircraft soon emerged as the M-346 "Master" in 2003 and recorded its first flight on July 15th, 2004. Over the next several years, the M-346 project gained additional traction as it generated interest from other global participants. During this time, the undercarriage was also revised, overall construction lightened and simplified wherever possible and a new, more efficient, airbrake was introduced. The M-356 is currently in late-stage development as of this writing (2012) with the list of potential buyers consistently growing.

The Italian Air Force is already committed to procuring the M-346 product (13 aircraft on order) and low-rate serial production is expected to begin soon. The United Arab Emirates evaluated the type and has committed to purchasing it as well (tentatively 48 total aircraft). Similarly, the Israeli Air Force (30) and Singapore (12) have selected the M-346 to become their next generation advanced trainers. The United States Air Force, currently in the market to upgrade its aging trainer fleet (which numbers in the hundreds and may include procurement of over 1,000 units from a given provider), has also shown some interest in the M-346 though its selection in the ongoing "T-X" program is considered a long shot.

Design of the M-346 is conventional featuring a tandem seat cockpit, mid-mounted monoplane wing assemblies and a traditional empennage. The student/primary pilot sits in the front cockpit with the instructor/ weapons officer in the rear cockpit. Vision out of the cockpit is excellent thanks to the use of a large, lightly-framed clear canopy. The rear view is obstructed by the raised fuselage spine. The cockpit sits behind a short and shallow nose cone assembly which permits excellent vision during ground travel. The fuselage is well-rounded at the edges with slab-sides promoting good aerodynamic flow. The aircraft is powered by a pair of engines buried within the fuselage and aspirated by a pair of intakes situated to either side of the cockpit and under each wings. The fuselage is short in its length and capped at the rear by a tall vertical tail fin. Horizontal tailplanes are fitted noticeably well-aft of the vertical tail fin while the engines exhaust under and ahead of the horizontal tailplanes through basic exhaust rings. The undercarriage is fully retractable and made up of a pair of single-wheeled main legs and a single-wheeled nose leg.

The M-346 will be powered by a pair of Honeywell F124-GA-200 series low-bypass turbofan engines, each generating 6,250lb of thrust. While the aircraft will be capable of Mach 1.2 speeds, it will generally operate at lower speeds when on basic cruise. Service ceiling is listed at 45,000 feet.

While the trainer versions will be generally unarmed or lightly-armed for practice, the dedicated light strike forms will be able to carry ordnance across nine total hardpoints - three under each wing, one at each wingtip and a sole position along fuselage centerline. Up to 6,600lbs of external stores will be allowed and this will include typical loadouts of air-to-air missiles (primarily at the wingtip mounts), air-to-surface missiles, guided munitions, conventional drop bombs, rocket pods and cannon pods. Three hardpoints are plumbed for accepting jettisonable fuel stores - the inboard-most underwing hardpoints and the fuselage centerline hardpoint. The M-346 will also sport a fixed aerial refueling probe ahead of the cockpit and offset to the starboard side. Such flexibility will allow the M-346 to undertake a variety of attack missions as needed and provide essentially unlimited operational ranges in a given theater.©MilitaryFactory.com
Note: The above text is EXCLUSIVE to the site www.MilitaryFactory.com. It is the product of many hours of research and work made possible with the help of contributors, veterans, insiders, and topic specialists. If you happen upon this text anywhere else on the internet or in print, please let us know at MilitaryFactory AT gmail DOT com so that we may take appropriate action against the offender / offending site and continue to protect this original work.

September 2014 - Singapore has adopted the M-346 to overtake its aged line of Douglas A-4 Super Skyhawks as advanced jet trainers. With deliveries begun in 2012, a squadron has been arranged in France for formal training (Singapore lacks the necessary airspace). Some 12 M-346 aircraft make up the total Singaporean stock.

September 2015- It was announced that the Italians are set to begin M-346 training.

February 2016 - It was announced that Raytheon will be backing the M-346-based "T-100" as its entry into the USAF's advanced trainer competition known as "T-X". The design will sport 2 x Honeywell F124 turbofan engines and compete with the Lockheed-backed South Korean KAI T-50A offering (among others). The competition seeks to replace the aging stock of T-38 Talon trainers currently in service.

March 2016 - It was announced that Italy had ordered an additional nine M-346 advanced jet trainers.

July 2016 - it was announced that Leonardo-Finmeccanica is working to actively sell the light attack version of its M-346 Master advanced jet trainer. An example is to be displayed at Farnborough 2016 with service introduction estimated for 2018.

January 2017 - It was announced that the Raytheon / Leonardo team has withdrawn their T-100 entry for the USAF T-X trainer competition.

February 2017 - Apparently Leonardo is now teamed with DRS Technologies and is still hopeful in competing in the USAF T-X trainer competition. DRS will act as the U.S.-based representative of the deal. If selected, Leonardo plans to construct the M-346 at a new plant near Moton Field in Tusgekee, Alabama.

April 2017 - On April 12th, 2017, a prototype light-attack version of the M-346 was unveiled by Leonardo. Wingtip missile rails, an additional two hardpoints and a radar fit (FIAR Grifo-M) are just some of the improvements to the base trainer aircraft to make it more of an attack platform.

March 2018 - Poland has contracted for an additional four M-346 advanced trainers from Leonardo. This brings the total M-346 fleet count to twelve aircraft. The four in question will be delivered prior to 2020. An optional four more airframes are also possible before 2022.

July 2019 - The KAI FA-50 and Leonardo M-346FA are in the running to succeed the Argentine Air Force's aging fleet of A-4AR "Fightinghawk" fighters. Eight to ten aircraft are sought in the deal.

August 2019 - Leonardo has announced an unnamed buyer/launch customer for its M-346FA Fighter-Attack version of the M-346 Advanced Jet Trainer / Light Strike platform. The deal was reportedly struck in July of 2019 and constitutes six total aircraft. The variant is set to be type certified before the end of the year.

November 2019 - Austria has been named a possible launch customer for the light-attack version of the M-346 Advanced Jet Trainer.

February 2020 - Leonardo is in talks with Azerbaijan to arrange local Azerbaijani production of the M-346 Advanced Jet Trainer. A memorandum of understanding has been signed.

August 2020 - Leonardo is offering its M-346 to Australia to fulfill its standing Advanced Jet Trainer requirement.

January 2021 - A joint-initiative involving Leonardo and Israeli-based Elbit Systems will result in a Hellenic Air Force flight academy for its new M-346 advanced jet trainers. The service has ordered 12 M-346 "Lavi" AJTs in a January 2021 announcement.

August 2021 - Turkmenistan has been revealed as the launch customer for the M-346FA light attack variant.

(Showcased performance specifications pertain to the base Leonardo M-346 Master production variant. Performance specifications showcased above are subject to environmental factors as well as aircraft configuration. Estimates are made when Real Data not available. Compare this aircraft entry against any other in our database or View aircraft by powerplant type)
When armed, mixed ordnance possibilities include air-to-air missiles / air-to-ground missiles, rocket pods, gun pods, conventional drop bombs, and jettisonable fuel tanks across seven total hardpoints (including wing tips). 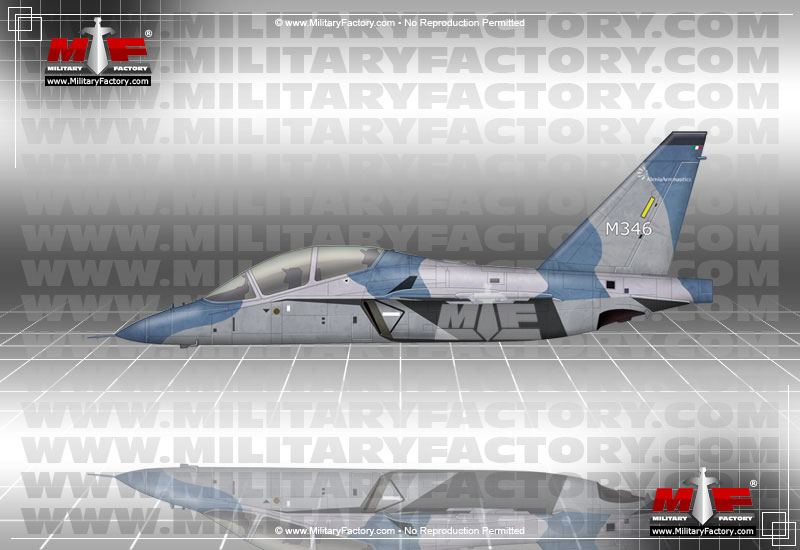 Aviation developments of similar form and function, or related to, the Leonardo M-346 Master...