Despite entering service with the Russian Air Force in 2009, overall quantitative deliveries of the Yak-130 have been slow.

Authored By: Staff Writer | Last Edited: 11/14/2021 | Content ©www.MilitaryFactory.com | The following text is exclusive to this site. 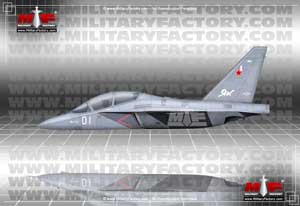 Advanced jet-powered trainers with secondary strike roles are becoming an ever more growing presence on the modern battlefield due to their initial procurement costs (this usually in some great number), long-term maintenance costs and inherent dual-role functionality. Such aircraft allow a potential operator the ability to train all-new generations of airmen while maintaining a limited attack capability in their fleet of lightweight systems - making them highly appealing to budget-concious interested parties. The Yak-130 (NATO: "Mitten") is Yakovlev's entry into the crowded field, bringing with it a strong company lineage dating back to 1934 and modern-minded modular capabilities that have primarily garnered it the interest of the Russian Air Force to date. Irkut Corporation handles manufacture of the Yak-130 though an export-minded derivative for Western clients is also being developed as the M-346 "Master" under the Alenia Aermacchi brand label of Italy.

One of the key qualities of aircraft systems like the relatively new Yak-130 is the ability to recreate the operating environment and handling of modern fighting jets. For the Russian Air Force, this also includes mimicking the qualities of their upcoming Sukhoi T-50 PAK FA 5th Generation high-performance stealth fighter as well as current 4th Generation mounts already in inventory. The PAK FA stealth fighter is a direct competitor to the American F-22 Raptor and only one of a now-growing number of such aircraft in the world. Similarly, the Chinese are working on their Chengdu J-20 twin engine initiative.

Design of the Yak-130 is highly conventional for aircraft of this class yet wholly modern. The fuselage is well-contoured for the high-performance role, featuring a pointed beak-like nose cone assembly, forward-set cockpit and dual-engine layout. In two-seat versions of the aircraft, the pilots sit in tandem with the student (primary) pilot in the front cockpit and the instructor (secondary) pilot in the rear cockpit. Both benefit from the aircraft's use of a large unobstructed canopy which rewards with excellent vision to all regions of the aircraft save for the slightly blocked rear view due to the fuselage's spine. The wings stem from extended forward root edges along each cockpit side and are lightly-swept along the leading edges and straight along their trailing edges, both assemblies able to support up to 3,000 kilograms of external ordnance with the two innermost hardpoints being plumbed for fuel jettisonable fuel stores. The Yak-130 makes use of a pair of conventional horizontal tailplanes and a single vertical tail fin, the latter emanating from above and between the two exhaust ports. The dual-engine layout is aspirated by a pair of well-recessed, oblong air intakes fitted to either side (and aft) of the rear-most cockpit area. The undercarriage is fully retractable in the usual sense and consists of two single-wheeled main landing gear legs and a single-wheeled nose landing gear leg. As detailed below, the Yak-130 comes in a twin-seat form and a single-seat form, the latter for more dedicated roles.

The Yak-130 is powered by a pair of Progress AI-222-25 series turbofans with each installation rated up to 5,500lb of thrust. These supply the airframe with a listed top speed of 644 miles per hour (cruise speed is in the general vicinity of 550 miles per hour) while the aircraft's internal fuel allows for an operational range of 1,600 miles. Its pressurized cabin and high-thrust engines allows operations up to 42,600 feet. Rate-of-climb is a reported 10,000 feet-per-minute.

While inherently a two-seat advanced jet trainer first, the Yak-130 retains a somewhat limited - albeit still potent - capability to launch self-supported strikes against both ground and air target thanks to its multirole nature. The two-seat approach ultimately divides mission loads between the two pilots in the attack role while also bringing along a "second pair of eyes" beyond that of just the single pilot (as well as any onboard sensor equipment being fitted). Light strikes serve such a lightweight airframe well as the multi-faceted wings can take on mixed ordnance loads that include air-to-air missiles, air-to-ground missiles, anti-radar missiles, laser-guided munitions, conventional drop bombs, gun pods and rocket pods as well as additional fuel stores (this across nine external hard points, three under each wing). A modern approach to design ensures quick turn-around times between sorties and compatibility with the latest in Russian military hardware. Beyond its light strike role, the Yak-130 can also be outfitted with various sensor and surveillance equipment to undertake general reconnaissance as needed. Such flexibility is at the heart of advanced trainer/light strike mounts like the Yak-130 and copied across like-type aircraft all over the world.©MilitaryFactory.com
Advertisements

First flight of the Yak-130 was recorded on April 26th, 1996 and, after several years of extended testing, evaluation and finalization, the Yak-130 was formally introduced into service with the Russian Air Force in February of 2010 at the cost of $15 million per unit. To date, 27 aircraft have been delivered with 11 having since entered service with the Russian Air Force in July of 2009. Russia maintains a standing order of several dozen aircraft and is expected to procure several hundred before the end. It is noteworthy that one Yak-130 was already lost to accident in May of 2010 though both pilots were able to eject safely. Beyond its service with the Russian Air Force, the Yak-130 has piqued the interest of the air forces of Algeria, Vietnam and Syria with as many as a dozen more or so "potential" customers possibly upcoming (according to manufacturer Irkut). To date (2012), Algeria manages 16 of the type while Vietnam has put on order 8 examples. Syria stands to become the largest foreign operator of the aircraft (and is a long standing Soviet/Russian customer) and has settled on an order for 36 aircraft. However, current civil upheaval across the country now brings in doubt as to their actual deliverable status. Similarly, an order for six Yak-130 aircraft to Libya has been stalled when internal political events disrupted government functions in 2011. The purchase is in queue for formal review along with several other standing military orders by the transition government.

At any rate, the Yak-130 will come about at a time when many-an-air force will seek to update outgoing, outmoded aircraft of the same classification. For Uruguay this potentially means replacing their decades-old fleet of Cessna A-37 "Dragonfly" straight-wing, dual-role aircraft while, for the United States Air Force, this means formal retirement of their long-running Northrop T-38 Talon jet-powered trainers. The USAF was at one time mentioned as a potential customer for the Yak-130 derivative - the in-development Alenia Aermacchi M-346 "Master" - for its USAF T-X competition. While a long-shot to have made any progress in the upcoming competition, it has since been ruled out by Irkut. The deal would have been potentially massive, with 350 initial T-38 Talons being replaced and the final numbers could have reached 1,000 units in time. As it stands, the Yak-130/M-346 will not be in competition to become the USAF's next primary jet trainer - other potential candidates include the Lockheed/KAI T-50 "Golden Eagle" and the British BAe "Hawk" and Boeing is also said to be in the running with an all-new design. Saab is another mentioned party though while becoming a long shot to compete, their entry a possible Gripen-based design.

There are four major versions within the Yak-130 family and this includes the basic trainer which is identified simply as the "Yak-130". The Yak-130 represents the basic twin-seat advanced trainer with secondary strike facilities. The Yak-131 is a more defined strike platform sans the second (instructor's) cockpit position to allow for more internal volume (fuel, avionics). The Yak-133 is a dedicated single-seat reconnaissance mount. The Yak-135 is the most interesting version of all, featuring seating for four persons in the VIP transport role.©MilitaryFactory.com
Note: The above text is EXCLUSIVE to the site www.MilitaryFactory.com. It is the product of many hours of research and work made possible with the help of contributors, veterans, insiders, and topic specialists. If you happen upon this text anywhere else on the internet or in print, please let us know at MilitaryFactory AT gmail DOT com so that we may take appropriate action against the offender / offending site and continue to protect this original work.

December 2017 - It has been reported that Myanmar has received the first of its Yak-130 Advanced Jet Trainer aircraft for its air force service.

November 2018 - Bangladesh has received the first of its Yak-130 Advanced Jet Trainers as their air service modernization (tom be completed by 2030) continues.

(Showcased performance specifications pertain to the base Yakovlev Yak-130 (Mitten) production variant. Performance specifications showcased above are subject to environmental factors as well as aircraft configuration. Estimates are made when Real Data not available. Compare this aircraft entry against any other in our database or View aircraft by powerplant type)
1 x 30mm GSh-301 OR 23mm GSh-23 cannon in underfuselage pod.

(Not all ordnance types may be represented in the showcase above)
Hardpoint Mountings: 9

General Assessment
Firepower
Performance
Survivability
Versatility
Impact
Values are derrived from a variety of categories related to the design, overall function, and historical influence of this aircraft in aviation history.
Overall Rating
The overall rating takes into account over 60 individual factors related to this aircraft entry.
80
Rating is out of a possible 100 points.
Relative Maximum Speed
Hi: 750mph
Lo: 375mph
This entry's maximum listed speed (652mph). 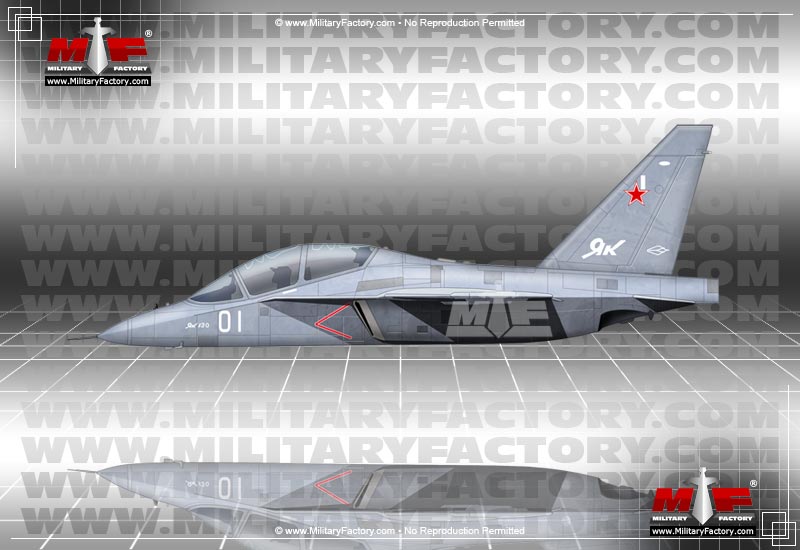 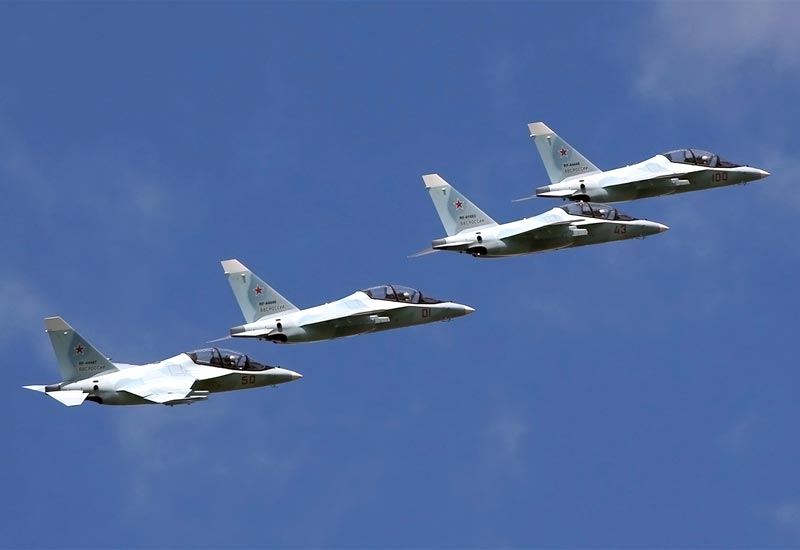 Image from the Russian Ministry of Defence.
❮ ❯

Aviation developments of similar form and function, or related to, the Yakovlev Yak-130 (Mitten)...