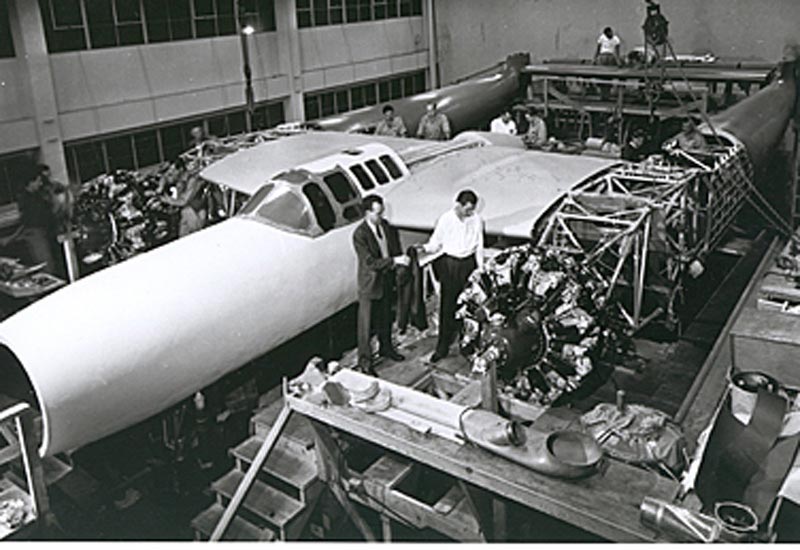 Known under many designations, the Hughes Model D-2 suffered through its ever-changing developmental life - seeing only one prototype partially completed.

The Hughes Model D-2 was born around 1937 to compete for the US Army Air Corp's (USAAC) contract for a twin-boom "fast fighter". Government authorities deemed the Hughes submission too slow for the role, lacking the appropriate rate-of-climb for their requirement, and subsequently handed the development contract to competitor Lockheed and their "XP-38" prototype. The XP-38 would eventually evolve to become the war-winning P-38 "Lightning" pursuit fighter, the famous single-seat, twin-engine, twin-boom "Fork-Tailed Devil as it was known to the Germans". The result of the selection, no doubt, added to Hughes' already growing suspicions that the US military would never accept a Hughes-designed aircraft for military service simply because of Hughes' involvement. Nevertheless, work on the D-2 continued as a private venture with hopes of selling the US military on a "can't miss" product in the end.

Development continued into 1938 for Hughes also saw the D-2 as a chance to set new aviation records and further establish his legacy as an aviation pioneer. At this point, the D-2 was already fleshed out as a twin-engine, twin-boom design with a centralized nacelle containing the cockpit, avionics and fuel stores. The rear of the booms held the vertical tail fins and a connecting horizontal plane - the design similar to the competing XP-38 by Lockheed with Hughes believing the company had stolen his configuration. However, the Hughes design was intended for a full crew of five (as opposed to two) and was given a "tail dragger" undercarriage design (as opposed to tricycle) - at least on paper. Additionally, the aircraft was to be constructed of Duramold, the special plywood process obtained under license by Hughes - the thought being that use of wood, in a mass production sense for the military, would not require quantities of valuable aluminum - a common material to aircraft of the period. This would prove logistically sound under the pressures of a wartime economy.

The Duramold process involved birch, high pressures and temperatures which would allow for the material to be molded into the various shapes required. The end result was a rigid structure that was lightweight. Conversely, the process required a certain degree of effort to produce which could potentially slow production on a large scale. To go along with the airframe approach, Hughes centered on a pair of high-powered engines in the Wright XR-2160 "Tornado" to which the USAAC allowed Hughes access. The engines would drive four-bladed propeller assemblies. In 1939, Hughes convinced the USAAC's Material Division of a new pursuit fighter to which a contract was signed on May 22nd, 1940. Earlier in the year, Hughes Aircraft established a new facility at Culver City, California in early 1940 to further his D-2 goal.

The original design involved a top speed of 300 miles per hour with a bomb load of up to 4,000lbs and considered for a bombing role - hence its multi-person crew. A glazed-over nose cone would assist in the level bombing role and an internal bomb bay would be installed aft of the cockpit, under the main spar of the wing assemblies. However, as would be the case throughout the D-2's life, the design wasaltered in March of 1941 to become a two-seat, long-range fighter now fitting turbosupercharged engines and featuring an operational range of 2,600 miles, a top speed of 450 miles per hour and an armament of 6 x 0.50 caliber heavy machine guns. In May of that same year, the design was changed, yet again, by the USAAC to fulfill the bomber escort role which required endurance, appropriate armament and agility. It was this sort of rocky developmental life that allowed the Model D-2 to accrue a variety of official and unofficial designations throughout its existence. The official (and original) Hughes company designation was D-2 and the in-house designation for its militarized form was to be Model D-3. The D-2 then came known under the designation of D-2A and afforded various experimental modifiers in the XD-2 and DX-2 for a time. Also at some point, a three-seat light bomber version was entertained as the Hughes Model D-5.

After the surprise attack by Japanese naval forces on Pearl Harbor, Hawaii, in December of 1941 the United States officially entered World War 2. On June 30th, 1942, the Hughes design was still more or less in play and had been granted the official military experimental designation of "XP-73". Should the vehicle have gone into serial production, it would have attained the official production model designation of "P-73" as well as some sort of USAAC name. However, the following month, the Model D-2 was already being written in official USAAC papers as the "XA-37" for whatever reason - possibly for an attack-minded role as the "A-37".

As the war progressed, the USAAC was interested in all manner of war-making goods. While not completely sold on the idea of the Duramold process and a wooden fighter-bomber, it was an interesting alternative to an all-aluminum fighter, particularly under the resource stresses of war. Indeed, the British found considerable success with their de Havilland "Mosquito" fighter-bomber, nicknamed the "Wooden Wonder" for its heavy use of wood in its construction. Despite attempts by USAAC authorities to garner more information on Hughes' progress of the Model D-2, little information was made available by the company - the aircraft was developed under a huge veil of secrecy which hampered the issue of bringing the D-2 to light as a viable military platform. Hughes himself did not help matters but still funded the foundering project himself which helpful to the US military. When the D-2 program began to fall under threat from Material Division losing interest, Hughes pulled his political strings to remain in play. However, he passed on official government support so as to keep the D-2's development firmly in his own control.
Advertisements

Construction of the airframe continued under Hughes' direction though delays in the Wright Tornado powerplants forced Hughes to procure the lower-rated Pratt & Whitney R-2800-49 series instead. Another change to the arrangement was use of three-bladed propellers as opposed to the originally intended four-bladed types. The engines were also to benefit from a Hughes Aircraft-designed turbosurpercharger for increased performance. The aircraft was fully assembled - again, under secrecy - at Harpers Dry Lake, Muroc. The design had also finalized into a two-seat cockpit with intended pressurization for high-altitude work. The tail-dragger undercarriage was dropped in favor of the more forward-thinking tricycle arrangement. In this configuration, the Model D-2 was expected to top speeds of 445 miles per hour and feature a 1,000+ mile operating range under full combat load - though these were estimates.

In the spring of 1943, with the war in full swing, Hughes took to the controls of his D-2. At this point, the aircraft still lacked its in-house turbosuperchargers and cabin pressurization but scheduling called for ground runs of the system to which Hughes completed himself. However, the tests unveiled control issues which would have to be rectified for serious military consideration. The airframe's first formal flight was recorded on June 20th, 1943 and the control issues were ever more apparent to the point that the airframe would require a considerable modification, particularly at the wings. With little choice, Hughes engineers increased the span of the main wing assemblies, added flaps to the outboard areas and extended the trailing edges yet these changes would not entirely fix the problems and a more major redesign was in order.

At any rate, the Hughes D-2 was eventually dropped from all serious contention before the war had ended, its roles fulfilled by a bevy of other competing types. Beyond Hughes' own antics, the USAAC was not thoroughly convinced of the concept of an all-wood military plane in the age of metal ones. Additionally, there were questions as to the Hughes' commitment to his own project and the ability of Hughes facilities to produce the number of aircraft required of the war effort. The design was never fully cleared of its design flaws and the secrecy around the aircraft hurt USAAC chances of even seeing the in-development product. US Army interest in the product was over on August 13th, 1943.

Of all of the D-2's development, the aforementioned three-seat D-5 alternative held some military merit and three distinct forms were penciled out with the first being the dedicated light bomber form. A second model was intended to fulfill the role of escort fighter and feature a crew of two. To this was added a third model - a long-range, two-seat reconnaissance-minded platform lacking armament. It was this particular entry that struck a chord with US air power authorities for it was seeking such a platform for long-endurance reconnaissance work. The role was eventually shared by many converted fighter designs featuring photographic-reconnaissance equipment. The base D-5 design - apart from the unarmed reconnaissance version - was to incorporate a remote-controlled powered turret in the rear section of the fuselage nacelle, fitting 4 x 0.50 caliber Browning heavy machine guns for defense. The escort fighter form was to be further armed with 6 x 20mm cannons in the nose.

With so much work already completed on the D-2, Hughes Aircraft continued along the same route to develop a long-range reconnaissance platform for US military interest. This could prove particularly useful along the span of Pacific Ocean in the fight against the Japanese Empire. The singular D-2 prototype was lost to what was deemed a random "lightning strike" while in its hangar on November 11th, 1943. The design was resurrected, to an extent, in the upcoming Hughes product - the ill-fated and ultimately abandoned "XF-11" reconnaissance platform. The aircraft featured a similar twin-boom design and two prototypes were completed. One aircraft would nearly claim the life of Hughes himself while at the controls in his much-publicized crash. The XF-11 is detailed elsewhere on this site.

(Showcased performance specifications pertain to the Hughes Model D-2 (XA-37) production variant. Compare this aircraft entry against any other in our database. View aircraft by powerplant type)
Highly variable throughout development. Proposed:

At one point up to 4,000lbs of conventional drop ordnance in an internal bomb bay.

Values are derrived from a variety of categories related to the design, overall function, and historical influence of this aircraft in aviation history.
Overall Rating
The overall rating takes into account over 60 individual factors related to this aircraft entry.
34
Rating is out of a possible 100 points.
Relative Maximum Speed
Hi: 500mph
Lo: 250mph
This entry's maximum listed speed (432mph).